Attack of the Attack Ads: Citizens United and the 2012 Elections 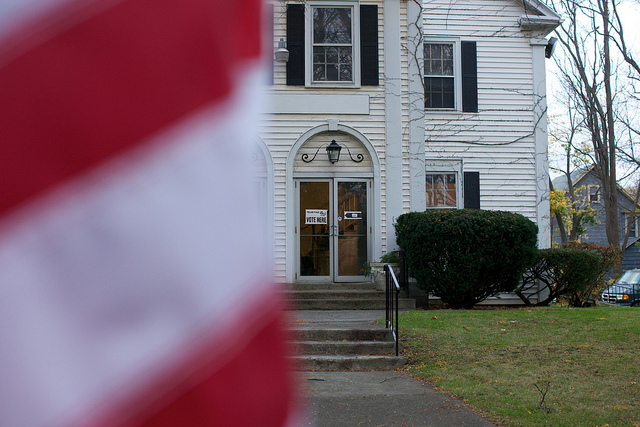 Photo of election day by "Joe Philipson":http://philipsonphotography.com/ on "Flickr":http://www.flickr.com/photos/jphilipson/ and used here with Creative Commons license.

In 2012, two tidal waves will reconfigure the American electoral system and the news media that cover it. A tsunami made of money will buoy up the structure of entrenched political power, while a huge wave of personal technology will disrupt it.

I can predict both of these events with certainty because they’ve happened every election year over the last couple of decades. Still, the changes in 2012 may be dramatic. Angry citizens around the world have been using a potent combination of mobile phones, social networking and broadcast television to upend established political orders. Now it’s Americans who are angry, and this election could spark a new level of activism leveraged by these same tools. At the same time, this will be the first general election since the so-called “Citizens United” Supreme Court decision, which tossed out the last vestiges of regulations limiting campaign financing. Among other effects, this will translate into a record numbers of attack ads next fall. Taken together, these two changes may profoundly affect our democracy, and they deserve a closer look.

"Journalists are smart, but the problem is, you are going up against even smarter people who work in public relations. Truth is the underdog in American political speech." -Bob Calo

In June of this year, Hollywoodreporter.com headlined, “Moody’s Predicts Record Political Ad Spending for TV Station Groups in 2012.” In one breathless run-on sentence, the article explained: “Broadcasters benefited from a Jan. 2010 Supreme Court decision [known as Citizens United] that effectively ended spending caps for political ads, so, unlike in 2004 and 2008, the presidential election next year will happen without limits on campaign spending by corporations or unions.”

There has not been much in the way of analysis of how the astronomical levels of campaign cash will affect the news ecosystem. Because the new funds will enrich local TV stations, one could argue that this has nothing to do with news reporting. Perhaps all local TV boats will rise with the tide, including the news dinghy.

But the relationship may be more complex than that, and there have been intriguing signs and portents in recent years: Sarah Palin is famous for advising a beleaguered Tea Party candidate to speak only to Fox News, and other candidates are increasingly avoiding interviews. Both reporters and citizens have relied on Town Hall meetings as moments where unscripted hints can surface, but ever since the disastrous Town Hall meetings in the summer of 2009, Democrats are increasingly replacing Town Hall meetings+ with conference calls. Now, candidates of both parties have retreated behind a “conference-call wall,” diminishing democracy in the process.

It’s not surprising that candidates would rather not speak to troublesome reporters or a querulous public, who are in one sense their natural enemies. But now, with their new wealth, will candidates reject news appearances, as they have Town Hall meetings, using ads as a kind of counter-programming? Will attack ads begin to look like faux news reports in attempts to offset reporting with well-financed propaganda?

“It may take a cycle of awful attack ads to realize that something more needs to be legislated,” said Seth Korman, a lawyer and legal writer, who nonetheless cautioned that it’s unclear whether “courts will look favorably on new prohibitions on political speech.” Korman noted in the Rutgers Law Record+ that the Citizens United decision “expands the legal definition of the press” by granting rights once reserved for the news media to all corporations. The Supreme Court’s thinking, said Korman, is that “everyone should be able to editorialize.” But, as he pointed out in a related article in the Huffington Post, non-profits, including non-profit news organizations, remain restricted in their “ability to ‘influence legislation’ or ‘participate’ in a political campaign.” He asked, “If the bar on free-speech restrictions has been so lowered for some corporations, why must it remain for others?”

Attack of the Attack Ads

One troubling aspect of the coming expansion of attack ads is that, because their content is protected by the First Amendment, they are less regulated than other forms of commercial speech. In 2004, a group called Swift Boat Veterans for Truth launched a series of attack ads against presidential candidate John Kerry and other Democrats. The Federal Election Commission later fined the group, and its liberal counterpart MoveOn.org, because they “crossed the line with overtly partisan 2004 campaign activities,” as the L.A. Times reported in 2006. These groups were not censured for what we might call lying, but for “failing to register as political committees.” With the passage of Citizens United, the rules on which that judgment was based no longer apply.

There are regulations that prohibit lying in political ads, but the laws are overseen by an alphabetic welter of federal agencies — the FEC, the FCC, the FTC — and by state regulatory agencies. Not surprisingly, regulations often diverge or lag; most agencies are only just beginning to grapple with the Citizens United Decision (see this on the FEC, and bookmark the site Election Law Blog, the best place to track the evolving situation).

The FEC, for one, is staffed by political appointees with conflicting political agendas. Typically, the punishment for lying in political ads is a fine, levied months or years after the election, providing small comfort to the candidate victimized by false statements. For example, in 2009 the creator of an untrue attack ad on the city of Coeur d’Alene, Idaho, aired in 2007 paid the city $2,500 to settle a lawsuit. In June of this year, the North Carolina Republican Party issued a formal apology to a representative who was narrowly defeated for an untrue campaign mailer sent in November 2010.

Following the passage of Citizens United, Radio Broadcasting Report, the online media industry site, ran a long article titled “Broadcaster’s Liability After Citizens United.” It strived to soothe worried media execs by laying out exactly how the process works when “faced with allegations of libel, slander, fraud or misrepresentation regarding a public figure.”

The article explained that the FCC’s “standard for broadcaster responsibility for truth or falsity in the context of political matter [is that] each licensee may exercise its own judgment as how best to serve the public interest by presenting contrasting views…” The article advised its readers to “ask the sponsor of the ad for justification. If the response appears reasonable, the Commission and the courts do not require that the broadcaster be the guarantor of its truth.”

Back in 2007, Factcheck.org wrote a thorough piece on the legal ramifications for attack ads that stretch the truth, citing a number of examples from the “handful of states” that have laws on the books prohibiting lies in political ads. In two of three cases, the perpetrators were acquitted; in one case, the guilty party “paid no real penalty for the false ad, except for some unfavorable publicity.” The article concluded, somewhat ruefully, “All this should tell voters that — legally — it’s pretty much up to them to sort out who’s lying and who’s not in a political campaign.”

‘Truth is the Underdog’

If it’s up to the voter to figure out who is lying, then both the electorate and the news reporters they rely on may be spending an awful lot of time in 2012 sorting through the mess. For those hoping that substantive issues will get a fair hearing, this is more bad news. Attack ads are already much covered by news; now they threaten to swallow up increasing portions of the news hole. Reporting on attack ad controversies is cheaper and easier than producing original stories, or attempting to interview recalcitrant candidates. With many mainstream news outlets already weakened by a failing old revenue model and an invasion of partisan reporting masquerading as news, can we expect coverage of attack ads to crowd out issue reporting?

“I advocate class warfare as journalism,” said Bob Calo, senior lecturer at the UC Berkeley Graduate School of Journalism, with his tongue only partly in his cheek. “Journalists are no longer trusted by the public, who think we are just part of the propaganda game. We should be helping the public differentiate between propaganda and facts.” Calo, who produced magazine shows at ABC and NBC before joining the Berkeley faculty, said, “A reasonable risk would be to declare your loyalty to the underserved middle class. That means the politicians are your adversary.”

He takes the threat of attack ads seriously, if no less acerbically. “Journalists are smart, but the problem is, you are going up against even smarter people who work in public relations. Truth is the underdog in American political speech.”

This is where public media, and the tsunami of public engagement, might come to the rescue. A second article in this series will look at these forces in the 2012 election. Watch this space for more.

Evelyn Messinger, president of Internews Interactive, is a television and Internet producer, and a pioneer of citizen engagement projects that define the parameters of digital connectivity. Her credits include daily news, features and documentary programs for the BBC, Link TV, PBS, PTV stations, CNN and others. Ms. Messinger was the director of Electronic Media for the Soros Foundation, where she created the Foundation’s Electronic Media Program, and a founder and executive director of Internews Network, an international media NGO.