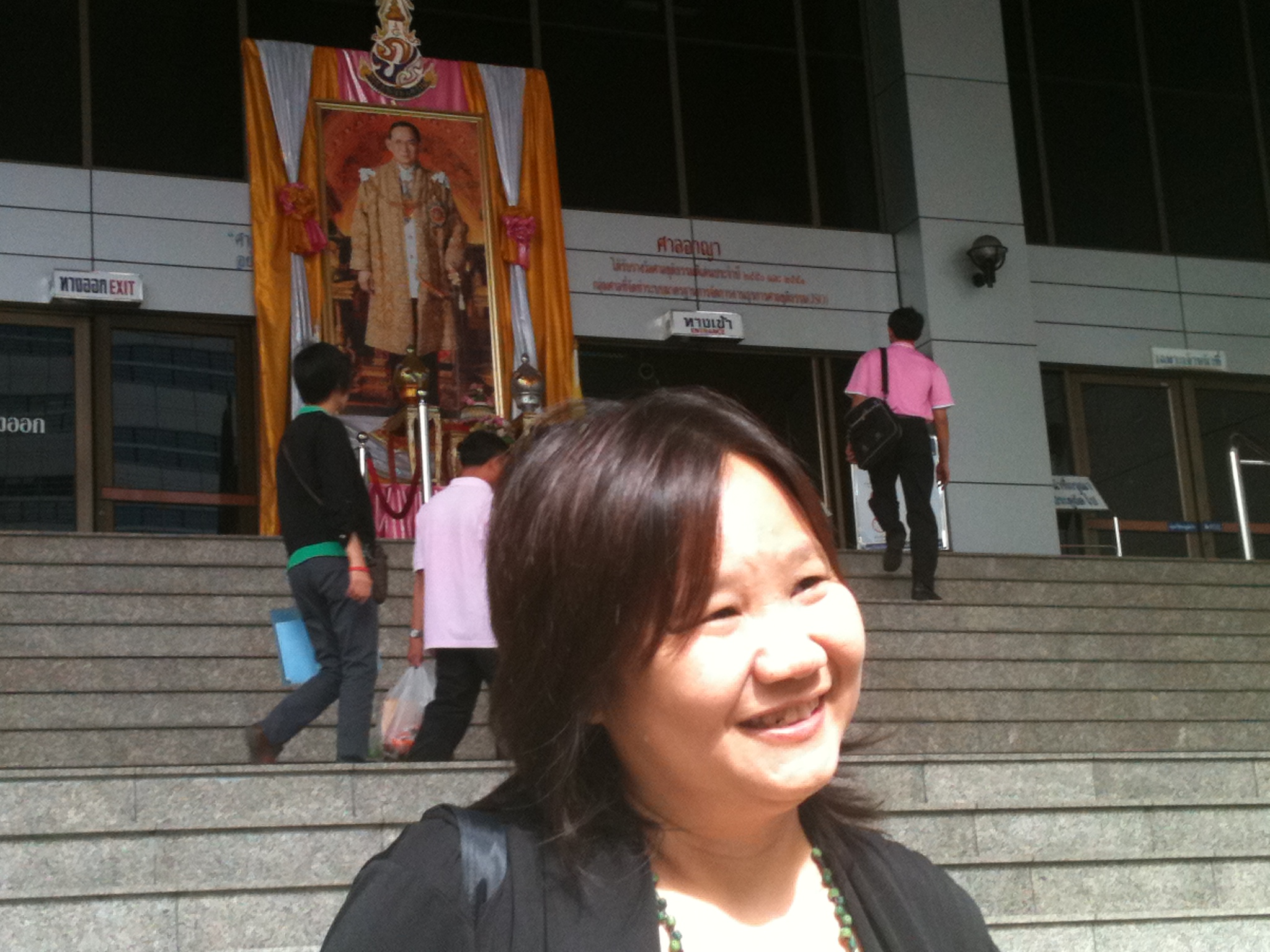 Chiranuch Premchaiporn pictured outside Bangkok's Criminal Court on Thursday morning Sept 1. In the background is a mural of Thailand's King, as commonly seen at official buildings in Thailand. (Photo: Simon Roughneen)

BANGKOK — As a high profile case against a prominent media campaigner returns to court in Bangkok, it has emerged that the long arm of Thailand’s lèse-majesté law has reached into California.

On Thursday Chiranuch Premchaiporn of the Thai current affairs website Prachatai returned to court in the Thai capital to face vague-sounding allegations that she facilitated third-party remarks about Thailand’s royalty. Meanwhile Anthony Chai, a Thai-born U.S. citizen, is suing U.S./Canadian web domain host Netfirms for $75,000 in damages, alleging that the company handed his personal information to Thai officials without his consent.

Defaming the [Thai] King is often deemed a threat to the country's national security."

lèse-majesté laws and how they work

Thailand’s lèse-majesté laws incriminate anyone who “defames, insults or threatens the king, the queen, the heir to the throne or the Regent,” with those found guilty facing jail sentences of 3-15 years, and sometimes longer. Defaming the King is often deemed a threat to the country’s national security.

Prior to 2005, while living in Long Beach, California, Anthony Chai says he posted anonymous comments critical of the laws on a now-defunct website, a forum for expatriate Thais to discuss their country’s fractious politics. Chai is not the only U.S. citizen to fall afoul of Thailand’s lèse-majesté restrictions, with 54-year-old Joe Gordon, another naturalized American originally from Thailand, charged on August 20 with a variety of offenses, including insulting Thailand’s King.

Thailand has been beset by color-coded political protests in recent years, with royalist “yellowshirts” demonstrating in 2006 and 2008 against governments they saw as a threat to the country’s constitutional monarchy. Last year, “redshirt” protestors, some of whom vented acerbic anti-monarchy slogans, took to the streets of Bangkok in protest at what they deemed an illegitimate government backed by the some of the same yellowshirts who helped oust redshirt-aligned administrations in 2006 and 2008. The 2010 protests turned violent, with the Thai Army accused by human rights groups of killing dozens of redshirts, who were in turn alleged to have sheltered armed militants within their ranks.

In elections on July 3, 2011, the redshirt-linked “Puea Thai” (For Thais) party won, prompting speculation that amendments to the lèse-majesté laws could follow. However, it should be noted that the case against Chai was undertaken during a previous redshirt-linked government, and the new administration has vowed to maintain the crackdown on alleged insults to the country’s monarchy, perhaps to pre-empt politically-incendiary royalist criticisms that Puea Thai is an anti-monarchy party.

Criticizing the law, not the king

Criticising the lèse-majesté laws — as Chai claims he did — is not in itself illegal, and some high-ranking Thai politicians have made noises about re-assessing the prohibitions, or at least attempting to rein in what some regard as overuse and misuse of the law, which allows any Thai to file a lèse-majesté complaint against someone else, thereby triggering a police investigation.

David Streckfuss, author of Truth on Trial in Thailand, told MediaShift that “Thai royalists argue that the Thai monarchy is unique and so deserves unique punishment. But critics claim the law is used arbitrarily as a weapon to silence critics, and undermines democracy in Thailand.”

Whatever Chai posted, Thailand’s cyber-watchdogs noticed and got in touch with Netfirms, the company that hosted Manasuya, which means “human” in Thai. Lawyer for the accused Mary Christine Sungaila told MediaShift that “Netfirms wrongfully revealed Mr. Chai’s identifying information to a government that was aggressively pursuing prosecutions under its lèse-majesté laws — laws that themselves were increasingly coming under fire by the UN and other human rights bodies, groups and instruments.”

Thailand and the U.S. share a bilateral “Treaty on Mutual Assistance on Criminal Matters” — but the complaint says that Chai’s information — his IP and email addresses — were disclosed to the Thai officials without recourse to the proper subpoena procedures. Netfirms had not responded to questions from PBS Mediashift at time of writing.

Chai says he was interrogated twice in 2006 by Police Colonel Yanophon Youngyuen, Deputy Director-General of Thailand’s Department of Special Investigations, the country’s equivalent to the FBI. He was first questioned during his last visit to his homeland, and later at Los Angeles International Airport, when Yanophon was on a stopover during a flight from Washington, D.C. to Bangkok, after attending a police training course in the U.S. capital. Yanophon is due to speak at a high-profile cybersecurity forum in Singapore on November 22-23, alongside representatives from the U.S. military, UK and Dutch Defence Ministries and others .

In the meantime, Chai says that he cannot return to his homeland — where hundreds have been jailed for allegedly insulting the country’s royals — as he faces arrest. Exact numbers of those charged and jailed on lèse-majesté charges are unavailable, however, though Thailand’s National Human Rights Commission says it is trying to collate the numbers from various government departments. According to statistics compiled by David Streckfuss, 242 lèse-majesté allegations have been made to police since 2008. However these numbers do not tally with court records, making it very difficult to quantify exactly how many people have been charged.

Thailand’s lèse-majesté laws are likely the most stringent anywhere in the world, and despite King Bhumibol Adulyadej previously saying that he is not above criticism, Thailand’s politically fraught recent history includes a rise in lèse-majesté charges from a handful to hundreds each year.

One of the those facing a lengthy jail term is Chiranuch Premchaiporn, and hers is arguably the highest-profile trial in Thailand’s growing clampdown on alleged slurs against the country’s monarchy. She is not accused of saying anything herself, however, but of failing to quickly-enough remove 10 comments made by anonymous posters which allegedly insulted the King. According to the state prosecutors, she has broken another intimidating-sounding Thai law, the Computer-Related Crimes Act, which makes it an offense to post comments online that are deemed offensive to the monarchy.

After a six month hiatus, hearings resumed in Chiranuch’s case, in Bangkok this week. I attended, listening to testimony from police officers involved in the investigation against Chiranuch, who like most Thais goes by a nickname, shortened to “Jiew.”

Speaking to MediaShift after the morning hearings, she said that the restarted proceedings seemed to be moving faster than during the previous court sitting held in February, and that she remains “hopeful for a positive outcome.” Some of that optimism may stem from the notably-assertive judge now overseeing the case, who said in court on Thursday that the accused “is not at fault.” However hearings are scheduled to run into October, as things stand, with the witnesses for the accused not due to take the stand until next month.