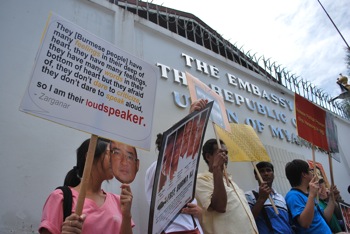 Protestors outside the Burmese embassy in Bangkok on Friday. The mask depicts Zarganar, a popular comedian and social commentator jailed for criticizing the Burmese government response to a May 2008 cyclone, which killed more than 140,000 people. Photo by Simon Roughneen.

BANGKOK — A handful of protestors gathered outside the Burmese embassy in Bangkok last Friday to vent their anger against the detention of 17 journalists in Burma, some of whom have been given multiple-decade jail terms for what activists describe as “no more than doing their jobs.”

The jailed reporters worked for Democratic Voice of Burma, a Burmese media organization with personnel in Norway and Thailand. Decades of military rule in Burma incorporates vice-like press controls, and though these have been loosened of late, there are questions over whether this apparent liberalization is anything more than rhetorical.

Former political prisoner Nyi Nyi Aung, now in the United States, said failure to release the detainees shows the insincerity of the Burmese rulers. "They don't want to make any reform in Burma," he said.

Those questions are highlighted by the case of Hla Hla Win, a 27-year-old DVB reporter sentenced to 27 years in jail for breaching motorbike rules and shooting video. DVB Chief Editor Aye Chaing Naing said, “There is no legal justification to arrest Hla Hla Win, and she should not have been arrested in the first place.”

Talk, but no walk on reform

Hla Hla Win and the 16 other DVB reporters are among what the Assistance Association for Political Prisoners — a Thailand-based organization staffed by ex-political prisoners from Burma — calculates to be 1,995 political prisoners or prisoners of conscience still in jail in Burma. The Burmese government claims all the country’s incarcerated are criminals, including the hundreds of Buddhist monks rounded up after the 2007 Saffron uprising against military rule. The continued detention of almost 2,000 political prisoners highlights what activists believe to be a sham transition from military rule to democracy. Former political prisoner Nyi Nyi Aung, now in the United States, told me that the failure to release the detainees shows the insincerity of the Burmese rulers. “They don’t want to make any reform in Burma,” he said.

Burma held elections in November 2010, the first since 1990, though the result was a predictable landslide for the army-backed Union Solidarity and Development Party (USDP). When the post-election government was formed, ex-army men made up 26 of the 30 government ministers. Journalists have been given controlled-environment access to the recently convened Parliament, but on the condition that they avoid reporting in a manner damaging to the “dignity of the Parliament and the State.”

In another apparent loosening of the press control spigot, an article by opposition leader Aung San Suu Kyi, recounting her recent trip to Bagan — a temple-laden city in north-central Burma — was allowed to be published in a Burmese journal called “The People’s Era.” As ever, there was a caveat. It went to press only after much of the Nobel Peace laureate’s submitted content was chopped by the Press Scrutiny and Registration Division (PSRD), the official name for the state censor.

Unlike some other authoritarian states, Burma has a thriving private-run media and, according to one of a cache of recently leaked U.S. diplomatic cables sent from the country’s Rangoon embassy, “the number of weekly newspapers has gone from just a handful 10 years ago to approximately 150 today.” That said, most of the growth is in non-controversial areas “like sports and entertainment,” lacking what the cable terms “hard news about events in Burma or the outside world.”

Covering Suu Kyi has long been a tricky topic for Burmese publications, with the journal Messenger banned from publishing its supplement section for a week by the PSRD. Shiwei Yei is the Southeast Asia point-man for the International Federation for Human Rights. He told me that this is likely to be “related to the journal’s recent interview of Suu Kyi and the front-page photo of her.”

While bread-and-circus stories about soap operas and sports can, for the most part, now be run without prior vetting by the censors, political stories are subject to word-by-word examination, meaning that critical or investigative coverage of the country’s government cannot be undertaken.

According to U.S. embassy officials, writing in a cable sent before Burma’s 2010 elections, the censor bans “20-25 percent of all stories in a given periodical.” Burma’s poorly paid reporters have a pocket incentive to keep within the censor’s limits.

“Because Burmese reporters tend to get paid only for the stories that make it into the newspaper, self-censorship is prevalent,” according to the same cable. As for the new media regime, some say it merely “encourages more self-censorship as publishers become less certain of what content is acceptable to the authorities,” as Amy Sim of London-based Article 19 told me.

Still, the Burmese government is talking the talk on reform. An April 2011 parliamentary speech by President Thein Sein, describing media as the “fourth pillar” of Burmese society, was followed by other apparent liberalizations such as the watering-down — for now at least — of clumsy propaganda against foreign media by the much-lampooned New Light of Myanmar. In the past, this Burmese government mouthpiece panned DVB, along with BBC and VOA, with thick-tongued insults such as “killer broadcasts designed to cause troubles.”

However, the new president — who was an army general and prime minister under the pre-election military dictatorship — tempered his fourth estate spin by giving Burma’s MPs the enigmatic yet ominous-sounding missive that they were “required through media to inform the people about what they should know.”

A new fish-in-the-barrel target for satirists might be the Burmese information czar, Kyaw Hsan, who followed up a much-derided tearful breakdown at a recent government press conference — itself a novelty in Burma — by describing media as “red ants” in a parliamentary debate on Sept. 7, held in Burma’s purpose-built but isolated administrative capital Naypyidaw. To some, Kyaw Hsan’s speech means little more than the same old restrictions garnished with some unintentionally entertaining rhetoric. “He thinks that the country is not ready for press freedom,” said Zin Linn, of the Thailand-based Burma Media Association.

In his eyebrow-raising and quixotic response to a much-needed and overdue parliamentary proposal on press freedom, the minister of information said it would bring “more disadvantages than advantages,” before launching into a half-hour speech which quoted from the ancient “550 Jataka Tales” and its fable of the elephant king Saddan. In the tale, the king offered flowers (press freedom) to his queen, but the flowers attracted red ants (journalists), which bit the queen.