A Journalist’s Primer to Google+ 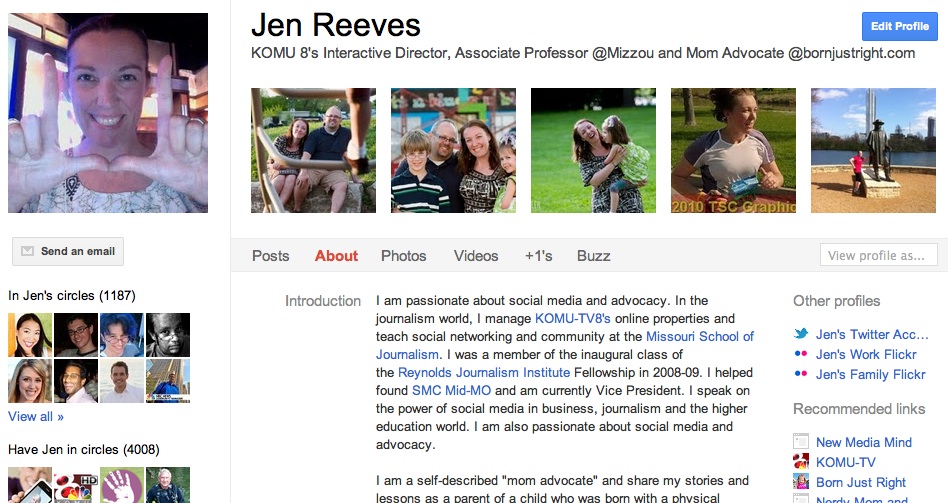 After a few months of chatter, Google+ has opened up to everyone.

As a journalist, Google+ is something you need to explore. Its simplicity of broadcasting your message is worth understanding and using to connect with news consumers.

As a journalist, Google+ is something you need to explore. Its simplicity of broadcasting your message is worth understanding and using to connect with news consumers."

I jumped into the new social space within 24 hours of its release. I’m an early adopter, and I love to share what I learn when I play in new spaces. My last three months of experience will help you jump in even faster.

But first, to understand Google+, you must get back to the basics of social media.

When you post to Twitter, everyone sees it. It isn’t creepy once you understand how Twitter allows you to broadcast in simple, 140-character messages. Anyone can read it, and hopefully, the readers will engage with you after you post something. A person who follows you on Twitter presumably wants to read your content every time you post. You don’t have to follow that person if you don’t want to read his or her posts.

A lot of things have recently changed in the ways you can post to Facebook, but let’s keep it simple. Consider a basic Facebook profile. When you post, you post to your friends. These are people with whom you’ve mutually agreed to share messages. It’s usually a more trusted relationship than you would find, at least initially, inside Twitter.

Think about peanut butter and chocolate coming together. Google+ is a peanut butter cup. It brings the best of both worlds and lets you broadcast your message to a wide, public audience or a smaller audience. Google+ will let you just talk to one person if you want.

Before you join, add a profile

Before you jump in, I highly recommend you build the heck out of your Google profile. If you decide to add people into your circles who you do not know personally, it makes sense to have a built-out profile. (I recommend you do the same with Twitter.) The great thing about a Google profile is you have the ability to share a really thought-out biography. To me, it feels a lot like LinkedIn, except you also get to share more photos of yourself. Building a profile on Google can be done before you sign up for G+. All you have to do is create an account on Google — with a Gmail address or connected to an email you already use.

Once you have an established Google profile, it’s time to head over to Google+. When you sign up, Google+ asks you to go through your contacts to pick out at least 10 people who are already members of Google+. I highly recommend you pick people who are engaged and focused on different topics to show you the many different ways you can post to Google+.

You will be able to read posts from anyone you circle who posts to the public setting or when he or she adds you to a circle they pick to share. There have been complaints that G+ is an isolated and lonely place … I have never felt that way. I see incredible, engaging conversations and content because I took a risk here and there and added people I didn’t know into my circles.

How is it possible one person has a bad experience in Google+ when another has a fabulous one? I think it’s because Google+ is what you make of it. The circles function gives you and the people you circle the opportunity to choose whether or not to engage. You could use Google+ as another email system where you only post directly to people (kind of like a DM in Twitter). I choose to publish publicly more often than not, mainly because I’m fascinated by the different people who have circled me and want to comment about the thoughts and information I share. The scope of Google+ can be within just the circles of the people you know or way beyond to new people and places around the world. I have never had the opportunity to gain that feeling in Facebook until it opened the new subscribe function last week. (If anyone reading this was a part of Twitter when it was young, you’ll remember thinking things were kind of boring there for a while as well.)

As a journalist, you need to use Google+ on a personal level before it makes sense as a professional. After it made sense to me, I started to search for as many people I possibly could from my market. I started creating circles based on a person’s location or even where they work if it’s a business that is regularly in the news. I have published specific questions to those circles to see what they want more from my newsroom along with news development in our area. I currently have 55 circles based on my personal and work interests and various regional identifiers that help me stay in touch with my news market.

Along with publishing, you can track your G+ stream based on each classification of circles. Along the left side of your G+ stream (or home page), you can click on each circle and read the posts of the people you’ve placed in that circle. It’s like reading through a Twitter list you’ve set up (or the new Facebook lists that launched in the past week).

There are all kinds of plug-ins and extensions you can add to enhance your Google+ experience, but I recommend keeping it simple at first. Once you really get into the swing of G+, you’ll notice you can’t stop returning to see new posts. You’ll also notice the little red box in the top right corner of your Google account. It’s always reminding me to check my G+. For some reason, I can’t just leave the red box with numbers alone. It entices me to continue checking the comments, posts and new circles I’ve been added into. If you don’t like a lot of email, I highly recommend checking your settings and changing the email notification functions. That will keep your inbox from exploding.

I can’t leave you without mentioning Google+ Hangouts. It’s one of my favorite features, and it’s actually become a part of my newsroom’s daily content in one of our newscasts. A “hangout” is an opportunity to conduct a video conversation with 10 different webcams. You can hop into a public hangout to see how it works just by clicking on the hangout button on the right-hand side of your home page and seeing if there are any open hangouts. Or you can launch one of your own. When you launch a hangout, it is just like posting an item to G+ — you can pick how many people can see if you are hanging out. A public hangout could include anyone from around the world. Or you can create a hangout that includes just family members.

The hangout uses Cisco technology that is seen in expensive Telepresence suites. The big screen recognizes noise and switches the camera based on who is the loudest. A conversation with many people is suddenly naturally bouncing back and forth between those who are in the conversation. It’s fun and a really great way to gather new perspective. KOMU 8’s interactive anchor Sarah Hill found a number of people in Oslo, Norway the day of the bombings and interviewed them about the experience using a hangout. She also leads a live hangout “cyber couch” during our new 4 p.m. interactive show where we schedule a wide array of people to discuss and participate in our hour-long newscast. I know of a grad student who used a hangout to get all of his committee members together to sign off on his thesis proposal. The opportunities for professional and personal use of a hangout are limitless.

I say this to almost every group I speak to about the use of social media as a professional. You have to play to understand how it works. Not only do you need to play, you need an open mind to see the many great opportunities inside a social media tool. The power of Google+ is how it is becoming an outer wrapper around the many existing Google tools we already use. Google+ isn’t a Facebook killer. Google+ is a new and productive tool journalists should understand.

Jen Lee Reeves worked in television news for the majority of her career. In the last six years, she has moved from traditional journalist to non-traditional thinker about journalism and education. Jen is currently the Interactive Director at KOMU-TV and komu.com. At the same time, she is an associate professor at the Missouri School of Journalism and was a part of the inaugural class of Reynolds Journalism Institute fellows (2008-09).