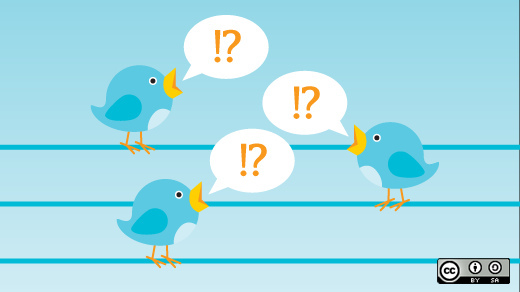 Over the past year, I have noticed an emerging student press trend sweeping the Twitterverse: the tweet greet.

An increasing number of student journalists appear to be using Twitter as the prime spot to seek sources for their story or class assignments and to make first contact with these sources.

Are these types of public, quick-hit requests a positive for the campus press...or is it a devolution of the journalist-source relationship?"

Due to their brevity, tweet greets tend to contain the same four characteristics: 1) A very, very quick note of welcome (“Hi”); 2) an extremely abbreviated identifier (“I’m a journalism student.”); 3) an uber-short explanation for the tweet (“I’m working on a story”); and 4) a request for an interview (“Up for a chat?”).

Of course, these are the basic attributes involved in an interview request made in almost any form, including in person, at the start of a cold call, and within an out-of-the-blue email. They just happen very rapidly once whittled into single tweets, often lacking context (students with job titles and outlet affiliations become just “a student journalist”), a polite easing-in or even proper spelling (“Im a j-student plz hlp”).

The oddest part about these interview entreaties: They are public. Ignoring or unable to use the private “direct message” option, the requests are simply left in raw form for the tweeting masses to read. Of course, the nature of Twitter and the wider web is transparency, but there is still something slightly disconcerting about seeing how many people a reporter has asked for a chat using the same exact greeting.

Are these types of public, quick-hit requests a positive for the campus press — enabling students to show initiative and innovation in reaching out to lots of sources who they might otherwise not have a shot at interviewing? Or is it a devolution of the journalist-source relationship? Simply put, is there an element of rudeness embedded within these opening tweets?

1) This request reeks of laziness. You really could not spare one minute to check my Twitter profile, click on the link to my blog, and find my email address?

2) Who are you? Your tweet does not reveal it. Your Twitter profile is vague. Am I now supposed to do the work to ferret out your identity?

3) What’s next? You asked me if I wanted to chat, but left me no options on how I should respond. Should I reply to your tweet publicly to say I’m game and give you further instructions on how to contact me?

4) The human part of me cannot help but feel a little violated. I’m a person, not a Twitter profile! If I’m that valuable to you, take the time to do more than send a vague opener that took you five seconds to type and that you just sent to a dozen other people.

In the end, if the tweet greet has truly implanted itself into college media 2.0, there should at least be some guidelines for its use. Here are my top 10 rules of etiquette.

2) Do some reconnaissance work first. If you’re going the tweet intro route, take a moment to actually look at a person’s Twitter page. How many users does the person have? How many tweets has she posted? When was the last post? Also, search the mass public feed for the user’s Twitter name. How many people communicate directly with her? How often does she engage in back-and-forths with people publicly? These will all be indicators of how worthwhile or fruitless a tweet greet will be.

If the person is Ms. Twitter, living life out loud 140 characters at a time, then, yes, a tweeted interview request might make sense. If you’ve stumbled onto an LT (light tweeter) or an ANET (almost non-existent tweeter), it’s probably best to go old school (by 2011 standards) and send an email.

3) Be forthcoming. At the very least, within your request tweet, include the reason you are writing. The most maddening tweets of this type read simply, “Hi, I’m a student journalist working on a story. Can I interview you real quick? Thnx.” Even if it takes two or three follow-up tweets, you must attempt to even marginally answer the two questions every interviewee asks when contacted by the press: Why me? And what for?

4) Be professional. Spell everything correctly. Use proper grammar. Avoid even the most common acronyms or text-speak (i.e., u wanna tlk @ 6 tnite?). Use titles (Mrs. Weasley, Professor Bieber), not first names.

5) Include an email address. Don’t force people to respond to you publicly or on a platform they might not be able to sufficiently access on their mobile phones.

6) Embed a bio. After your basic request, always send an extra tweet that includes a link to your outlet’s homepage and one that provides a quick-hit overview of you (such as your blog’s About Me page). Since you’re not doing the job with your introduction, it’s essential that you make it incredibly easy for the potential interviewee to find out more about you.

7) Use some crowdsourcing tact. If you send out a bevy of carbon copy public interview requests all at once, it will be hard for anyone but the glory-hogs to feel like they’re pivotal to your project and that you are worth their time.

8) Be aware of what your tweets say about you. Step 1) You tweet an interview request to a stranger. Step 2) The stranger clicks on your Twitter profile and scans your recent tweets. If these tweets are lame, vulgar or mostly personal — or if you barely have any tweets at all — your interview hopes will probably be dashed. #fml

10) Keep your Twitter feed public! If you hide your tweets, your credibility has the shelf life of a person’s mouse clicking on your profile name.

This last bit of rule breaking once happened to me. A person tweeted me for an interview about students and new media, I believe for a master’s thesis. Intrigued, I clicked on the guy’s profile. It proclaimed, “This person has protected their tweets.” My initial thoughts: 1) That’s the way to be! Make it TOUGHER for me to find out who the heck you are. 2) You’re writing about new media? And 3) Are you secretly a superhero?

One response to “Twitter Interview Requests: #Innovative or #Epicfail?”