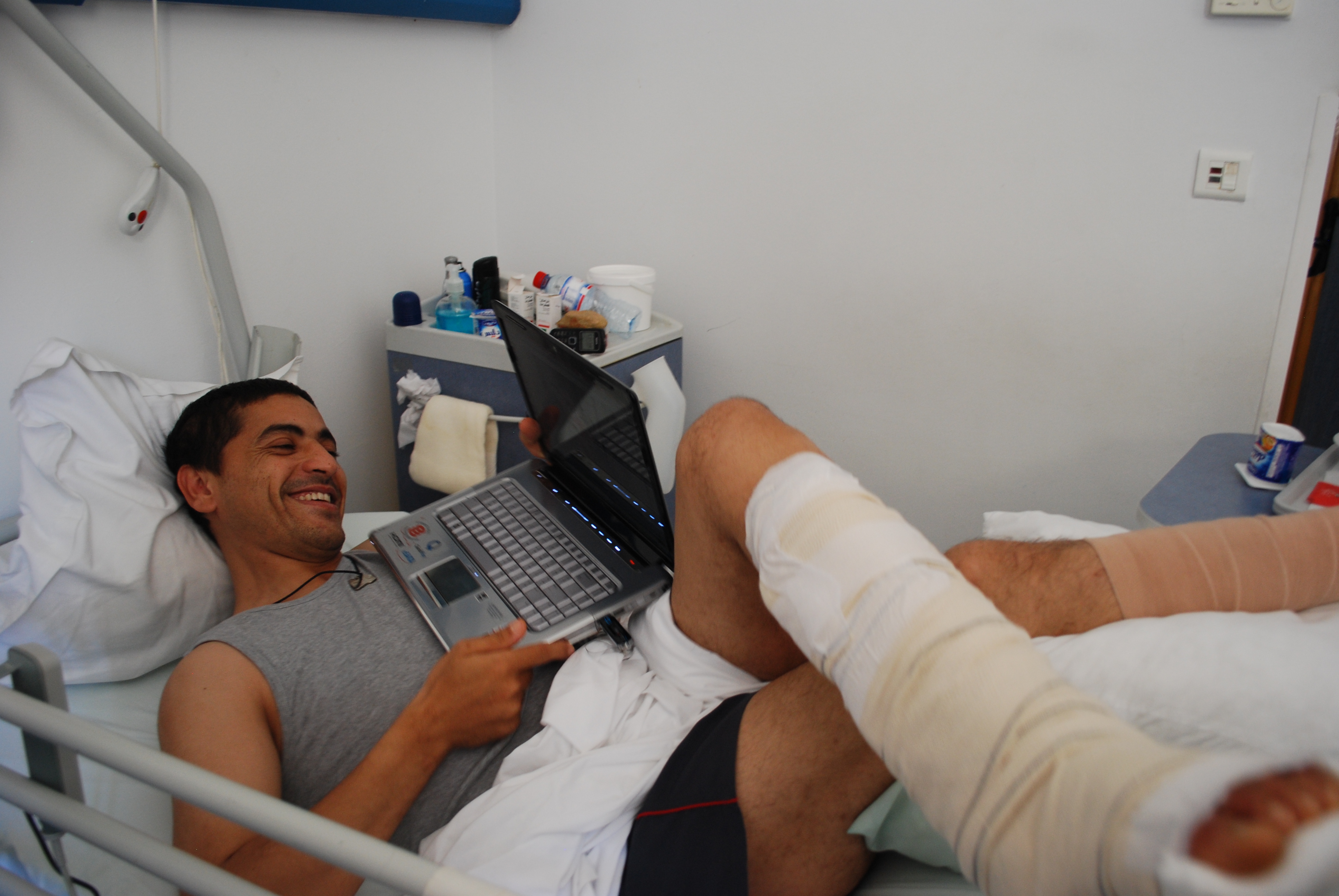 29-year-old Libyan rebel leader Hassan Sadek connects with the battles going on without him from his hospital bed. All photos by Michelle May.

Hassan Sadek, a 29-year-old Libyan engineer turned rebel group leader, lies in his Tunis, Tunisia, hospital bed, straining his eyes and neck to view the laptop resting on his chest. Occasionally he stops, clenching his teeth, contorting his face in pain, as he lifts one of his two casted legs for relief. He muffles his cries of discomfort and sometimes refuses to take pain medication.

Hassan’s 32-year-old brother greets us and hands Hassan a USB drive. Hassan motions for another visitor to draw the curtains. He turns his laptop so the rest of us can see what the USB drive contains: video of a thin man hoisting a rocket-propelled grenade (RPG) launcher onto his shoulder, firing it with a boom, then re-emerging from a cloud of smoke, running for cover behind a building.

“My group, this morning.” Hassan nods at me proudly. Hassan and other rebels have been fighting for months now, attempting to overthrow leader Moammar Gadhafi.

A rare quiet moment at the neighborhood cafe where friends and family go to download videos from the front lines.

Although there’s no Internet connection in the Tunis hospital where Hassan and dozens of other Misratans are recovering from life-threatening injuries, he and his fellow Libyans find other ways to stay informed with the latest news from the front line. Visitors and family members regularly head to the nearest coffee shop — a sleek, modern outdoor cafe with WiFi — where they download videos uploaded just minutes earlier in Misrata. When they return to the hospital, they go room to room with the videos on a USB drive so those who want to download them onto their personal laptops, can.

The sounds of heated but jovial conversation and gunfire blasting out of laptop speakers often echo through the hallway in Hassan’s wing of hospital. Although the former rebel group leader was put out of commission after he was shot several times by Moammar Gadhafi’s snipers during a battle on Tripoli Street, he has now become a de facto leader in the hospital. When something big happens back in Misrata, his room becomes the meeting point for discussion. One day it was news of another death in his group.

Frustrated, he turned toward me, saying, “Tomorrow I go back to Misrata. I need to protect my family, my group, and my city.”

connecting to the front line

There is no doubt that Hassan is a hero, but his two casted legs prevent him from going anywhere.

He shares a room with a 27-year-old Libyan man who is unable to speak or move after shrapnel was lodged in his brain during a street battle. He will undergo surgery soon. The patient’s brother, Dr. Ali Elsalhi, a 32-year-old oral surgeon, has accompanied his brother to Tunis after having spent two months caring for him at a hospital in Cairo. Between feeding, washing, and overseeing his brother’s medical needs Dr. Elsalhi tries to convince Hassan that he is still too injured to return to Misrata. But Hassan doesn’t listen. He claims he can shoot guns and RPGs while laying down. Dr. Elsalhi smiles at the welcome comic relief.

Someone lends Dr. Elsalhi a USB device to connect to the Internet for the next 30 minutes. He doesn’t have his own device to access it since such gadgets are relatively expensive in Tunisia. Instead, the devices are shared among many of the Libyans in hospital. Once online, Dr. Elsalhi is chatting with friends outside of Misrata on Facebook and Skype — his rare opportunity to experience relative normalcy.

A group of injured fighters gather for a moment at the cafe.

“Look look look.” Hassan grabs my attention and points at his computer screen. He shows me a video of the exact moment he was shot by snipers on Tripoli street in Misrata. Noticing my surprise, Dr. Elsalhi pauses from chatting to explain that everyone in Misrata is fighting in some way: some cook, others offer medical care, some film every single battle, and others continuously upload the videos to the Internet using a two-way satellite connection.

But I can’t help but wonder if having access to such up-to-the-minute information is torturing, more than helping, Hassan.

Working around severed lines of information

Once Dr. Elsalhi’s half-hour online is up, we go to the nearby cafe for coffee. He brings his laptop, hoping to reach his family, who occasionally has access to Skype. The Gadhafi government cut phone lines and Internet in Misrata months ago. Some Misratans have gotten around this by expensive two-way satellite phones and Internet connections, which are reportedly not always reliable. Although there was recent buzz on Twitter that phone lines were once again working in Misrata, Dr. Elsalhi still hasn’t had success reaching his family by phone. But he doesn’t seem too disappointed. By now, he has a system for getting around the technological challenges of communicating with Misrata.

The next day, Dr. Elsalhi is distressed. The night before, while watching a battle on YouTube, he recognized his other brother, one who is still fighting in Misrata, on the screen. He then watched as his brother collapsed. Twelve hours later, Dr. Elsalhi was finally able to connect with a family member in Misrata on Skype. They reported that, thankfully, only his brother’s arm was injured. They made a plan: His brother was to have surgery in Misrata and then make the 20-hour boat ride to Tunisia to reunite with his brothers, and receive better medical care in Tunis.

The boat that would bring Dr. Elsalhi’s brother to Tunisia is the same boat that Hassan would return to Misrata on. Hassan is finally is getting his wish. Even though he still can’t walk, he is able to get around in a wheelchair.

Although the front line has been pushed more than 32 kilometers out of Misrata, news of Gadhafi’s military regularly sending long-range missiles into the center of Misrata causes me concern for Hassan’s safety. But it’s useless to ask him not to go. He’s wanted to return to Misrata ever since he arrived in Tunisia.

“It’s been three months since I’ve seen my mother, my father, my sisters, my brothers, my group. I need to talk to them and help them,” he told me.

Unlike Dr. Esalhi’s family, Hassan’s does not have the technological know-how to occasionally access the Internet, so it’s no exaggeration when he says he hasn’t spoken to his mother in months.

But before Hassan leaves Tunisia, he opens a Facebook account to keep in touch with Dr. Elsalhi and me. There’s been no sign of Hassan on Facebook or email since he left, but his brother sent an email from a newly opened free Internet cafe to say they’ve safely returned to their beloved city.

Michelle May is a Madrid-based travel writer and educational psychologist. She is writing a memoir about her experiences in the Middle East. You can read her blog here: www.meshelmay.com