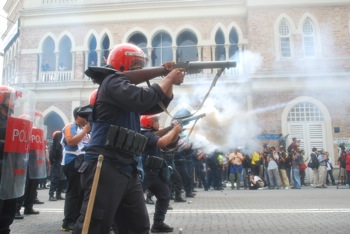 More than a week after Malaysian police fired teargas and water cannons at thousands of demonstrators seeking reform of the country’s electoral system, a Facebook petition calling on Prime Minister Najib Razak to quit has drawn over 200,000 backers, highlighting the role of social and new media in Malaysia’s restrictive free speech environment.

One contributor to the page wrote: “The world is full of multimedia and electronics; the things we so call camera and videocam … And photos and videos were already being uploaded on the Internet but ‘it’ still denies the truth and makes stories and lies until today.”

"I worked for more than 10 years in the traditional, government-controlled press. We knew what it was like to have constant government and corporate interference in the newsroom." -Jacqueline Surin

Social media such as Facebook and Twitter have played a major role in motivating some of the demonstrators in the run-up to the rally, which went ahead despite a police ban and lockdown imposed on sprawling Kuala Lumpur on the eve of the July 9 protest.

The demonstration organizer, Bersih 2.0 — a coalition of 63 NGOs (non-government organizations) that wants changes such as updated electoral rolls and a longer election campaign period — has its own Facebook page, attracting a similar number of “likes” as the page urging Najib to step down, with 190,000+ fans at the time of this posting.

The latest notable update is another petition, requesting 100,000 backers for a Bersih 3.0 — although organization head Ambiga Sreenavasan has said she does not foresee any similar protests in the immediate future.

Along with online news sites such as Malaysiakini and Free Malaysia Today, social networks have helped get around partisan coverage by newspapers close to the government, where accounts of the rally did not square with what I witnessed.

Coverage in Utusan, the pro-government Malay-language daily and best-selling print newspaper in Malaysia, was explicitly hostile to the protest and has remained so in the days since. Just this week, the paper came out with an editorial claiming that Jewish groups would use the opposition to infiltrate the Muslim country. The day after the rally, the front page of the English-language New Straits Times (NST) showed a single protestor, face covered with a scarf, looking set to hurl something at someone or something, minus the surrounding street scene.

The photo was headlined “Peaceful?” and was devoid of context, the implication being that Kuala Lumpur was beset by thousands of other would-be anarchists on July 9 and the police acted with heroic restraint in the face of relentless provocation. The NST is linked to Malaysia’s main governing party, the United Malays National Organization (UMNO), which has ruled uninterrupted since independence in 1957.

As observed at several locations around the city center, the protest was peaceful, multi-ethnic (Malaysia’s demographic breakdown is two-thirds ethnic Malays, a quarter ethnic Chinese, and the remainder mainly Indian/Tamil), though it was impossible to know how many in the gathering were affiliated with the country’s opposition political parties versus how many were ordinary, disgruntled Malaysians who were galvanized into action by Bersih’s exhortations.

With police roadblocks and checks emptying the usually bustling city by Friday evening, the only other people on the streets on Saturday morning — before the demonstrators’ emergence — were expectant journalists and lost-looking tourists. When the protestors came onto the streets, the police wasted little time in firing teargas into the crowds gathering at various locations in an attempt to march to the Merdeka Stadium, where the country declared its independence from Great Britain.

Despite allegations of police aiming tear gas or water cannons directly at protestors or at a hospital in the city, print newspapers praised the police response, as did the government. That, in turn, has drawn criticism from Malaysia’s online news sites.

However, even if individual journalists or publications wanted to take an objective line with this story, Malaysia’s press laws act as an effective deterrent.

Self-censorship is prevalent, said Siew Eng of the Centre for Independent Journalism, who added that “print coverage of the organizers [of the Bersih 2.0 rally] has been demonizing them for weeks now.”

The main deterrent seems to be the country’s 1984 Printing Presses and Publications Act (PPPA), which means that publishers and printing firms need an annual operations permit, with the added stipulation that the prime minister can revoke licenses at any time without judicial review.

Jacqueline Surin is editor of The Nut Graph, one of the online alternatives to the older print news establishments in Malaysia. Getting out from under the government’s thumb was a prime motivation for her.

“I worked for more than 10 years in the traditional, government-controlled press. We knew what it was like to have constant government and corporate interference in the newsroom,” she said.

Article 10 of Malaysia’s constitution upholds freedom of expression, but in effect this right is curtailed by a range of antiquated and Orwellian-sounding laws. The colonial-hangover Sedition Act, the Internal Security Act (ISA) and emergency laws are used regularly to impose restrictions on the press and other critics. One well-known case is that of Raja Petra Kamaruddin, founder of the website Malaysia Today. After allegedly insulting Islam, the majority religion in Malaysia, he was charged under the 1948 Sedition Act, and was accused of defamation, in a case seen as politically motivated.

According to the Economist Intelligence Unit, there are 16.1 million Internet users in Malaysia, out of a population of 27 million. There is a sharp town-country divide, however, with 80 percent of the country’s web users being urban-based. That said, the Internet gives Malaysians some freedom of expression, away from the tight controls and implicit intimidation that hampers the older print media outlets. In the days since the Bersih 2.0 rally, many tweets and blogs from Malaysians have said trust in the country’s print media has declined, or is now non-existent.

Online media outlets unhindered by the PPPA have helped give Malaysians a fuller and more objective image of what went on July 9. “The police have said that only 6,000 people turned up for the Bersih 2.0 rally and that there was no police aggression,” according to Surin. “There are enough pictures and videos already out there, even before the traditional media could report them, that demonstrate that the police/state are clearly misrepresenting the truth.”

How long this will last remains to be seen. Siew Eng told me that “there are moves to amend the laws for the Internet and online media in Malaysia,” citing a recently established cross-ministry committee set up by the government to look into the issue.

Simon Roughneen is an Irish journalist usually based in southeast Asia. He writes for the Los Angeles Times, Asia Times, The Irrawaddy, ISN, South China Morning Post and others. He is a radio correspondent affiliated with Global Radio News and has reported for RTÉ, BBC, CBS, CBC Canada, Fox News, and Voice of America. He has worked in and reported from over 30 countries.