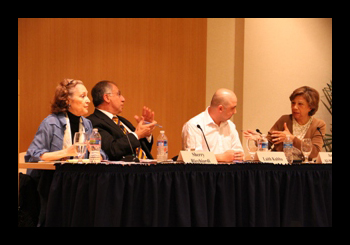 The panel of "Iraq's News Media After Saddam: Liberation, Repression, and Future Prospects," courtesy of the Center for International Media Assistance.

The U.S. government pumped an estimated half a billion dollars into revitalizing Iraq’s news media after Saddam Hussein was ousted in 2003. It was the first time in three decades that Iraqi citizens had access to a free press, but the current state of news media in the multiparty republic is not what some had hoped for, according to a new report.

"The reality on the ground today is a far cry from what Pentagon planners envisioned for Iraq's reconstituted press system." -Sherry Ricchiardi

They included moderator Laith Kubba, senior director for the Middle East and North Africa program at NED; Shameem Rassam, an expert on Iraqi media; and Ammar Al-Shahbander, program director at the Institute for War and Peace Reporting (IWPR). The report explores what kind of media will be left in the wake of the U.S. military and monetary withdrawal and provides a prognosis for Iraq’s nascent independent press.

“The reality on the ground today is a far cry from what Pentagon planners envisioned for Iraq’s reconstituted press system,” said report author Sherry Ricchiardi, a senior contributing writer for American Journalism Review, who specializes in international issues. “Many of Iraq’s media outlets have become mouthpieces for ethno-political factions with the potential to inflame sectarian divides that have led the country to the brink of civil war.”

Ricchiardi’s report says press freedom continues to be an issue in Iraq.

“While the Iraqi government boasted of freedom of the press and the variety of media outlets, the freedom of journalists to cover certain stories or have access to information remained severely restricted,” she noted. “Iraq’s new constitution, ratified in October 2005, provided a framework for the protection of basic human rights and free expression. However, criminal laws that were holdovers from Hussein’s era remained on the books along with some put in place by the Coalition Provisional Authority, such as Order 14 on ‘prohibited media activity,’ which has been used to shut down media.”

Hayder Hamzoz, an Iraqi in his early 20s who runs the blog Streets 4 Change, told Ricchiardi: “You can’t move around easily [in Iraq], because everybody knows you and everyone in Baghdad has a gun. They can stop your voice with one bullet, they can beat you and no one will care.”

Despite not meeting expectations, some things have changed for the better.

“Today in Iraq you might pay the price if you investigate, but you defiantly paid the price under Saddam’s regime. [Now] when a journalist shows his press badge in the Iraqi checkpoints, they are feared and respected for their work,” said Al-Shahbander, adding that even Prime Minister Nouri Almalki gets nervous when the press publishes something he considers negative.

The majority of Iraqi journalists Ricchiardi talked to for the report had one simple message: “Please don’t forget us.”