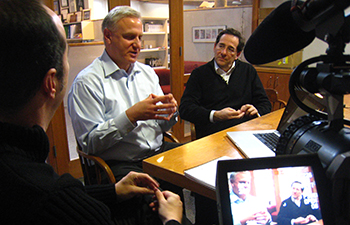 From the air-conditioned meeting rooms to the muggy poolside bar, everyone at this year’s Investigative Reporters and Editors conference was talking collaboration.

It seems that our once doggedly independent industry is beginning to embrace a lesson long forgotten from elementary school: how to play nicely with others. And that might be because there are few alternatives. With newsrooms across the country still reeling from the plummeting revenues of the last half-decade, many organizations have begun working together as a survival strategy — especially when it comes to the typically more costly and time-consuming endeavors of investigative reporting.

"A lot of people realize that to accomplish the kinds of quality work that they used to do on a more regular basis, they've got to look for partnerships." -Mark Katches

IRE’s four-day convention, which took place June 9 – 12 in Orlando, featured a good number of sessions focused specifically on collaboration, and the C-word trickled into many other panels that were supposed to be about other topics (global crime and corruption, working with students, etc.). IRE even unveiled a new award category for collaborations and partnerships this year. The inaugural winner of the new award, Dangers in the Dust, included 10 reporters in eight different countries investigating the global asbestos trade for the International Consortium of Investigative Journalists and the BBC.

One of the last panels of the weekend — which moderator Bill Buzenberg of the Center for Public Integrity called “Herding cats and other collaborative acts” — had project managers anticipating a lucrative future for collaboration. Mark Katches, editorial director at the Center for Investigative Reporting and California Watch, said the budget cutbacks have spurred a new “pragmatism” in American newsrooms.

“There used to be this arrogance, ‘We can do it better than anybody, we’re the only ones that can do it,’” said Katches, who formerly led investigative teams at the Orange County Register and the Milwaukee Journal Sentinel. “A lot of people realize that to accomplish the kinds of quality work that they used to do on a more regular basis, they’ve got to look for partnerships.”

I was surprised to find that even outside the confines of the conference rooms, reporters and editors were chattering about collaboration, planning new projects together or just venting about lingering resistance. An investigative reporter from a large daily newspaper told me that his editors are coming around to the idea. From his perch on a foam noodle halfway submerged in the resort pool, he said collaboration is really the only way to go.

Indeed, it seems that the tides really have turned.

But despite all the buzz, more questions than answers remain about collaboration — beginning with, how do we define it? Of course, depending on the story and personalities involved, each collaboration will be unique. And that’s a good thing. Still, what are the basic guidelines to doing this work? How do you keep all the partners happy while still producing good journalism?

Here at UC Berkeley’s Investigative Reporting Program we’ve undertaken a project to identify best practices for the new era of collaboration. We certainly have our work cut out us for us here. But at IRE, I did pick up some pointers.

GET IT IN WRITING (and get it early)

Despite a general enthusiasm for collaboration, there was no shortage of horror stories shared at IRE — though few were told in great detail. The feelings of being slighted, in many cases, stemmed from doing collaborations across platforms, where a print organization, for instance, was given inadequate attribution on a broadcast, or where TV producers were brought in too late and had to redo all the interviews on camera.

There were conflicts over breaching timing agreements and even disagreements about how logos would appear. These scenarios, the industry experts surmised, could be avoided with a written agreement that lays it all out, particularly one made early on in the partnership. The veterans of collaboration also recommend establishing a point person or manager of sorts to assign out all other various tasks — everything from filing FOIA (Freedom of Information Act) requests to fact-checking and legal review.

Just how explicit to get in these agreements, though, is a matter of debate. Stephen Engelberg, managing editor of ProPublica reflected, “The natural tendency for news people is toward informality. I know it’s my tendency.”

Engelberg said ProPublica’s contracts vary on a case-by-case basis, but tend to be on the less formal side. He added, though, “Every now and again, very well-meaning, sincere, honest people can misunderstand each other and having a few bullet points is not a bad thing.”

On the other hand, Gordon Witkin, managing editor at the Center for Public Integrity, cautioned against making assumptions, especially when working with a partner for the first time. “You go into a partnership and what’s obvious to you might not be obvious to someone else. You have to lay out your terms and conditions rather exactly.”

Besides lessons learned from the business world, there are also those that are more in the realm of couple’s therapy. In successful partnerships, communication is key. Even if you’ve already written down your agreement in the courtship phase, the project invariably will change, and open communication throughout is essential. Some panelists recommended weekly conference calls when working in long-distance relationships, but most prefer meeting face-to-face. The more trust and openness you can establish at the beginning, the smoother the release of the stories at the end.

“There’s a lot of hand-holding that has to go on; there are egos you have to pay attention to,” said T. Christian Miller of ProPublica. “That fragility comes out at the end unless you’ve really prepared yourself and built up that relationship to have that trust. If you try to manufacture that at the backend of the process, that’s when you’re inviting bad feelings and not wanting to do more collaborations.”

And the real secret to successful collaborations? Yep, it’s a little personal.

Brant Houston, a former IRE executive director and current professor of investigative reporting at the University of Illinois, put it this way: “One of the clichés that is coming up around collaborations now is that it’s not between organizations, it’s between people.”

At IRE, one of the more celebrated interpersonal relationships was that of Daniel Zwerdling (NPR) and Miller (ProPublica) on their joint reporting on traumatic brain injuries in the military. Zwerdling told me it’s worked out because they have chemistry — just like you’d want in a personal relationship. On a panel at IRE, Miller said his partnership with Zwerdling has been one of the best. And this is why: “It’s almost like [you’re] colleagues in the same newsroom. And that’s how you have to start to think of your partners if you’re going to have a smooth partnership.”

And don’t forget that your own personality matters, too — as does maintaining your reputation. McNelly Torres, associate director of the Florida Center for Investigative Reporting, said that playing nicely with others is increasingly important in a shrinking industry where our paths tend to cross more often than not. “Think about this for a minute: Our pool is getting smaller and smaller,” she said. “You don’t want to put yourself out there in a negative light because it’s going to come back and bite you in the ass.”

This all may seem obvious. But they are points worth belaboring because it’s dreadful when it all goes wrong.

After hearing some of the more disappointing stories about partners getting inadequate credit, an audience member, Kimberly King, walked up to the mic. King, who just took a job doing consumer and special investigations for KXAS (Dallas’ NBC affiliate), said she’s hoping to inspire a collaborative spirit in her new capacity.

“For us to survive as passionate investigative reporters,” she said “we’re going to have to start to work together to re-enlighten editors and higher-up people that this kind of work impacts the public.”

Leah Bartos recently completed a master’s degree from the Investigative Reporting
Program at UC Berkeley Graduate School of Journalism, where she spent her second
year reporting for “Post Mortem,” a collaborative project between PBS Frontline,
ProPublica and NPR. Previously, she reported for the New Orleans Publishing
Group, New Orleans CityBusiness, Santa Cruz Sentinel, and Metro Santa Cruz
newspapers. She is currently working on a Knight-funded project on collaborative
investigative journalism.