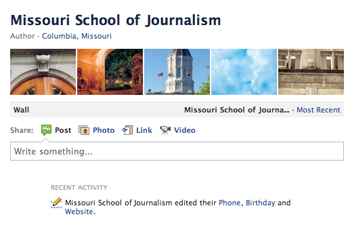 The Missouri School of Journalism has posted nothing on its Facebook page's Wall. Ever.

As students at the Missouri School of Journalism, we’ve learned about the importance of social media to the news industry.

But beyond the scope of journalism, we use social media every day just to communicate with each other. From perusing Spring Break pictures to keeping up with friends’ birthdays, Facebook and Twitter are constant companions for many college students.

For alumni and students looking to stay informed about what's going on at Mizzou's J-school, Facebook should be the first place we look."

So what happens when you have students who are also journalists? It would seemingly be twice as important that any organization attempting to target us would have a strong social media presence.

That’s not the case for some journalism schools, including Missouri’s J-school. Here is a sample of the number of Facebook “likes” for some of the top J-schools around the country:

The Missouri School of Journalism Facebook page has been up for several years, judging by the December 2008 timestamp below some of the photos it has posted. But yet, there is no content to speak of — even though it has more than 1,500 fans.

The only recent activity? “Missouri School of Journalism edited their Phone, Birthday and Website.”

A few photos have been published in the last couple years, but the J-school has not published any content on the wall. The only wall posts that exist are from other students or organizations asking questions or promoting an event.

A Range of Efforts

Columbia University has a similar problem. The last time the page put content on its own wall was July 2009. Before that, it was August 2008. This seems incredibly unusual for a school that has such a strong Twitter presence.

However, the page still sees a lot of discussion, with news organizations, students and professors posting every two to three days on average. They also have more than 1,100 Facebook “likes.” (Editor’s Note: Please see an UPDATE at the bottom of this story about Columbia’s Facebook efforts.)

A common theme between both schools is not only the lack of original content (or any content, for that matter), but the lack of a moderator to keep an eye on the discussion. On Columbia’s page there were several instances of spam, and on both there were prospective students whose questions about the J-school appear to have gone unanswered.

Indiana University School of Journalism is at the opposite end of the spectrum, posting content almost daily. The J-school links to a variety of information, including press releases and event reminders. They also link to student and alumni work, and occasionally to relevant articles on IU’s main website.

It’s this relevance and accessibility that makes the Facebook page so popular, with more than 1,300 “likes.” Students, alumni and faculty also frequently comment on the individual posts, which keeps the content engaging.

And while the J-school has only posted a few photo albums, it seems to be on track to publishing more frequently. Photos are not only interesting content that people want to see, but they provide a simple graphic element that brings life to the page.

The City University of New York’s J-school has adopted a similar approach, publishing a variety of content every couple of days. They have taken this a step further by creating Facebook Events for upcoming events. Unfortunately, they appear to not be widely publicized, as only seven people were “attending” last week’s visiting speaker, Jimmy Breslin.

However, the page has 700 Facebook “likes,” and has begun publishing content more frequently in the last few weeks than ever before. There have also been a few (failed) attempts to create discussion board threads on the page, but none that have been updated in more than a year.

When comparing these schools, it was pretty clear the size of the program and the national reputation were not necessarily representative of how social media savvy they are. In the case of Columbia, their Twitter content far exceeds anything they publish on Facebook. For IU, it was the opposite. And though CUNY has a well-respected journalism program, it certainly isn’t one of the first schools you think of when someone says “J-school.” But yet its Facebook page is quickly growing in popularity, and the school is doing a good job of keeping students in-the-know about news and events. Perhaps that’s because CUNY is a newer J-school and has less institutional inertia when it comes to social media.

Looking at Facebook pages like CUNY and IU can be frustrating for students at the University of Missouri School of Journalism, who may wonder why we’re lacking in this area. Sure, these schools certainly have areas they need to work on, but at least they’re making a strong effort.

For alumni and students looking to stay informed about what’s going on at Mizzou’s J-school, Facebook should be the first place we look. And it can be discouraging for prospective students who don’t have a forum to ask their questions about our program.

Just Tuesday, a student commented on the Missouri School of Journalism page with a question about our curriculum. She’s deciding between Mizzou and several other top J-schools, and wants to know why we’re the best. No one had answered her in more than two days, so I added a comment in support of our school. She was so excited to receive a response that she immediately added me as a Facebook friend and messaged me with her questions.

Do I know if this girl will eventually go to Mizzou? No. But it sure helps prospective students feel welcome if they know that someone will promptly answer their questions. Our Facebook page is an important tool for first impressions of the J-school, and our goal should be to be as informative and engaging as possible.

Who Will Monitor the Pages?

As you may remember from our study of J-school Twitter accounts, we talked to Suzette Heiman, director of planning and communications at Missouri’s J-school.

Heiman, who controls the school’s Twitter and Facebook accounts, said she likes the idea of including more information on our social media feeds. However, it’s more complicated than it sounds.

“It’s a matter of how it’s going to be monitored, and having proper organization,” said Heiman.

Updating Facebook and Twitter on a regular basis requires more time and resources than are currently available, but the school recognizes that it’s important to keep students up-to-date. For the forseeable future, the J-school’s Facebook page won’t be getting a makeover. Students will continue to rely on email to get information about upcoming events and news. Prospective students looking for more information should contact the school directly to get their questions answered.

How do you think the Missouri School of Journalism could improve its Facebook page? How important are Facebook pages for journalism schools? Are they missing a key element in their communications strategies? Let us know in the comments below.

UPDATE 4/12/11: In addition to Columbia’s official J-school Facebook page, it also has an older account that it uses to share J-school news. The account, which has more than 3,000 friends, was actually created in error as a “person” instead of a “page.” Unfortunately, personal Facebook accounts can only have 5,000 “friends,” which limits its ability to reach students and alumni.

Columbia J-school’s web editor Meghan Berry manages the Twitter account, and works with the admissions staff to maintain the Facebook page. Berry says she thinks it will be easier to direct new students to the page, but realizes that current students and alumni rely on the older account.

Columbia is currently in the process of transitioning from this personal account to its official page, and will be updating both accounts for the foreseeable future.

UPDATE 4/18/11: While the list of journalism schools listed above was not meant to be exhaustive, we have heard from a number of schools that feel left out. One was the Walter Cronkite School of Journalism at Arizona State University, whose Facebook page has 2,772 fans and looks like it’s updated about once per week. According to the school’s outreach director, Elizabeth Smith, the school’s dean, Christopher Callahan “handles our Twitter account personally.” That feed has 5,162 followers.

Jennifer Paull is a senior at the University of Missouri, majoring in convergence journalism and minoring in psychology. She is also the social media editor for J-School Buzz. While journalism is her first love, after graduation she plans to pursue her masters degree in school counseling.

A version of this story originally appeared in JSchoolBuzz.com, a site dedicated to reporting the latest news and analysis about the University of Missouri School of Journalism. Founded in October 2010, J-School Buzz is produced by current J-Schoolers. You can follow JSB on Twitter and Like us on Facebook.