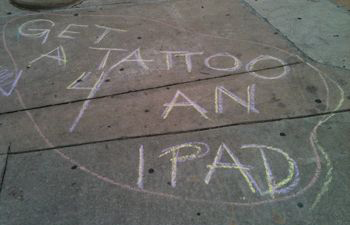 A chalk ad across from the Austin Convention Center, ground zero for SXSWi

AUSTIN, TX — By Day 3 of the South by Southwest Interactive Festival, I find that the future’s so bright, it kind of gives me a migraine.

I quickly disregard [the ACLU's] warnings and go back to compulsively checking my phone for news of that evening's parties."

Inside the Austin Convention Center, where most of the conference was staged, pillars are baroquely barnacled with multiple generations of posters, flyers, and business cards — many of which sport cryptic QR codes designed to lead smartphones to promotional sites.

Sunday night, looped on free drinks and rebuffed from attending the Mashable party, I stop to buy a hot dog from a street vendor before heading back to my hotel. Before I can eat it, a photographer asks me to pose with it, displaying the “Appkin” it’s wrapped in, embossed with yet another QR code (see image below).

Paper, online, and mobile versions of the schedule tout a staggering array of panels, screenings and parties dissecting the latest interactive trends, from the sublime, to the ridiculous, right on into the dumb. Memes abound — Charlie Sheen is a notably popular target — and everyone I hang with makes jokes about having an “app for that.”

Sick of tweeting speakers’ every utterance, I wander through the exhibition hall, tricked out like a high-tech casino. There, George Dy, the co-founder of GetContactInfo, offers to sign me up for a service that will track the analytics of how my electronic business card spreads.

I decline, only to encounter numerous other pleas to give up a bit too much of my personal info. BurdaStyle, an online sewing community, provides a postcard for me to record my body measurements.

BodyMedia.com offers temporary tattoos of their wristband device, which will “change your life” by tracking various biometrics; another company named Biosensus offers a blood alcohol content estimator app for iDevices. A project called Appthropology.com offers to tell you “what your apps say about you!”

Some companies just provide TMI (too much information) about themselves — like Moodboard, an app for collaborative design which claims to have “wild sex with the cloud.”

Tucked modestly into the corner, an American Civil Liberties Union table offers white papers and postcards warning of the privacy dangers of all this data mining. I join up in exchange for a T-shirt exhorting “Demand Your DotRights.” Then I quickly disregard their warnings and go back to compulsively checking my phone for news of that evening’s parties.

But it isn’t just the ACLU expressing some apprehension about the encroachment of digital media on our personal space. I soon run into the British news organization the Guardian. They were at the festival with both a big booth and a paper newspaper (yes, on newsprint!), which offered yet another gloss on “the end of the Internet” — this time, in the form of the merging of the digital and the physical through augmented reality, “gamification,” and biomimicry.

Guardian reporter Oliver Burkeman seems more than a bit skeptical of these buzzwords, describing gaming-for-good darling Jane McGonigal’s remarks as not just “cringe-inducing” but also embarrassing and “a little sad.”

And even at SXSWi there’s some boundary-setting going on. In the screening for Page One — a beautifully shot and nuanced portrait of New York Times media reporters — I check my phone for an incoming text, only to be chastised by the viewer sitting next to me: “Put that away please, Jesus!”

The film itself is a love letter to long-form, in-depth, paid reporting; the outreach campaign will urge viewers to “check your sources.”

In a session on “Social Media as Sci-Fi,” ever-wired moderator and io9 editor Annalee Newitz refuses to present anything on-screen, instead saying “we’ll talk like human beings.”

Panelist Molly Crabapple expresses her dystopian fear that all this gamification will abolish any real work, reducing us to earning through contests like the “Wal-Mart box-stacking challenge.”

One of many props used to draw attendees into exhibition booths

To my left I spot noted sci-fi author and futurist Bruce Sterling jotting down a few notes — in a lined notebook. A trend?

What does SXSWi have to tell us about our shared future? Back in the exhibition hall, I check with the fortune-teller automaton set up at one of the booths for insight, but don’t learn much except for my lucky color.

Still, it’s hard to be totally pessimistic after seeing speakers like Ze Frank, whose “Songs You Already Know” project demonstrates simple, gorgeous lessons about empathy and tech-enabled human connection. Walking through sunny Austin to meet some friends, I hum his chillout song, an “audio hug” written for a woman feeling dark and anxious, and recorded by multiple online volunteers.

“Just breathe,” the song advises. My migraine begins to ease.

> Fresh from SXSWi: 6 Ways to Integrate Hacking in Newsrooms by Nathaniel James