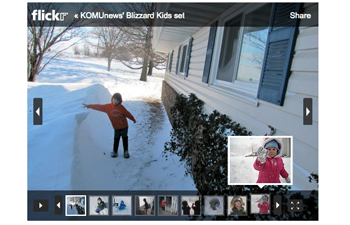 The Flickr "Blizzard Kids" set was created by student journalists at KOMU, using images sent in by the audience.

Education content on MediaShift is sponsored by the USC Annenberg nine-month M.A. in Specialized Journalism. USC’s highly customized degree programs are tailored to the experienced journalist and gifted amateur. Learn more about how USC Annenberg is immersed in tomorrow.

I’ve always dreamed of a time when my community could come together with the help of our on-air and online collaboration. All it took was a blizzard to make it happen.

I would suffer through a hundred more blizzards if it meant we could continue to share and collaborate like we did during this one."

Mid-Missouri was hit with a blizzard-like storm that dumped 17.5 inches of snow into Columbia, Mo., and even more south of the city. The entire viewing audience of KOMU-TV was home and stuck inside. An ice storm had threatened to cut power across the region, but that didn’t happen. Instead, the community was snowed in with power to their computers and high speed Internet connections. They were contained and ready to be engaged.

The KOMU newsroom was ready. The staff is a mix of professional reporters and journalists who are still students at the Missouri School of Journalism. The managers of the newsroom — who, like me, are also faculty members — encouraged the students to step up and help out in the coverage of what was looking to become an epic storm.

About 40 faculty, staff and students essentially lived in the newsroom to make sure all of the newscasts got on the air. I gathered up multiple teams of reporters, who were then placed into different communities. Each team had a really nice camera and at least one person had an iPhone, Android or Blackberry phone that could shoot video and/or Skype. I had the reporters download a set of tools that would help them tell multimedia stories about their locations and how those smaller towns were dealing with the heavy snow.

While we didn’t use all of them, I wanted to make sure we were ready and able on all kinds of platforms.

Videos on the Scene

The reporters went out to their various locations, found a hotel, and got ready. As the day went on and the snow fell harder, the mobile reporters went out into the storm. They were looking at scenes no one else was willing to travel out to see — like what a closed interstate highway looked like:

My favorite was taken the morning after the storm when one of our student reporters hopped onto a snow plow to survey the bad road conditions:

While the reporters were out sharing their stories of the snowstorm, our viewers were at home watching every link, video, and live broadcast. When the majority of the storm was over, the KOMU 8 viewers took over by sharing many of their own stories about the storm. Our newsroom has an email address that accepts moderated photos into a Ning network. Hundreds of photos were sent to KOMU — and that was in addition to the more than 620 photos posted to the KOMU Facebook wall.

The fan page was the centerpiece of our online interaction during the storm. A year ago, KOMU had fewer than 500 “fans” on the page. Before the storm, it was up to 3100. After the storm, it was up to 5500. Our newsroom has yet to use contests to encourage fans to join our page so this jump was huge. Along with the increase in fans, more and more people join in on the conversations and share on the page.

This is what I’ve always craved as a journalist working in a regional market. It’s exactly the sort of interaction I’ve taught my students to foster for years. I have always wanted open the line of communication and sharing with my news audience. This blizzard was the first time I really had that opportunity.

During the storm, I lived on my computer. I commented and reacted to every discussion for at least 36 hours. I slept very little.

My experience was not unique for the staff. My husband, who also works in the newsroom, stayed there for two days while I worked from home with our children. I had student employees who slept at the station and worked with me throughout the storm.

It was awesome and exhausting. But the relationships formed during that storm seem to be holding. In the two weeks since the storm, KOMU’s Facebook page has only had about ten “fans” leave the page.

The downsides? The amount of user-generated content we gathered was overwhelming. I wanted to make sure we had opportunities to share all it. Our anchors did stories about the content viewers had shared, and we featured the images and video by showing off an iPad on the air. I also had my students create collections of the photos our viewers uploaded. Here’s our Blizzard Kids collection:

The best moment? I’d say it was when our team found a woman and her son digging out the reporters’ car. They were compelled to help by a Skype conversation during our newscast about how the reporters’ car had been buried at a local hotel. The mother and son, who lived in town, left their house just to help the reporters get their car out of the hotel parking lot:

What lessons did we learn? That when you have a chance to engage, grab it. We used mobile tools to report and encouraged our viewers to do the same. We shared, we compared, and we were a true community on-air and online. I would suffer through a hundred more blizzards if it meant we could continue to share and collaborate like we did during this one.

Jennifer Reeves worked in television news for the majority of her career. In the last six years, she has moved from traditional journalist to non-traditional thinker about journalism and education. Jen is currently the New Media Director at KOMU-TV and komu.com. At the same time, she is an associate professor at the Missouri School of Journalism and was a part of the inaugural class of Reynolds Journalism Institute fellows (2008-09).


Education content on MediaShift is sponsored by the USC Annenberg nine-month M.A. in Specialized Journalism. USC’s highly customized degree programs are tailored to the experienced journalist and gifted amateur. Learn more about how USC Annenberg is immersed in tomorrow.