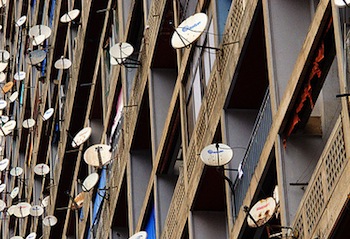 Television and other legacy media are being joined by new citizen media initiatives in countries such as Algeria. Photo of Boulevard Krim Belkacem in Algiers by Dr. John2005 via Flickr

The Maghreb is generally a term used to refer to five countries in North Africa: Algeria, Libya, Mauritania, Morocco, and Tunisia. This article explores the current state of the media in the region, and marks the effect that a burgeoning citizen media sphere is having on democracy. It is based on a contribution by the author, Algerian journalist Laid Zaghlami to the book “Citizen Journalism & Democracy in Africa,” an exploratory study undertaken by the School of Journalism and Media Studies at Rhodes University, South Africa, in July 2010. Download a PDF of the publication here.

The current political systems in the Maghreb countries are not eager to promote freedom of the press. On the contrary, they are acting to prevent the emergence of a real pluralistic media landscape and the birth of independent and active civil society.

Blogs are a key part of the citizen journalism movement, representing online spaces for political opposition and a means to promote freedom of expression and the press."

In Morocco, the ascension of King Mohamed VI in 1999 brought high hopes for freedom and liberty. They have been dashed, however, by 10 years of banned newspapers and jailed journalists — all because they dared to publish “sensitive” news about the king’s health or his family members.

Media policy changes in Morocco are only cosmetic and tend to promote the king’s image; journalists and bloggers alike are often subject to authorities’ control and surveillance over their articles and comments.

In Tunisia — where a new interim government is in power after the recent ouster of dictator Zine el-Abidine Ben Ali — several international bodies and non-governmental organizations have openly criticized the government because of the worsening situation of press freedom and human rights.

Human rights activists, political opponents, lawyers and journalists are often harassed and even imprisoned. Also many bloggers face prison charges because of their critical reports on the Internet. (Next week MediaShift will have a more detailed report about the situation in Tunisia.)

Algeria appears to have a relatively free press, compared with its neighbors. Privately owned press accounts for a dominant and prominent position in the media market, comprising 74 newspapers out of a total of 80 titles. However, economic sanctions and fines may apply in the event of acts of defamation and libel.

Algerians also seem to enjoy unrestricted Internet access, in as much as there is no legislation to supervise or monitor Internet sites. However, authorities are enacting laws to address what they refer to as “communication crimes.”

Citizen journalism in the Maghreb region — and in Algeria in particular — still has a long way to come before providing a real alternative to conventional media. But it is clear that new technologies have enabled journalists and normal citizens alike to become multi-skilled media producers.

In Tunisia, for example, bloggers have set up a collective blog called Tunisian Witness, which aims to reach Tunisian citizens worldwide, particularly those interested in developing independent national media. These bloggers consider themselves to be active citizen journalists, contributing to the idea of citizenship with news, ideas and comments, as well as actively participating in forums and debates on issues related to Tunisia.

One key issue is that the concept of citizen journalism is ill defined among the population of these three Maghreb countries. Some consider it just to be the online press.

Most newspapers have their own electronic editions on the Internet, although only few titles are exclusively available online. The latter include Algeria-based Echorouk Online and Tout sur l’Algerie [Everything about Algeria], which operates in compliance with the requirements of its French owner CNIL.

Others recognize blogs as a key part of the citizen journalism movement, representing online spaces for political opposition and a means to promote freedom of expression and the press.

There have been moves to build up common spaces on the Internet for new forms of expression, especially in the sphere of political blogging and particularly in Algeria.

The website agirpouralglerie.com [Act for Algeria], for example, was initiated by Hichem Aboud, a former Algerian security officer living in France. Also key to the political blogosphere is haddar-blog.com, which is authored by an active political opponent, Yazid Haddar.

There are citizen media websites and blogs that are not politically focused. Algerie Decouverte [Algeria Discovered] is a travel blog exploring the country’s history, nature and geography; Kherdja is a blog dedicated to outings, food and shopping.

A timid debut of professional local citizen journalism is also taking place in the Maghreb. One good example is the electronic newspaper Algérie Focus [Algeria Focus]. Based in France, it’s produced by a team of professional journalists, scholars and experts. It aims to promote freedom of expression and a diversity of opinions.

Its chief editor, Faycal Anseur has launched parallel citizen spaces with the support of social network applications including Facebook, LinkedIn, MySpace, Orkut, Flickr, Bebo, Hi5, YouTube, Basecamp, Viadeo, and Webwag. Nevertheless, citizen journalism in the Maghreb seems to have a long way to go before it can be widely grasped and comprehended.

Anseur’s concept of citizen journalism developed from a desire to elevate free and unfettered communication as a platform for generating fresh understandings about justice, politics, economics, democracy and more.

Resenting the ethical strictness and political correctness of existing Maghreb public media, his immediate aim is to secure more spaces on the Internet for free expression of opinions without restrictions or censorship.

There are basic communication gaps between within members of the same society across the Maghreb, thanks to a variety of economic, social and cultural barriers: Generational, educational, financial and gender differences.

It is too early to confirm how a project like Algérie Focus will fit into the conventional journalism model in the country. What is evident however, is how traditional media in the Maghreb has disappointed citizens.

Conventional public and private media in the Maghreb appear to underestimate or ignore the concept of citizen journalism. Their typical response has been simply to have online editions of their publications.

As such, they exhibit a highly institutionalized approach to citizen journalism, tending to think of their newspapers as spaces for all citizens’ contributions and suggestions.

Besides having a network of regional and local correspondents, some newspapers provide hotlines to their readers for comments and reports on different issues. Traditional media assume there is no need to develop new specific citizen journalism projects that would provide an alternative to conventional channels.

Only a newspaper called Le Citoyen [The Citizen] is dedicated to reporting on regional news by placing citizens at the core, and it is privately owned.

The practice of citizen journalism requires a political system that is basically founded on core democratic values, including media and political pluralism. These key tenets were in fact instilled in the Maghreb at a conference on citizen journalism in the Arab world, held in Casablanca, Morocco in 2008.

The media is an important part of the democratic process in the region; journalists themselves are actors or agents of democracy. Those working in the region’s private press should today be proud of their achievements in securing communicative spaces for public opinion.

Conventional media, and especially the private press, still has an important role to play in promoting and safeguarding democracy in the Maghreb. However, it must open up to provide the kind of forums in which journalists, scholars, political opponents and ordinary citizens alike can intervene in public affairs.

Laid Zaghlami has been a journalist, reporter and specialized chief editor in Algerian broadcasting since 1982. Most recently he has contributed to the book “Citizen Journalism & Democracy in Africa,” an exploratory study by the School of Journalism and Media Studies at Rhodes University, South Africa, available online at www.highwayafrica.com.