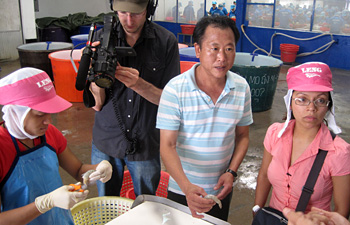 10 UBC journalism students traveled to Thailand as part of the school's International Reporting course
The Globe was preparing to do a series on global food, and we just finished this reporting in Thailand, so we discussed the idea of a collaboration." - Peter Klein

Twenty-something university students usually head to Thailand in search of exotic adventures. But when a group of 10 University of British Columbia journalism students went almost a year ago, they were searching for the untold story of shrimp, a seafood delicacy that has become common in North America.

Their work was published recently in partnership with Canada’s newspaper of record, the Globe and Mail, together with a companion micro-site to showcase the breadth and depth of the students’ work.

“The Globe was preparing to do a series on global food, and we had just finished this reporting in Thailand, so we discussed with the editors the idea of a collaboration,” said Klein, a former “60 Minutes” producer. “We shared transcripts of our interviews with one of their print reporters, and our students gave the reporter some advice on what we found in the field.”

The project is an example of a growing trend of partnerships between major news organizations and universities, and it highlights the role of journalism schools as homes for investigative reporting projects.

This is the second project of UBC’s International Reporting program. The first documentary, Ghana: Digital Dumping Ground, was produced in partnership with PBS Frontline/World and went on to win an Emmy Award in September for investigative reporting.

The International Reporting program takes 10 journalism students abroad to cover under-reported international issues. The idea of looking at the real cost of those all-you-can-eat platters of cheap shrimp came out of a pitch by one of the students, Kate Allen.

The students documented the devastation of mangrove swamps

She suggested a general story about seafood, the ocean and fisheries. As the students researched the topic, the issue of shrimp aquaculture started to take shape.

“There are environmental concerns, human rights issues, and even health issues that can affect us back home in North America and Europe, where most farmed shrimp ends up,” said Klein.

For the investigation, the students visited several sites in Thailand. They interviewed exploited Burmese migrants who are paid a pittance for their labor, filmed the underwater effects of shrimp runoff on the country’s reefs and reported on how the clear-cutting of mangrove swamps by shrimp farmers contributed to the effects of the 2004 tsunami.

“It’s a nuanced story,” said student Kerry Blackadar. “We went there expecting a black-and-white story about run-offs from shrimp farms impacting reefs and mangroves, but realized the complexities of the industry when we were in Thailand.”

Allen, the student who suggested the topic that eventually became this project, said,
“By the end of our Thai trip, we were left with a palpable sense of how North America’s raging appetite for one tiny species of crustacean had done serious harm to this beautiful country.”

The students produced a web video project for the Globe that offers a snapshot of the impact of cheap shrimp. The journalism school also produced a micro-site that highlights different aspects of the story, drawing from more than 100 hours of footage shot in the field.

The project was the result of a year-long investigation

“This project was really well suited for a multimedia piece,” said Klein. “There are several distinct themes we addressed, and in a linear TV piece we would have had to do awkward transitions between these themes. In this project, we were able to separate out the themes and address them as individual video clips.”

The website was created using WordPress, which is the content management system we use for our student online publications. I was involved in supervising the site, which was developed by student Erin Empey.

“This worked well as a multimedia project because of its complexity,” she said. “By using several multimedia tools and breaking the video into chapters, we were able to present the nuances of the story clearly.”

Here’s one of the videos produced for the project:

The website was the culmination of a year-long investigation that started back in September 2009, when the students embarked on the second year of a new course called International Reporting.

The course is an example of foundation-funded journalism. It was launched in 2008 thanks to a generous donation from Alison Lawton of the Mindset Foundation.

For the shrimp micro-site, the school also secured funding from the MITACS Accelerate internship program. The program provides federal and provincial funding to offer students the opportunity to apply their research to real-world issues.

These kinds of partnerships are evolving as news outlets, foundations and journalism schools pool their resources, particularly at a time when established media are devoting fewer resources to investigative reporting

“This is classic investigative journalism, the kind of reporting that rarely gets done anymore on international topics,” said Klein.

Alfred Hermida is an online news pioneer and digital media scholar. He is an assistant professor at the Graduate School of Journalism, the University of British Columbia, where he leads the integrated journalism program. He was a founding news editor of the BBC News website. He blogs at Reportr.net.