Online Freedom of Expression Under Siege in Thailand 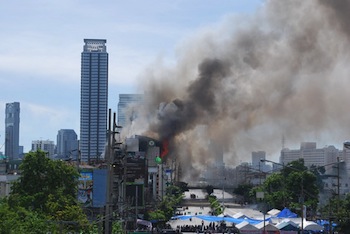 A bank burns in Bangkok after clashes on May 19. Security issues are part of the Thai Government's justification of growing censorship. (Photo: Simon Roughneen)

BANGKOK, THAILAND — “Today I have to go all the way to Khon Kaen to report to the police,” said Chiranuch Premchaipoen, the editor of Thailand’s well-known online news site Prachatai during a recent conversation in Bangkok.

The town is 450 km from Bangkok, and Chiranuch has to travel there once a month just to check in with police. This arrangement is the result of her detention at the Bangkok airport on September 24, in turn in response to a complaint made about comments posted by a third party on the Prachatai web-board. (Irony of ironies, Chiranuch was returning home from attending an Internet freedom seminar in Geneva.)

The government tries to interfere with mainstream media, so the Internet plays a different role in politics." - Sawatree Suksee

She was effectively charged with insulting the Thai King, via an alleged breach of Thailand’s Computer Related Crimes Act. Thai law prohibits defaming or insulting the King, Queen, Regent or Heir Apparent, and the CCA in turn makes it illegal to carry such material online. Until the charges are dropped, or the case goes to court, Chiranuch must make the 450 kilometer journey north once a month. She could receive a 32-year jail term if convicted of one of two charges she faces. The first goes to trial in February 2011, while the latest will be reviewed by a police panel that will decide whether a court case is warranted.

While in the process of preparing for the launch of a new report about the control and censorship of Thailand’s online media, she recently squeezed in a few minutes to talk to PBS MediaShift at her organization’s downtown Bangkok office.

“We have changed our domain name eight times since April,” she said, referring to the month when Thailand’s military-civilian-run Center for Resolution of Emergency Situation (CRES) pulled Prachatai into its swelling dragnet of blocked websites. It did so by citing threats to national security and stability amid violent protests in the center of Bangkok.

Between March 12 and May 19 this year, over 90 people died and around 2,000 were injured when Thai police and soldiers clashed with anti-government “red shirts,” some of whom were armed. The latter became known as the“men in black.”

Amid such political turmoil, freedom of expression in Thailand has taken a nosedive. Four years of color-coded protests, a 2006 army coup, and a 2007 constitution re-write combine with concerns about what the future holds after the 64-year reign of King Bhumibol Adulyadej comes to an end to feed into a simmering unrest in an increasingly polarized society. (The king made a rare public appearance on November 5 for a dazzling fireworks and light show, and thousands of Thais turned out for his 83rd birthday.)

According to a recent Thammasat University report, “Control and Censorship of Online Media, through the Use of Laws and Imposition of Thai State Policies,” just under 75,000 websites are blocked by Thai censors. The report’s authors argue that this is in contravention of Section 45 of the Thai Constitution, which says, “[a] person shall enjoy the liberty to express his opinion, make speech, write, print, publicise, and make expression by other means.” (The report is not yet available online.)

While these rights are qualified by other laws, as in all democracies that promote freedom of speech, Thailand’s recourse to emergency decrees has swung the pendulum toward restrictive interpretations of and implementation of the relevant codes.

Some of the blocked sites and closed-down radio stations, many of which are affiliated with the red shirts, were deemed to have carried content or programs that incited violence. (In one sample protest, red shirts spilled blood on the private residence of Thai Prime Minister Abhisit Vejajjva in a black magic ritual apparently aimed at driving him from office.)

More recently, the red shirt backer, one-time telecom mogul and former Thai PM Thaksin Shinawatra, has been invited to testify at the United States’ “Helsinki Commission” about what took place in Thailand during 2010. This is scheduled to take place on December 16, even though the Thai Government wants him extradited back to Thailand to face jail on corruption charges.

Foreign reporters have also faced scrutiny and criticism in Thailand. CNN correspondent Dan Rivers was the target of a Facebook campaign at the height of the protests. Thais opposed to the red shirts gathered on an anti-Rivers Facebook page to object to what they deemed to be biased reporting in favor of the protestors. Undeterred, Rivers got the first footage of the armed “black shirts,” offering close-up visual proof that the protest was not entirely peaceful — and signaling that he sought to tell both sides of the story.

“If there is really hate speech or incitement to violence, it can be dealt with through the criminal courts,” said Chiranuch during our interview. “The legal means are already there and there should not be a need to suppress legitimate voices.”

For its part, her publication insists that it is an impartial and independent online alternative to Thailand’s mainstream media. The site’s success boils down to what Sawatree Suksee, a lecturer in law at Thammasat University and lead author of the aforementioned report, calls a growing interest in Thai-style citizen journalism.

“The government tries to interfere with mainstream media, so the Internet plays a different role in politics,” she said at a recent public forum about Thailand’s netizens.

She added that web-boards and social media are booming in Thailand, giving curious Thais their information fix. “The Internet is too fast for the government to react to,” she said.

Boosted by the launch of a Thai-language version, the number of Facebook users has more than doubled since January, to 6.7 million, or around 10 percent of the country’s population, according to Socialbakers.

“Facebook is a new technology and we don’t have any way to control it yet,” Chuti Krairiksh, the minister of information and communication technology recently told Agence France-Press. Perhaps his boss, Prime Minister Abhisit Vejajjiva, will hesitate to lock down the site now that he has over 531,000 fans, and while the site’s popularity continues to grow.

However, the structure of the country’s lese-majeste laws means that the boards need careful monitoring by owners, lest they end up like Chiranuch. Aside from her case, other non-news websites are also falling afoul of the law.

Teepagorn “Champ “ Wuttipitayamongkol manages the youth and lifestyle-oriented website exteen.com, which he says gets 300,000 unique visitors per day. He lamented to PBS MediaShift that he “has been called in by the police, though his site has nothing to do with politics.”

Commenting on how political turmoil can sometimes engage Thai youth, he did say that “when the political incident took place they freely share their thoughts on my site.” However, if one user makes a complaint about another user, citing lese-majeste to the police, the police are in turn obliged to investigate.

While Thailand has regressed in terms of freedom of expression, it must be acknowledged that researching or writing a story like this would be much more difficult in some other Southeast Asian countries, such as Laos or Vietnam, and downright dangerous-to-impossible in Burma, which is usually covered by reporters based in Thailand.

For now, Prachatai can be accessed inside Thailand, without apparent hindrance, on www.prachatai3.info, while the red shirt-linked Facebook page can be viewed under Ratchaprasong News.

Simon Roughneen is an Irish journalist currently in southeast Asia. He writes for Financial Times, Los Angeles Times, Asia Times, The Irrawaddy, ISN, South China Morning Post and others. He is a radio correspondent affiliated to Global Radio News and has reported for RTÉ, BBC, CBS, CBC Canada, Fox News, and Voice of America. He has worked in and reported from over 30 countries.