Why We Gave Our Students Droid Smartphones to Capture News 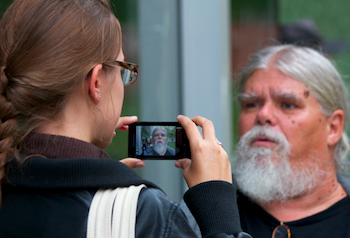 Ryerson student Caitlin Orr conducts a video interview with a Toronto resident after a fire on Wellsley Avenue
[Smartphones] are light, unobtrusive and non-threatening for folks not used to media attention."

On a cold fall night about 20 years ago I was standing in a phone booth alongside the Welland Canal. The deck of the lake freighter I was writing about was slowly sinking down as the lock level lowered. In front of me was a Radio Shack TRS-80 Model 100 computer with a faint 8-line LCD display. It was acoustically coupled to the grimy pay phone’s handset and was sputtering my copy at 300 characters per second back to my newsroom. It spurted the last period of my story in time for me to leap down to the descending, ice-rimmed deck and continue my journey.

Now, two decades later, I want my students to have the same experience. I want them to witness and then file from the scene. But, I want them to use smartphones connected to a high speed, 3G network. And I want those phones to be capable of capturing video, stills and text and sharing.

Okay, I don’t want them to back a pig-slow file transfer in a race against a departing lake freighter. But, the idea remains the same.

This semester at Ryerson University in Toronto, thanks to help from Motorola and Telus, a major Canadian cell phone provider, my fellow third-year online journalism instructor Vinita Srivastava and I have been able to provide all our two dozen students with Android-powered Droid smartphones.

While some of the students already have feature phones and Blackberries (and a few iPhones), it’s great to have them all at the same level and give them equal and free access to a technology that can get pretty pricey when you factor in a monthly data plan, especially in Canada.

Our intention is to have the students, where possible and appropriate, do as many aspects of their reporting on the phones. That includes research, using social media, recording audio, capturing video, taking still photos, writing and editing stories and filing online to Flickr, YouTube, our class blog and the Toronto-based hyper-local news site, OpenFile. (Disclosure: MediaShift managing editor Craig Silverman is the digital journalism director of OpenFile.)

We are working with OpenFile because they have created a very interesting model for hyper-local news. They fully engage communities in their own coverage and encourage non-journalists to open files on the site on issues or events that interest them or that they are curious about. Site editors then assign freelance journalists to follow up on the leads and produce stories for the site. And, those stories can be followed up by anyone and leave an online comet trail of evidence and additions in their wake.

While the recent municipal election was going on in Toronto, the students used their smartphones to bring citywide election issues down to the neighborhood level. They also live-tweeted candidate meetings and, on election night, results and reactions. They’ve already used them to capture and share video interviews with candidates, share photo essays of wards, write their stories in coffee shops and even catch breaking news in the form of a dramatic fire in a Wellsley Avenue apartment that led to the evacuation of hundreds of residents. Some of those residents were interviewed by video using a smartphone.

Other students roamed the streets, looking for local stories. Here’s a video interview that student Claire Penhorwood conducted with the owner of a local business:

Device of the Future

All well and good, but why is using smartphones important?

First, because mobile devices like smartphones are not only perfect little tools for journalism; but, equally as important, more and more people are using these devices to consume content and also to create and distribute photos, gossip, events and the other little flakes of experience that are taken for news by those that care deeply about them. So, if we want to tell and share our stories, we should learn to use and master the devices more and more people are using to consume and create it.

Second, if you want to explore community-level hyper-local journalism, smartphones are a natural tool for a diffuse, mobile news team.

Third, smartphones are powerful multimedia tools capable of capturing high quality audio and video, but they are also light, unobtrusive and non-threatening for folks not used to media attention.

Fourth, these devices are built for social networks, online sharing and diffuse content creation. If you want to teach the journalistic application of these things, they’re an ideal ally.

Finally, they help us model the future. These devices will only get faster, smarter and more capable (and probably thinner). Networks will get faster and ubiquitous. Devices like tablets and smartphones will be our go-to devices for consuming news. We should help our students get used to it.

There’s one other aspect of this experiment I should mention. The students post final stories to OpenFile, but also collectively contribute notes on their progress and process to our shared blog, Rye Here, Rye Now, which is built on the Posterous microblogging platform. Students contribute text, video, photos or photo slideshows from their phones just by emailing them to Posterous.

That combination gives students an on-the-ground tool for news capture and a near-instant place to post it. We want to make mobile news coverage gestural. We’ll let you know how that turns out.

Wayne MacPhail began in the industry as a magazine photographer, feature writer and editor. In 1983, he moved to the Hamilton Spectator where was a health, science and social services columnist, feature writer and editor. In 1991, he founded Southam InfoLab, a research and development lab looking into future information products for this Canadian national newspaper chain. After leaving Southam, he developed online content for most Canadian online networks. He now heads up w8nc inc., helping non-profit organizations, colleges and universities, charitable organizations and associations develop and implement technology-based, marketing driven communications strategies. He also teaches online journalism at the University of Western Ontario and Ryerson University.

This article was originally published on J-Source. J-Source and MediaShift have a content-sharing arrangement to broaden the audience of both sites.