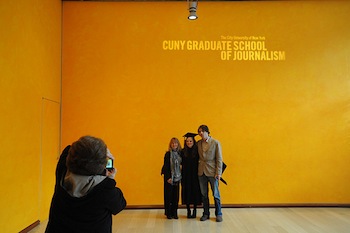 The CUNY Graduate School of Journalism is creating a new entrepreneurial journalism program. Photo by Jennifer S. Altman via the CUNY Flickr account
The challenge inherent to journalism programs today is like taking a bowling ball and trying to hit a fast-moving target." - Adam Penenberg

Universities around the country have had to shift the approach of their journalism programs to accommodate a quickly changing media landscape. New York City’s journalism schools, in particular, are working to rethink their offerings and adapt to the new world.

“The challenge inherent to journalism programs today is like taking a bowling ball and trying to hit a fast-moving target,” said Adam Penenberg, NYU faculty member and longtime online journalist. Penenberg is teaching a new undergraduate course for NYU this fall about the essentials of entrepreneurial journalism, with topics like managing analytics and using a Twitter account. “It’s very difficult for curriculum to change quickly,” he said.

Schools are trying though. The hacker-journalist and journo-entrepreneur are finding homes in programs like Columbia’s Master of Science Program in Computer Science and Journalism or in CUNY’s forthcoming entrepreneurial journalism graduate program. These cross-disciplinary degrees equip journalists with more than a background in a particular medium.

“Every student needs to grasp the entire puzzle of innovation,” said Rosen. “Everything from business models and the nature of the web to involving the community and using multimedia.”

Increasingly, universities are looking to project-based curriculum to teach students not only how journalism works now, but how it might survive in the future.

This year both the CUNY Graduate School of Journalism and the NYU Arthur L. Carter Journalism Institute launched collaborations with the New York Times on two of its “The Local” hyper-local sites to explore the questions our news media must answer as it seeks to reboot itself and as journalism schools struggle to expose their students to the full puzzle of innovation. CUNY took over operation of The Local – Fort Greene in January and NYU’s start-up The Local – East Village (LEV) goes live today.

“What I want students to do is look at the web as an opportunity to learn about journalism today by participating in it,” said Rosen, who heads the Studio 20 program at NYU that has been planning the LEV for the last year. The model for the LEV site focuses on giving the community opportunities to contribute content to the site. Called the Virtual Assignment Desk, the site will have a feature that allows community members, such as NYU students and local residents, to pitch and contribute to story assignments.

“The idea is that anyone can cover the community,” said Assignment Desk plug-in developer Daniel Bachhuber, a digital media manager at the CUNY Graduate School of Journalism.

One of the challenges these types of partnerships in journalism face is ensuring that the student-produced media remains consistent with the standards of the participating news organization. That’s where Rich Jones, editor of the LEV, comes in. “We’ll obviously bring professional level standards to the treatment of those issues, being under the Times banner brings certain responsibilities,” said Jones, a former New York Times writer. “We just want to give students the skills they were need to have a really successful career.”

Another challenge NYU faces is making sure that the site remains consistent over the entire year, not just the school year. During the school year, NYU students in the Reporting New York graduate subject concentration will be responsible for the day-to-day content; during the summer the site will be run by a combination of undergraduate summer students and graduate interns in editorial leadership roles as part of the NYU Hyperlocal Newsroom Summer Academy.

“We wanted to make it available to students across the country,” said Brooke Kroeger, director of the NYU Journalism Institute.

Undergraduates will be able to enroll in either of two six-week sessions; graduate students are eligible for paid editorial internships assisting with the professional staff of the LEV. “The summer program is integral to the ecosystem that supports the project,” she said.

NYU also must deal with inherent conflicts in coverage of the East Village, given that the university is the neighborhood’s largest land-owner. Community liaison Kim Davis will be coordinating outreach to the East Village blogosphere and will arrange any coverage pertaining to NYU itself.

“We’re willing to work with anybody,” said Jones. “We want to promote a real neighborhood-wide conversation, a forum for folks to write stories about themselves.”

The CUNY collaboration on The Local: Fort Greene is different from its NYU counterpart for a number of reasons. NYU is the largest land-owner in the area that the LEV is covering; CUNY is in a different borough than Fort Greene altogether. CUNY’s graduate school of journalism is also relatively small, with approximately 100 students in its ranks. For these reasons, it makes sense that CUNY has taken a different tack with the overall direction for its Local.

“Our goal is to move beyond the idea that we create all the content for The Local,” said Jarvis. “What we are concentrating heavily on is the encouragement of the ecosystem itself.”

CUNY is taking its partnership with the NYT on The Local as an opportunity to let faculty leadership and student journalists experiment with not only different ways of telling stories, but different ways to pay for those stories, too. Through partnerships with companies like GrowthSpur Jarvis hopes that the site will encourage citizen salespeople to monetize their own start-ups.

CUNY’s Jarvis is also leading the creation of a four-semester entrepreneurial journalism graduate program that he hopes will see its students invent the future of journalism.

Through a focused entrepreneurial curriculum, research into alternative business models for news, and an incubator/investment fund for new business models for news, the program hopes to give students an option to start their own media company, according to Stephen Shepard, dean of the CUNY Graduate School of Journalism. “We feel we have to take some responsibility for the future of quality journalism,” said Shepard.

“Students’ most important job in journalism school is to learn journalism,” said Jarvis, “but the benefit here is that they can test out their idea and get advice and help.”

Not everyone agrees with CUNY’s approach, though. “There’s a pretty clear finding on where universities can best contribute in a sector that is or should be going through an innovative period,” said Nicolas Lemann, dean of Columbia’s Graduate School of Journalism. Research is where universities can really add value, said Lemann.

Last fall, the Graduate School of Journalism released a report titled the The Reconstruction of American Journalism. Watchdog publication The Columbia Journalism Review is also run by, though editorially separate from, the school.

“We’re not best positioned to be a business incubator, and though we could do that, it’s not where we we can make our best contribution,” said Lemann.

Columbia’s Graduate School of Journalism has partly responded to the changing media environment by launching its Master of Science Program in Computer Science and Journalism, and it also offers courses like a social media seminar taught by an all-star class of professional new media journalists, such as Vadim Lavrusik of Mashable, Zach Seward of the Wall Street Journal, and Jennifer Preston of the New York Times.

Columbia also encourages journalism students to contribute to class websites. “These sites don’t last very long though, and therefore don’t build very significant audiences,” said Lemann. “One of the things I’d like to do next is build a site that lasts year-round.”

Leman’s number one goal is to have a contextual curriculum that prepares students to go out and do a story. “There’s endless stuff going on at the school,” he said. “The aggregate is that this has been a time of real opportunity for journalism schools in general and ours in particular.”