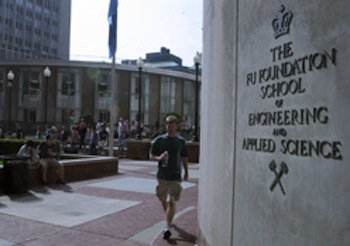 What happens when you mix engineering with journalism? Columbia University is about to find out
Not to knock journalism, but I think it's probably easier to teach journalism to programmers than vice versa." - Brian Boyer

Roughly two years ago, a group of prominent journalism educators, administrators and academics gathered in a room at Columbia University.

“It was just a small room with eight or 10 of us talking about how we can work together and combine forces between the engineering school and our school,” Tu said. “Part of the reason for it was that so much of journalism is online now … there is a lot of potential that hasn’t even been tapped.”

That meeting, along with a lot of other discussions, planning and hard work, eventually led to Columbia’s April announcement of a new Master of Science Program in Computer Science and Journalism. The program will kick off in fall of 2011 with an expected first class of roughly 15 people.

As MediaShift contributor Megan Taylor outlined in a post last year, many of today’s programmer-journalists got to where they are thanks to self-directed education and hacking together courses and other educational opportunities to build their skills. But the new Columbia program, along with other initiatives, suggests that the next wave of programmer-journalists could be trained in specialized education programs that combine a traditional engineering/computer science degree with a traditional journalism education. Universities are working to either alter existing journalism programs or create new joint degrees to formalize the training of these workers.

Along with the Columbia program, Medill has been graduating programmer-journalists since 2008, and Georgia Tech is also home to a class in “computational journalism” taught by computer science professor Irfan Essa. It bills itself as “a study of computational and technological advancements in journalism with emphasis on technologies for developing new tools and their potential impact on news and information.”

Along the same lines, former Washington Post database editor Sarah Cohen is now the Knight Professor of the Practice of Journalism and Public Policy at Duke University where her focus is on computational journalism. She recently worked with engineers to create of a new kind of timeline tool built for investigative journalists. Cohen sees a need for programs that bring programming and journalism closer together in order to help change the way newsrooms operate.

“There’s a problem with the way things are organized in newsrooms,” Cohen said. “Editors are word people and until that changes it will be hard to get reporters to focus on anything but words.”

As with any emerging area or discipline, many big questions remain with programmer-journalist degrees. Are there enough people with a background in engineering or computer science interested in pursuing a career that’s at least somewhat related to journalism? How many jobs are there out there for graduates? And what role will they ultimately play in journalism?

One of the basic questions about the new Columbia program is exactly how it differs from multimedia journalism programs and instruction.

“I’ve learned by having to do a bunch of interviews and explain the program that a lot of people confuse it with building websites or learning to use Flash,” said Tu. “We have a great program that does that. The analogy I like to use is that our students in the digital media class in the regular program use Photoshop or Flash; people in this degree would invent Photoshop.”

Here’s what Julia Hirschberg, professor of computer science at Columbia’s Fu Foundation School of Engineering and Applied Science told Wired in the spring:

The IT Department [at a news organization] comes up with software programs that the journalists don’t use; the journalists ask for software that is computationally unrealistic. We aim to produce a new generation of journalists who will understand both fields.

Applicants to the program are required to have a bachelor’s degree in computer science or the equivalent. As for the journalism side of things, one of the most important qualifications is a passion for news and information.

To make that happen, the journalism school is altering some of its existing courses. The standard entry level reporting and writing class is being rejiggered for students in the dual master’s program, but Tu said the students will absolutely learn how to report, even if that’s unlikely to be their role in the workforce.

“The course is being revamped with an emphasis on the profession and teaching them how to be a journalist and [to get them] thinking of how they can apply what they just learned about the process of producing journalism to technology and how tech can make that better,” he said. “They will learn to be journalists. There’s no watching from the sidelines. They will go on their beat and find sources and have to understand that process.”

He said graduates could end up in a range of workplace situations: at a news/information startup, as part of an in-house team at a news organization, or part of a team at an information-focused company such as Google.

Google also came up in a discussion with Rich Gordon, a professor and the director of digital innovation at the Medill School of Journalism at Northwestern University. He said it was the launch of Google News that got him thinking about the need to create what he calls “bilingual” people who are equally versed in journalism and programming/engineering.

That resulted in Medill applying for and receiving a grant from the Knight Foundation to create scholarships for programmers to study journalism at the school. To date, nine students have received the scholarships, of which four have already graduated. They study at Medill for 12 months and exit with a master of science in journalism. Since they already have the programming skills, the focus is on building out their knowledge and journalism skills.

(Full disclosure: Medill is a longtime sponsor of MediaShift, and the Knight Foundation provided funding for MediaShift Idea Lab, where Gordon blogs about the scholarship program.)

“If I can have a really great programmer and make them literate in journalism, or take a journalist and give them some literacy in programming, then that’s great,” Gordon said. “The more we work on both sides of this gap, the more impact it can have. The premise is that we think it will be interesting to have bilingual journalist-programmers and they will come up with ideas, answers, programs and innovations that someone not equally proficient in both would not.”

One similarity between the Medill and Columbia programs is that both are looking for people who already have programming skills. In each case, they say it seems easier to add journalism skills to a programmer, rather than the other way around. Brian Boyer was the first journalist-programmer to graduate from the Medill program, and he’s now the Chicago Tribune’s news applications editor. He agrees with this approach.

“Not to knock journalism, but I think it’s probably easier to teach journalism to programmers than vice versa,” he said via email. “It takes years of practice to become great at either, but the tools we use to make journalism — words, etc. — are generally accessible to a programmer. Whereas programming concepts are not general knowledge. Of course, we also use phone calls and other human contact to make journalism — so the programmers do have much to learn.”

Gordon said the challenge for these programs is to find programmers with a passion for journalism. After all, they may have to accept a lower salary in the world of news than what’s offered to engineers in other industries.

“The biggest challenge is to find programmers for whom this would be a good fit,” Gordon said. “All have done quite well in our program. I was dreading picking up the phone and having one of my colleagues say, ‘Oh this guy who you admitted just can’t hack it.’ And that has not happened at all. In fact, it’s been the opposite: My colleagues said it’s one of best things we’ve done at Medill. They bring a new perspective to classes.”

The Medill scholarship recipients have so far had no trouble pursuing a career in line with their degree. Boyer has even hired a fellow Medill grad to join him at the Tribune. In another example, two other grads have launched a start-up, Stats Monkey. It remains to be seen where Columbia’s grads will end up, but Tu is confident that they will not go wanting for work.

For the educational world, however, the question is whether these kinds of programs should become an essential part of journalism schools, or if they will remain niche programs at a small number of institutions. How many advanced programmer-journalists will be needed in the present and future? Will the tens of thousands of dollars spent by the Columbia grads be worth it in terms of their career prospects?

“The question I have is, is there a market for it?” Gordon said about the intensive dual degree being pitched by Columbia. “I suspect that without significant financial support for students there isn’t a market for it. But if there is a market for a two-and-a-half or three-year joint degree … and if Columbia proves they can make that work, that would be fabulous.”

As much as these are academic programs, they are built to graduate students that can have an impact in the workforce. On that point Boyer, the first programmer-journalist to graduate from Medill, seems fairly optimistic.

“In the last six moths, I’ve run across job descriptions from a number of news organizations — at several old-school/printy shops, at AP and Reuters, and at the new-wave web-centric non-profit shops like California Watch and Texas Tribune,” he said. “This last bunch ought to be especially interesting to the hacker journalist. From what I’ve heard, they’re getting a lot of traction out of their news applications, relative to their written work.”

Craig Silverman is an award-winning journalist and author, and the managing editor of MediaShift and Idea Lab. He is founder and editor of Regret the Error, the author of Regret the Error: How Media Mistakes Pollute the Press and Imperil Free Speech, and a columnist for Columbia Journalism Review and BusinessJournalism.org. He also serves as digital journalism director of OpenFile, a collaborative news site for Canada. Follow him on Twitter at @CraigSilverman.