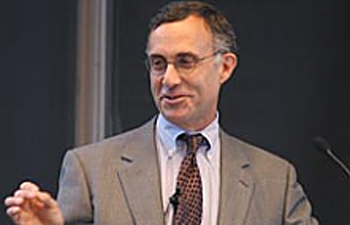 Bill Grueskin introduced a course including business principles into the curriculum at Columbia University's journalism school, which was historically hostile to the idea.
We think it's really important for students who are going out to operate as journalists to understand the business of media." - Janice Castro

For decades, journalists in mainstream news organizations were shielded from the revenue side of the operation. Many argued their lack of knowledge helped avoid even the appearance of commercial influence in the editorial well. But with increased stress in the news industry and new disruptive technologies giving even entry-level reporters an understanding of audience behaviors and income streams, things have started to shift.

Journalism educators have increasingly been helping students learn the workings of the business side of news. The trend mirrors similar changes in the newsroom. Plus, with many journalists being laid off, having the business skills to run their own media enterprise — whether it’s a blog, podcast or independent news site — is vital to many more people.

“It came to be recognized that journalists needed to play more of a role in the future of their enterprises,” said Stephen Shepard, who talked to me recently in a phone interview. Shepard is the founding and current dean of the CUNY Graduate School of Journalism and former editor-in-chief of BusinessWeek magazine.

CUNY’s J-school and a raft of other journalism schools and institutes have introduced business courses into their curricula, teaching students to read and create basic financial statements and the principles of media management. They are also launching new training programs for mid-career journalists and editors.

Janice Castro is the senior director of graduate education and teaching excellence at Medill. She told me that at Northwestern University, the Medill School of Journalism and Kellogg business school have cooperated “for a long time” in developing a media management and research center.

Full disclosure: Medill is a longtime sponsor of MediaShift.

Four years ago, as Medill revamped its curriculum, seats in two courses in media management at Kellogg were reserved for Medill students. Medill graduate students are also required to take either a course in “Audience Insight” or “How 21st Century Media Work,” and have the option to take Kellogg classes in finance.

“We think it’s really important for students who are going out to operate as journalists to understand the business of media,” Castro said. “It’s going to help them make better choices in where they’re going to work, because they’ll be better able to size up the company and its direction and its vision. They’ll know more than the brand or the name of a big media organization. They’ll be able to assess it.”

Students will also better be able to help guide the organization strategically, according to Castro and Shepard. “When you have a student who’s graduated and immediately put on the management track at a major media company, that’s not something that used to happen,” Castro said.

CUNY this month expects to announce the formation of a master’s degree program in Entrepreneurial Journalism, further enriching and extending courses offered since the school’s inception four years ago.

Retha Hill is the director of the New Media Innovation Lab at Cronkite.
During a lab-focused semester, Cronkite school students “have to think about the business implications of their ideas or the information they are gathering,” Hill told me via email.

Even at Columbia University, where school founder Joseph Pulitizer in 1904 wrote that he found the idea of teaching business “repugnant,” students are required to learn business principles. All Masters of Science students, about 85 percent of matriculants, take a class on the “Business of Journalism” that was conceived and introduced last year by dean of academic affairs and former Wall Street Journal Online managing editor Bill Grueskin.

The course includes a Harvard Business School case study about a Norwegian media company called Schibsted that moved its business more strongly into digital media; instruction on managing profit and loss in a business; the differences in advertising and circulation revenues; principles of ad pricing; and other business issues.

Grueskin told me via email that the faculty at Columbia overwhelmingly supported the course. In a letter to them, Grueskin wrote that while Pulitzer “went out of his way to exclude business courses from the curriculum,” today “journalists are increasingly being called upon to make business models work. We owe it to our students to give them a grounding in that field.”

Attendees, many of them mid-career journalists, learned disciplines such as business models, building a feasibility plan, customer acquisition and web analytics.

The Poynter Institute, a Florida-based journalism think tank and training center where I contribute articles and have lectured on business principles, in July named two Ford Fellows in Entrepreneurial Journalism who are mentoring startup initiatives and teaching business disciplines.

While some journalism purists may bemoan what they consider fuzzing the lines between “church (journalism) and state (business),” I find the move to integrate business into journalism education encouraging.

It’s healthy, I think, that reporters and editors now believe they should understand what it is that brings in the money that goes into their paychecks.

This is not to say they should pander to commercial or financial interests — and there is certainly a danger as even junior reporters learn how many page views (and by implication advertising impressions) a story they produce garners. One journalism educator told me that even in his “little blog” he considered whether to disrupt the center column with an ad and make more money.

It’s always been a balancing act, though, even if the rank-and-file weren’t completely aware. At BusinessWeek, “ad placement was always an issue,” Shepard said.

That even new J-school graduates now understand some of the struggles is probably a good thing — as long as they also are grounded in what Shepard called the “professionalism and judgment” to not “cave in all the time to advertising demands in a way that would hurt the reader or viewer.”

In the long run, those guiding journalistic enterprises must understand both the editorial principles that over time bring in and maintain a community of readers and participants, as well as the business principles that sustain the operation.

If they can do so successfully, perhaps the new news businesses they are molding and creating can then survive the fate of so many of today’s severely stressed news organizations.

A former managing editor at ABCNews.com and an MBA, Dorian Benkoil has devised and executed marketing and sales strategies for MediaShift. He is SVP at Teeming Media, a strategic media consultancy focused on attracting, engaging, activating communities through digital media. He tweets at @dbenk.