Journalism Education 2.0: Training in an Age of Radical Change 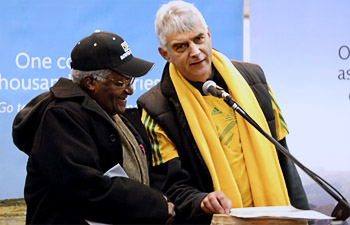 Nobel Laureate Archbishop Desmond Tutu is invited to sign the Declaration of Table Mountain on media freedom in Africa by professor Guy Berger, convenor of the 2nd World Journalism Education Congress, held recently in South Africa. Photo by "Tim Anger":http://www.timanger.com.au/
I'm afraid you're not doing your job if you can't do [social media]. It's not discretionary." - Peter Horrocks

“We are not going to make it with uninspired and uninspiring teachers!” Archbishop Desmond Tutu challenged delegates in his closing address to the second World Journalism Education Congress (WJEC2) in South Africa last month.

The anti-Apartheid warrior and Nobel Laureate described journalism as a “noble calling” and recounted his country’s hard-fought struggle for media freedom. During the event he also signed the Table Mountain Declaration, an initiative of the World Association of Newspapers that calls for an end to insult and criminal defamation laws used to censor African media.

With the theme “Journalism Education in an Age of Radical Change,” WJEC2 was staged in July at the high-tech Africa Media Matrix, home of Rhodes University’s School of Journalism and Media Studies, a UNESCO Centre of Excellence.

Remarkably, what is arguably the most technologically advanced journalism school on the African continent is situated in the remote town of Grahamstown, in the poorest province of South Africa, the Eastern Cape. Attracting, transporting and accommodating over 350 J-educators, many with First World expectations, to this J-school at the bottom of Africa proved logistically challenging. But they pulled it off in spite of the doubters.

Joe Foote, the head of the World Journalism Education Council and dean of Oklahoma University’s Gaylord College of Journalism and Mass Communication, ultimately described the Congress as the coming out party of journalism education.

According to Auckland University journalism professor Martin Hirst, the Congress was “the best thing to happen to journalism education in the 15 years I’ve been involved with it.” It was certainly an important milestone in global journalism education, and it came during a turbulent period in industry history, in the context of the astounding rise of social media.

The Congress was staged at the height of the World Cup, and in conjunction with the biggest annual gathering of African journalists on the continent, the ICT conference, Highway Africa. The event blended practice with theory — there were 90 academic papers presented alongside six expert panels and 11 deliberative forums — and networking with cultural exchange of rare depth.

Traditional dancer being interviewed by visiting media during the South African National Arts Festival in Grahamstown, which preceded WJEC2

For me, one of the key outcomes was the impact of immersion in African journalism education. This meant being exposed to African journalism teachers, some of whom have to daily confront the ravages of war and genocide in their classrooms, not to mention government censorship, the realities of poverty, and the extreme challenges of limited access to technology. But equally, it meant being inspired by the innovative practices these hardships have inspired; the media rights activism by academics that they necessitate; and the reaffirmation of the central role of journalism education globally in an era of professional upheaval and transformation.

According to the Congress convener, the indefatigable Prof. Guy Berger, the head of Rhodes’ journalism school and winner of a Knight News Challenge grant for an innovative mobile journalism project, one of the key lessons from WJEC2 is the need for journalism education to avoid taking itself for granted.

“It needs to demonstrate its contemporary relevance in both its profile and its practice,” he said. “That means playing in public space, including internationally, and ensuring continuous innovation in what gets taught, how it’s taught, and to whom it’s taught.”

By this Berger means that journalism schools need to broaden their range of training topics to include social media, for example, as well as to expand their definitions of prospective students to include professional journalists seeking to upgrade their qualifications and obtain new skills. “They should also extend to topical courses for citizen journalists and to news literacy for the general public,” he said.

These are pertinent points, and they highlight the second key conclusion I drew from the Congress: Social media literacy is now an essential element of journalism education and training.

“[Social media] isn’t just a kind of fad from someone who’s an enthusiast of technology,” the BBC’s director of global news, Peter Horrocks, told reporters earlier this year. “I’m afraid you’re not doing your job if you can’t do those things. It’s not discretionary.”

Social media sites, including blogs, are now essential items in journalists’ kitbags. They are tools for newsgathering and dissemination; for investigation and crowdsourced fact-checking. Perhaps most importantly, though, they are platforms for engagement with what NYU’s Jay Rosen famously dubbed “the people formerly known as the audience” — each one of whom is a potential source.

Certainly, YouTube, Twitter and Facebook may ultimately be replaced by new, hybrid sites, but the concept of an unmediated, interactive, audience-engaged and activated real-time web platform for journalism is here to stay. And that means social media theory and practice must be embraced by journalism teachers and embedded in journalism training.

There are rules of engagement for journalists — including student journalists and those who train them — operating in these spaces. Rules which require more than mere technical knowledge of how to tweet or post a Facebook status update. They also demand reflective practice and critical thinking in reference to ethics and professionalism.

So, while individual journalists are now expected to swim with the social media tide, rather than resist it, it’s incumbent upon their employers, industry trainers and educators to provide the training necessary to equip the practitioners. This means journalism teachers need to be facilitating both technical training and critical engagement with these new technologies and their impacts. They should also be researching and practicing in the field themselves.

It was this reality that concentrated minds in a deliberative forum at WJEC2 on the role of social media in journalism training. I chaired the forum, while world-renowned online journalism pioneer and media trainer Mindy McAdams provided expert input. Twenty-five journalism educators representing every continent debated the issues, from the inevitable “But who _is _a journalist?” to the ethical challenges of verification and the importance of authentic engagement in the social media sphere.

Ironically, we debated the role of social media in journalism education in the midst of a week-long South African Internet outage caused by damage to an undersea cable between Mombasa and Mumbai. Frustrating as this was at times, it created a unique opportunity to reflect on the changes the real-time social web has wrought. And we ultimately made six recommendations on the role of social media in journalism education to the Congress. These will form the basis of a detailed report to be posted at the WJEC2 website and published academically in the coming months. The recommendations are:

These recommendations will feed a broader assessment of the state of global journalism education and its future functions that will flow from the WJEC2 forums on a range of essential themes.

Firing on All Cylinders

For future journalism education to perform at optimum levels, it will need to be firing fully on three cylinders, according to Berger.

“It will require excellence in terms of teaching facilities and faculty for full-time learners; it will mean accessible offerings for part-timers, media professionals, ordinary citizens and community-based groups; and it will need journalism educators to perform as public intellectuals through interventions about the key information society debates of the day,” he said.

And I would suggest journalism education needs to fire up a fourth cylinder, one which involves schools and educators activating social media to ensure they remain globally interconnected, while also interacting publicly with their broadening constituencies. This is in the interest of both the future of journalism education and the profession Desmond Tutu describes evocatively as a “calling.”

One response to “Journalism Education 2.0: Training in an Age of Radical Change”