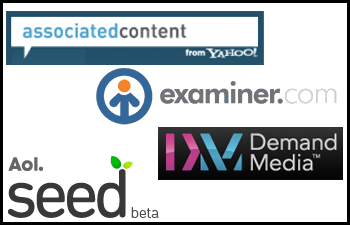 From time to time, we provide an overview of one broad MediaShift topic, annotated with online resources and plenty of tips. The idea is to help you understand the topic, learn the jargon, and take action. We’ve previously covered Twitter, local watchdog news sites, and Net neutrality, among other topics. This week MediaShift editorial intern Davis Shaver looks at the “content farm” phenomenon.

What we're looking for is nothing less than tomorrow's journalists." - Patch editor in chief Brian Farnham

As traditional news outlets continue to lay off journalists, a new generation of companies is betting big on online content. Their approaches differ significantly, but are all built on the common premise that for online content to be profitable, it has to be produced at a truly massive scale. The proliferation of these so-called “content farms” — a name the companies predictably dislike — has raised the ire of journalists and pundits alike.

“If you want to know how our profession ends, look at Demand Media,” wrote Jason Fry, a former Wall Street Journal columnist who edits Reinventing the Newsroom.

Of course Demand Media is far from being the first online content company built on search-driven data. Both About.com and Weblogs Inc. built content based on popular search terms, and employed large teams of content producers and bloggers to create stories to help answer common questions.

It’s easy to see why Demand Media’s strategy has been replicated by start-ups and start-arounds alike. When Demand Media CEO Richard Rosenblatt discovered that algorithmically-generated assignments could generate 4.9 times the revenue of traditional editor-generated ideas, the sheer profitability of this new content paradigm guaranteed that companies like Demand Media would be viewed as outliers in the context of a news industry facing significant fiscal troubles.

This is the first article in what will be a full week of PBS MediaShift special coverage dedicated to next generation content companies. We’re calling this series “Beyond Content Farms” and each day will see us examine different aspects of these companies and what they mean for the web and the media world. Below is an overview of the major companies that are taking a “content farm” strategy of pushing out massive amounts of content, a primer that sets out some of the key players, what they do, and what their goals are.

Overview: When AOL severed ties with Time Warner last year, it took the opportunity to reinvent its failing business model, which had been predicated largely on it dial-up service. Under the leadership of CEO Tim Armstrong, AOL has embraced a mission of becoming the world’s largest producer of high-quality content. A corollary goal: to be the world’s largest net hirer of journalists next year.

Brands: AOL’s portal, AOL.com, serves more than 59 million people in the U.S. monthly, a firehose of traffic that the company can direct at a large portfolio of editorial brands, which include major sites such as AOL News, Black Voices, and Engadget.

Content platform: AOL operates two major platforms for freelance content production. Seed, which AOL built itself, deals largely with the production of text-based and photographic content. StudioNow, which AOL bought this past winter for $36.5 million, caters to video production. Between the two platforms, AOL has access to more than 40,000 content creators, a small army that the company hopes to increasingly utilize in the coming months.

Algorithm: Since the inception of its new content-based strategy, AOL has said that identifying content opportunities through demand/search data would be a major focus of the corporation. But nearly eight months later, AOL’s David Mason, who runs its content platforms, said told me in an interview: “We are in our early days with demand technology. The floodgates have been somewhat shut and as months go by we’ll see them open.”

Local: AOL has entered the local news space in a big way with Patch, which had 83 sites live in communities around the country as of early July and many more in the pipeline. Each site is run by a professional journalist who reports, edits, and curates. “What we’re looking for is nothing less than tomorrow’s journalists,” said Patch editor in chief Brian Farnham in an interview with MediaShift. Editors are able to hire freelancers through Seed to round out coverage, namely to populate the community’s business directory with rich content. “We’re sending teams to communities who will go door to door and collect data about those places, structure it in our templates, and have a really rich Yellow Pages,” said Farnham. “The concept of Patch was not just to find a reporter and editor, it was to create a modern online platform to digitize the town.”

Overview: Demand Media seems to be headed towards a $1.5 billion IPO, proof positive enough for the many competitors who have since embraced its algorithmic approach to online content. This approach is necessary to achieve its daily production of 6,000 written and video-based pieces of content. CEO Richard Rosenblatt won’t call the 10,000 people who produce content for Demand Studios journalists, but he believes Demand Media helps journalism by generating content and revenue for outlets that can “take that money to fund other reporting.”

Chief revenue officer Joanne Bradford (formerly at Yahoo) has said that the company’s immediate goal is to outgrow AOL and then Yahoo, but that might be just the beginning. Rosenblatt has said that the company’s true goal is to publish the world’s content. The similarities with Google, whose mission is to organize the world’s information, don’t end there: Google was the last technology company to break $1 billion in its IPO.

Brands: Demand Media’s largest brand is eHow.com, home to 2 million “solutions” that reach more than 59 million people in the U.S. monthly. Other brands include Livestrong.com and Cracked.com. Demand Media is also the largest uploader to YouTube.

Algorithm: The Demand Media algorithm, the most famous of its kind, received the fullest treatment to date in a Wired article published last fall. Kydd, the executive VP in charge of Demand Studios, explained the algorithm’s purpose in a column published last December. “These algorithms help companies to predict this content will have an audience, an advertiser, and the ability to get traffic to an article or video before its creation,” wrote Kydd. To accomplish this goal, the algorithm is fed data about what users are searching for or talking about on social networks, which keywords are being bought by advertisers, and what content is already available. Based on that information, the Demand Media algorithm generates bundles of keywords that are translated into meaningful headlines by a second algorithm called the Knowledge Engine. At that point, an editor proofs the headline and submits it as a potential assignment on the Demand Studios content platform.

Local: Demand Media has not entered the local content market.

Overview: With over 90,000 pieces of content published monthly, Examiner.com has filled out its 238 city sites and expanded its staff of “Examiners” to over 42,000. CEO Rick Blair told Forbes that he doesn’t think the site is getting the respect its traffic deserves, especially when compared to less mature offerings like AOL’s Patch initiative.

Brands: Examiner.com attracts more than 13 million people in the U.S. monthly to its domain, which generates geo-targeted content depending on the location from which the user is accessing the site. Each of the Examiner.com city sites is populated with locally relevant content and filled out with nationally relevant or “evergreen” content. Much of the branding on the site derives from the writers themselves, who have titles like New York Celebrity Dog Examiner” and Commercial Real Estate Examiner”. The site refers to its writers as “Examiners” and they are compensated based on a formula that factors in things such as traffic and ad clicks. The company is frank about saying that being an Examiner is at best a part-time gig for the vast majority of people.

Platform: Examiner will soon launch a completely redesigned version of its website and content management system. It is moving to Drupal 7, and is currently training its Examiners on what to expect, and how to use the system. (More details about its training program will be featured in a subsequent report this week.)

Algorithm: Examiner does not use an algorithm to assign content. Each Examiner is expected to generate her own content within an assigned category.

Local: Examiner.com’s main focus is local content, but Blair cautioned that, “We offer stories about the best bike trips in the city and where to go on the weekend. We’re really not covering news.”

Overview: Yahoo bought Associated Content for over $100 million this spring, some say as a step away from the high-cost content Yahoo was producing through a partnership with former NBC entertainment head Ben Silverman. The purchase greatly increased Yahoo’s ability to produce content for its network. Associated Content had also been courted by AOL CEO Tim Armstrong, an original investor in the company who was a college roommate of Associated Content founder Luke Beatty.

Yahoo CEO Carol Bartz has had trouble identifying the company’s mission, but it is reported to be preparing a new product strategy that will be released later this month. Expect it to focus on four main areas of content: Premium, social, crowdsourced, and original.

Platform: The Associated Content platform is home to more than 380,000 contributors. In contrast to Demand Studios, contributors do not need to complete an application process to begin accepting assignments or submitting content. The Associated Content editorial staff, which unlike Demand Studios and Seed.com is not composed of freelancers, review more than 50,000 pieces of content each month.

Algorithm: Associated Content uses an algorithm to determine potentially profitable assignments, but hasn’t said much about it publicly. However, with the influx of data from the Yahoo mothership, expect to see demand-driven content appear on an increasing number of Yahoo properties. Yahoo has already begun integrating demand data into the editorial practices of sites such as the Upshot, a new news blog run by Yahoo News.

In addition to the articles linked above, here are a few more stories about next generation content companies:

Content ‘Farms’ – Killing Journalism — While Making a Killing at The Wrap

Inside the Examiner.com Purchase of NowPublic – Hyper-Local Media at BNET

To see all stories in the Beyond Content Farms series, go here”.

60 responses to “Your Guide to Next Generation ‘Content Farms’”