What Skills Will Future Journalists Need? 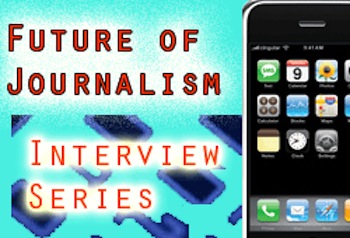 You have too many people that are old, or my age, that are moaning and they are really missing the tidal wave." - Benjamin A. Davis

Education content on MediaShift is sponsored by Carnegie-Knight News21, an alliance of 12 journalism schools in which top students tell complex stories in inventive ways. See tips for spurring innovation and digital learning at learn.news21.com.

For the past two years, OurBlook.com has been conducting interviews with top experts in journalism and media about the future of journalism. In my previous post for MediaShift, I offered a collection of views about where the industry and profession is headed.

We recently began asking interviewees to outline what they see as the role and skillset of the journalist. Overall, experts agreed that the future journalist will be:

The following are some of the best quotes from series:

“What you are seeing is that journalists are having to be stretched a lot more with their skills … I think that the best way to categorize or describe today’s journalist would probably be somewhat of a multitasker and someone that is very, very determined [about] doing some serious storytelling. If you want to be rich this is not your profession to go into. But it is really a profession of service. And so I would say that it’s someone who is determined to be an artist, a storyteller, and really provide a service for the public. I think some of those core things are still there.” — Vadim Lavrusik, community manager for Mashable.com and recent Columbia School of Journalism grad

“As recently as five or six years ago, it was enough to be one kind of reporter. It was enough to be a television reporter, or to be a print journalist, or to work for a wire service, or to work on radio. Unfortunately, that’s not the case anymore. The firewalls between the newsrooms and the interactive side of things have really fallen down. And if you’re going to do a story, you have to produce it on several levels. And if you are a reporter, your bosses are certainly asking this of you.” — Christopher Brown, National Press Club’s vice chairman on new media and professional development.

“There is always going to be a need for people who can string a coherent sentence together and gather accurate information. In creating your brand, you have to be true to yourself because it becomes a lot easier to do that if it meshes with your personality.” — Amy Vernon, freelance journalist and the top female Digger of all time

“I think it’s very important for journalists to look at what is happening in the real world, and try to find ways where their skills can be used to meet real market needs. If you can have your own baseline business of clientele and services that you offer, you can still have another job. When they lay you off or fire you — and they will, that’s the way that business is — you don’t want to be stuck scrambling. You will be in a much better position to guide your own career and take the work that you want, if you can be in business for yourself.” — Amy Gahran, info-provocateur, media consultant, and former writer for Poynter’s E-Media Tidbits

Adam Chadwick on the Future of Journalism from OurBlook.com on Vimeo.

“My major concern with the emerging class of journalism students [is that] … a lot of them see what’s going on in the industry, not just newspapers, but broadcast and radio as well, and they don’t want to be a part of it anymore. What kind of message is being sent to the next generation of journalists right now? It’s really sad to see. So, you just wonder who’s going to step up and be there?” — Adam Chadwick, a filmmaker currently working on “Fit to Print,” a documentary exploring the decline of the U.S. newspaper industry

“We are trying to be a lot more welcoming … we are trying to encourage more dialogue than we did in years gone by. I think that’s helping not only do the job that we are called to do, but its going be something that rescues the press.” — Michael Ray Smith, professor of communication studies, Campbell University

“I think the question becomes how much of a role do journalists have with regards to the future of journalism. In my opinion, they hold all the cards at this point … journalism and reporting are still the same. That has not changed one bit. The tools that we use to do it, that’s what is changing so rapidly.” — Bill Handy, visiting professor, Oklahoma State University

“You have too many people that are old, or my age, that are moaning … and they are really missing the tidal wave. My students are riding the crest of that tidal wave. As a matter of fact, they don’t even know it’s a tidal wave … that they are in a digital tsunami. They are just having fun in the water, and guys my age are on the beach and seeing this tsunami and running like hell.” — Benjamin A. Davis, former producer at MSNBC.com and NPR, and current instructor at Rutgers University

“A great deal is the same. The job is still is try to figure out what is significant and interesting and go report on it, and tell stories, and try to disperse that as best you can, to the public. Of course all of those steps have changed along the way. What is significant and interesting has changed, how you report is changing somewhat, and how we disperse it is changing a lot. But the basic tools are still reporting and storytelling.” — Mike Hoyt, executive editor of Columbia Journalism Review

Sandra Ordonez calls herself a web astronaut who has been helping organizations navigate the internet since 1997. Currently, she helps run OurBlook.com, a collaborative online forum that gathers interviews from today’s top leaders in the hopes of finding tomorrow’s solutions. Since December 2008, the site has been conducting a Future of Journalism interview series. Sandra also heads up the Facebook page, “Bicultural and Multicultural People Rule.” Previously, she was the Communications Manager for Wikipedia. She graduated from American University with a double degree in International Relations and Public Relations.

Education content on MediaShift is sponsored by Carnegie-Knight News21, an alliance of 12 journalism schools in which top students tell complex stories in inventive ways. See tips for spurring innovation and digital learning at learn.news21.com.

6 responses to “What Skills Will Future Journalists Need?”