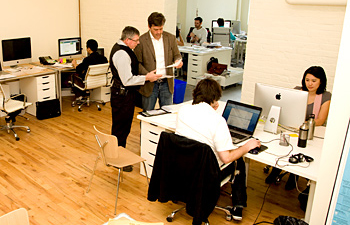 OpenFile has a small team of journalists based in Toronto

Two Canadians took a gamble that local news still matters this week. The two represent the hopes of both old and new media.

One was a $1.1 billion buyout (in Canadian dollars) of Canada’s largest newspaper chain, the Canwest newspapers, led by experienced news executive Paul Godfrey.

A mix of the old and the young, the established and the new, is to be welcomed as journalism tries to figure out its future."

The other was the launch of a hyper-local, participatory news start-up called OpenFile.ca, backed by venture capital and led by former CBC, CTV and CNN journalist Wilf Dinnick.

Both are betting on the public appetite for local news, approaching it from two sides of the business spectrum, with each of them hoping to revitalize the media ecology in Canada.

As in the U.S., the news industry in Canada is in trouble. The sale of the newspaper chain was a result of some of these problems, brought about by the collapse of the Canwest media empire under a burden of debt.

Newspapers in Canada are seeing falls in circulation as readers turn to websites, blogs and social media for news. But print is not doing quite as badly as their counterparts across the border. Circulation is on a gentle decline, down by around 4 percent from 2008 to 2009.

Print is far from dead. According to the Canadian Newspaper Association, more than 4 million newspapers are sold every day and three-quarters of Canadians read a print edition every week. So there is still a market for the daily paper edition.

The man leading the Canwest purchase, Paul Godfrey, brings to the deal a successful track record in print. In the 1990s, he transformed the Sun Media chain of tabloid newspapers into a business worth $1 billion.

Now he heads a group of Canwest creditors and investors who may want to see a return on their capital sooner, rather than later. In essence, they are looking to recoup costs by issuing public shares in the summer that, hopefully, will rise as the economy improves and the advertising market recovers.

The new company will own and run 46 daily and weekly publications across Canada, together with several related Internet properties such as Canada.com. Despite the challenges facing print, all but one of the newspapers, the National Post, are making money. In April, the publishing arm of the crumbling Canwest empire reported quarterly revenues of $254 million, down just 1 percent from a year earlier, with profits of $41 million

The challenge, as other newspapers have found, is navigating the transition from print to digital media, at a time when most of the revenue still comes from selling newspapers. Digital brings in less than 10 percent of revenue for the Canwest papers. Godfrey is looking to increase this to 25 percent

The new owner is making all the right noises, talking about keeping all the newspapers going, preserving newsroom job and benefits and adopting a digital-first strategy. In a note to Canwest staff, he wrote:

Our potent brands are composed of a pan-Canadian mix of major metro newspapers, the National Post, a wealth of superb digital properties and community newspapers.

What is less clear is how he is going to steer the legacy print business into this digital future. Newspapers are complicated beasts, involving layers of editorial, production, administration, circulation and sales, let alone capital costs of printing presses. The question is whether the new owners are ready to invest in the group to ensure its long-term viability or looking for a short-term return.

By comparison, the new Toronto-based startup, OpenFile.ca, has none of these legacy issues. Launched on May 11, the site has a handful of journalists on staff, among them MediaShift managing editor Craig Silverman. It is based on a collaborative pro-am model, with journalists working with the community.

Readers are invited to submit ideas for stories, which are vetted by an editor and either assigned to a professional journalist or put up on the site for review by the community. Once a story is published, the community is invited to add their comments and content to the professionally produced content, as it says on the site:

OpenFile was designed to let the public decide what local news stories should be covered. You suggest, we report. You comment, we respond. You create, we publish. End result: A vibrant, ever-evolving local news conversation among newsmakers, news-gatherers and news readers.

For now, OpenFile is focusing on Toronto. It is hoping to replicate its model in other Canadian cities, and potentially also in to the U.S. The man behind OpenFile, Wilf Dinnick, enthusiastically described the launch as “one of the biggest media ventures in Canada since the launch of the National Post.” He has reasons to be positive. The site is backed by several million dollars of venture capital for the first three years.

Dinnick has acknowledged that “our tough time is going to be in year three,” once the initial funding comes to an end. So it is hoping to attract revenue from sponsors and advertisers eager to reach local audiences.

OpenFile’s approach bears some similarities to Spot.us, where readers are asked for donations on specific pitches from journalists. The difference with the Canadian idea is turning to the local community for the story pitches. This has led to some skepticism about the quality of news tips from the public or that rival journalists may poach the best ideas.

OpenFile does not see itself as the traditional city paper. “We’re not a newspaper. We don’t expect to be a newspaper,” Dinnick told The National Post. Rather it is rethinking journalism as a participatory and collaborative process with the public, where journalists involve the public in what was once the preserve of professionals.

The news article is not the final product, but rather part of an interaction with the community, who can add and develop the story. “We’re calling it a ‘file’, because a story isn’t just a single, static text document anymore. It has to be something that lives,” Silverman told the Nieman Journalism Lab.

The success of OpenFile will largely depend on attracting a committed and engaged community of users. Aside from traditional media, Toronto already has lively local sites, among them BlogTO and Torontoist. A writer at Torontoist has argued that OpenFile’s approach “isn’t actually much different from the model currently in place at sites like BlogTO and here at Torontoist, where much of what gets covered is also prompted by openly acknowledged reader tips.”

The buyout of the Canwest newspapers and the launch of OpenFile share one thing in common: No one can say whether or how either will dramatically change the face of the media industry in Canada.

Both bring a focus on local news and both stress the importance of digital. A mix of the old and the young, the established and the new, is to be welcomed as journalism tries to figure out its future.

Alfred Hermida is an award-winning online news pioneer and journalism educator. He is an assistant professor at the Graduate School of Journalism, the University of British Columbia, where he leads the integrated journalism program. He was a founding news editor of the BBC News website. He blogs at Reportr.net