4 Reasons Why 3D TV Is Years Away From Adoption 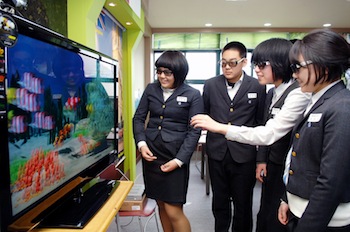 People test out a 3D television from LG. Image via Wikipedia

After a multi-decade struggle, 3D is finally catching on in theatres.

It was a challenge for 3D movies to get where they are today, but I’d say the studios (and theater operators) are finally calling it a success. All the pieces have come together, spurred on by financial support of the infrastructure and much-needed exposure of the latest 3D technology thanks to “Avatar.”

The prospects for 3D television, however, are another story. I like the concept of another dimension as much as the next guy, but can the big screen 3D theater experience translate into the typical living room setting? In my opinion, not really. At least not yet. From a design standpoint, it’s going to take time for consumers to buy into the idea of 3D TV.

While the technology’s developers may think they’re sitting on a gold mine here, they’ve unfortunately failed to consider some critical issues that will severely slow its adaption. As a result, here are four reasons why 3D is years away from adoption in the home.

The assumption that acceptance and desire for a technology in one environment (movie theaters) will translate well to another (home) is a mistake that’s easy to make. But, in this case, several differences between the contexts will deter adoption of 3D in the home.

At the theater, it’s about a communal experience of many people joining together to be entertained in a way they can’t replicate at home. They want to go out for the evening and make an event out of it. But entertainment at home is by its nature a more casual and personal experience that, with the advent of 3D, raises issues such as:

In these (post?) recessionary times, people view large expenditures differently than they did a few years ago, when every room in the house was seen as a prime spot for a new flat screen. 3D-TV is not the sort of design solution people are willing to spend money on these days. The industry is pushing an expensive novelty that adds little of the kind of meaningful benefit consumers look for in high-end purchases.

The economic downturn has encouraged consumers to re-examine their shopping behavior, and they’ve become more thoughtful and considerate of their purchases. Buying decisions fueled by novelty or impulse have been replaced by a desire for long-term value from a product, with benefits that consumers readily see as adding to the quality of their lives. Consumers now ask themselves “Will this make my life easier, better, or more fulfilling?” rather than “Oh, look at that shiny new toy, I want one!” — especially if it’s a matter of several hundred or thousand dollars.

People will eventually replace their current flat screens when needed, and may well consider 3D at that time. But 3D will not, on its own, be a compelling reason to buy a new TV for most consumers within the next few years. The flat screens in use now are largely recent purchases, with many years of service life to come. People bought into these TVs too recently to consider an upgrade within the next couple of years.

The adoption of 3D-TV faces a similar challenge to the acceptance of Blu-ray DVDs, but without the “stick” the DVD market has had — the threat that standard discs will be discontinued, forcing a (relatively inexpensive) upgrade to a new player. Blu-ray may be the new standard format for DVDs, but 2D-television is not going anywhere for the foreseeable future. And with incompatible 3D technologies competing in the market right now, it’s inevitable that consumers will wait on the sidelines until a universal format like Blu-ray becomes the norm.

So will 3D-TV eventually catch on? Inevitably the tech will improve, enough homes will be at a stage to upgrade to new screens, prices will come down, it may no longer require glasses and so forth. But for the moment, 3D simply doesn’t deliver a meaningful experience to consumers on the home front. The value they will place on the technology is not at all commensurate with the hassles and costs of adapting it.

Home entertainment is about spending enjoyable time with family and friends, kicking back and forgetting about the stress of the day. Any new technology aimed at this market has to be responsive to the underlying needs people have for this aspect of their lives. The DVR is a perfect example of truly meaningful design in this arena, and its rapid success was virtually ensured from the day it was introduced. It solved a problem and addressed a compelling desire.

Similarly, instant access to movies and events through direct streaming to your TV has taken this desire for personal control over TV viewing to a new level. That’s the kind of innovation people are looking to spend money on right now. Online gaming, direct to TV, seems to be the natural evolution of this trend. Several companies have promised that, as soon as next year, we’ll be able to stream the latest games to our TVs without the need for a dedicated console that’s obsolete in two years. Play when you like on a subscription basis, no need to invest in games that you may tire of in a few weeks. If it works as promised, I think it’s going to be a huge success.

But for now, I think Sony and other manufacturers betting big on 3D TV have missed the point. Design and innovation have to be in sync with consumer needs, even if they lead by a year or two. Pushing 3D TV seems like more of a “we can do it, so let’s do it” approach to product development, ignoring the reality that adding simulated depth to the at-home viewing experience is pretty low on most people’s priorities right now.

Image of 3D dinosaur by Mark Wallace via Flickr.

Joel Delman is the Los Angeles-based design director of Product Development Technologies. With a background in corporate law and business, and 15 years in product development, Joel understands the business side of creativity and how to strategically guide innovation and design. Prior to joining PDT, Joel spent time as a senior designer for Zenith Electronics, Cousins Design and Henry Dreyfuss Associates (New York). He also practiced corporate law with Gunster, Yoakley & Stewart in Florida. Joel received his Master of Industrial Design from Pratt Institute, his JD (corporate and patent) from Harvard Law School and his Bachelor’s in Economics from New York University’s Stern School of Business. His personal blog is Product Fetish.