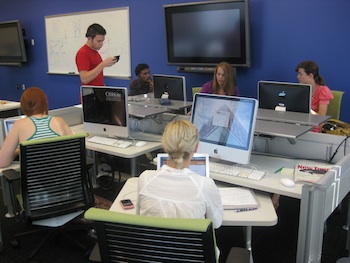 Two weeks ago, I sat in a room at the Walter Cronkite School of Journalism & Mass Communication at Arizona State University and listened as several groups of students delivered their pitches.

At most journalism schools, this would have involved the students proposing ideas for articles or TV or radio reports. Instead, the groups of three or four students stood up and pitched their businesses. One group was working on a project involving targeted information delivered via mobiles phones. Another group was thinking about connecting people who have something to offer with groups that have specific needs. (I’m being vague in order to respect confidentiality.)

One of the goals is to get them to fully appreciate what the Silicon Valley startup culture is all about." - Dan Gillmor

The students are enrolled in the digital media entrepreneurship class that’s part of the Knight Center for Digital Media Entrepreneurship at ASU. The program is directed by journalist and entrepreneur Dan Gillmor, who works closely with CJ Cornell, a serial entrepreneur who is the Center’s entrepreneur-in-residence. (Note: Gillmor also writes for MediaShift Idea Lab because of the Center’s grant from Knight.)

The Knight Center at ASU is one of a handful of entrepreneurial journalism programs and courses that have cropped up over the last few years. Two years ago, MediaShift’s Mark Glaser examined the program led by Jeff Jarvis at City University of New York’s Graduate School of Journalism, as well as courses at the Newhouse School of Public Communications at Syracuse University and the Graduate School of Journalism at the University of California at Berkeley. When that story was published, Gillmor was just getting the ASU program going.

When Gillmor invited me to come speak to several classes about the work I do with Regret the Error, it seemed like a perfect opportunity to take a look at how the program at ASU has progressed. I sat down with Gillmor and Cornell to talk about what they’re teaching students, how it translates into success in the real world, and why journalism needs people with an entrepreneurial approach. You can also go here to learn about some of the Center’s more successful projects.

Maybe we could start with you giving me the quick history of how this program got started.

Dan Gillmor: It was Callahan’s idea.

CJ Cornell: And I really credit him for that. And you know, in the sense that he’s the dean of a journalism school…

Dan Gillmor: He’s pretty entrepreneurial. He convinced me to launch it, and I convinced CJ to help me launch it.

CJ Cornell: ASU is extremely committed to entrepreneurship. As a serial entrepreneur, and as someone who’s also been in it so long that I’m cynical about entrepreneurial programs, ASU is one of those that rose right above others … As I always say, the first half of the digital media revolution was all about the engineers and the platforms. The second half is all about the content. And journalism is a profession of content. There is no better place for this to be. The only thing is that journalists need to work without a net, without the organizations behind them — which needs to be entrepreneurial. We’re finding it’s not the entrepreneurial thinking that’s hard — it’s getting them to not think about technology. Because when you don’t know about technology, that’s all you think about.

A lot of the ideas I heard today from students weren’t what you would describe as pure news business or journalism ideas.

CJ Cornell: And I have a slight objection…to defining what is or what isn’t journalism too early in the process, because it’s changing. And to judge too early if this is related to the news is a bit of a mistake…We always say that when the electron was discovered nobody knew that we’d have a world driven by electronics, and so you can’t judge it that early.

There are two poles when thinking about entrepreneurship, and we avoid either one. One is from a pure technology approach. We get business majors coming in here all the time going, “What is my technology? What am I licensing, what’s the unique intellectual property?”

The other end of it is you go out and ask the customer a question about a problem that they have, and solve that problem. That’s consulting, as far as I’m concerned. If you noticed, most of these people start off with people issues and behaviors, motivations, promotions — almost a psychology approach. Because, as we said, if you solve that [kind of] problem then any technology will work. That’s the whole idea: Even if you get the technology wrong, it doesn’t matter. You still have a problem you can solve.

In terms of the structure of the program, at what point in their studies do the students come into this? Is it all undergrads or is it grads as well?

Dan Gilmor: It’s both. There are more graduate students than undergrads…There’s technically some requirements that include having done some digital media.

CJ Cornell: Actually let’s clarify this just a little bit, though. We have two courses. One is a digital media entrepreneurship class, which is what you’re looking at here. [It] is a combination of hands-on and typical lectures. The other one is the advanced projects class, which is fairly intensive. It’s projects, there’s no classrooms; it’s generally independent in nature and that does require approval…The other significant part of it is that in the beginning this was 100 percent journalism students. And because of outreach sometimes it’s now between 40 percent and 50 percent non-journalism students: Engineering, psychology, law, business. It was decided to, you know, mix up the disciplines and get them to speak different languages, so to speak. And the dynamic is, I believe, really helpful for the students to earn to collaborate with completely different approaches.

How much has the program changed? It’s been around for two years, so compare what you imagined it to be and what it is. How different is it?

Dan Gillmor: It’s changed a lot, and when I was talking [to dean Callahan] about coming here, one thing I promised was that, after several years, it would not resemble what it started as. There’s still a faint resemblance, but a lot has changed. The Center is a startup, and startups are ambiguous and sometimes chaotic, and you have to adjust to the conditions. So we’ve tried to learn from mistakes, and the key original mistake was to have the whole class work on a single project that was timed to an election…It did not work.

What was the project?

Dan Gillmor: It was something that I’d wanted to do myself for a long time, but it didn’t work. It was about getting public participation and the thrashing out of issues. I mean, there is still a lot of good residual stuff that came from that, but it didn’t work. Breaking them into teams, however, does work.

And so that first one was a project that you brought in and said, ‘This is what we’re going to work on together.’ Whereas now they generate their own ideas?

Dan Gillmor: Their ideas are much better than our ideas, as they know.

CJ Cornell: We actually are almost completely moving away from saying, ‘Come in with an idea.’ They actually develop the ideas [during the class] from looking at disparate trends or observations. There’s a method to this madness, because if every student came in having to have an idea, they all tend to uniformly think of selling textbooks back or ways of finding better bars in the area.

It seems like the other departments I’ve read about are about teaching journalists how to have this sort of entrepreneur’s gene. This seems to be a bit different in that respect.

Dan Gillmor: I don’t think you can add an entrepreneur gene. Gene splicing’s not that good yet. One of the goals is to get them to fully appreciate what the Silicon Valley startup culture is all about, so that even if they don’t do a startup — and most of them won’t — they understand what’s involved at some level. And they can participate in cultures — whether they’re corporate or startup — where they’ll be valuable. Increasingly, that’s the way companies and organizations are going to have to work, so we think it gives them a useful [experience]. It’s not like they’ve learned how to be entrepreneurs in a complete way.

CJ Cornell: It’s like boot camp in that we’re making them more mentally prepared for what follows. First of all, they’re learning self-reliance, but most important they are learning that there is no checklist to this. There is no guaranteed outcome…Most of them are looking for a checklist saying, ‘What do I have to do to get an A?’

Dan Gillmor: One thing we do say at the beginning of each semester is that a project can crash and burn, and they can still get an A…In smart organizations, they may not reward things that collapse, but they don’t punish good failures. The goal is always great products, but the more important thing is that they learn something.

If they go out and end up in a more traditional media organization, can they bring the startup mentality to these organizations?

CJ Cornell: There are a couple of things in there, one of which is the assumption that there will be a traditional media organization…

Dan Gillmor: Which I don’t take as a given at all. I’ve been saying that one of the goals here is to help them imagine that they can invent their own jobs.

What’s the measure of success for you folks, in terms of what you hope to see.

CJ Cornell: Ones that continue on after the course is done…

Dan Gillmor: Every semester, and every time I give a talk to students in other places, I make one point, and I mean it completely, which is that I’m jealous of these people starting their careers at a time where there’s never been more possibility. The career path that I got on that was lovely — and more financially rewarding than I could ever have imagined — is gone. And if it’s not gone, it’s going. But, my God, they really can invent their own jobs. I’m jealous.

Journalism was such a system for so long. It was, ‘If you like print, you work at the small community paper then you work your way up and maybe you get to be a columnist,’ for example. It was very structured, and now it’s destruction.

Dan Gillmor: But the creative ones are just, they are going with it.

CJ Cornell: Anytime you hear an announcement about one of our students here getting a new job, it’s some job that is literally brand new [laughs]. It didn’t exist before and has been created just for them.

Craig Silverman is an award-winning journalist and author, and the managing editor of MediaShift and Idea Lab. He is founder and editor of Regret the Error, the author of Regret the Error: How Media Mistakes Pollute the Press and Imperil Free Speech, and a weekly columnist for Columbia Journalism Review. He also serves as the digital journalism director for OpenFile, a new collaborative news site for Canada.Follow him on Twitter at @CraigSilverman.