Are Photos by Aid Workers an Invasion of Privacy in Haiti? 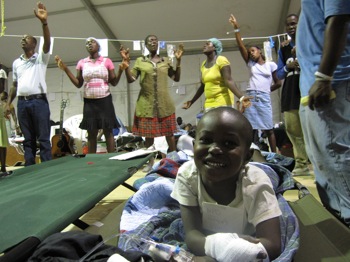 Earthquake survivors in a tent hospital in Haiti. Photo by Michelle May

I recently spent a week in Port au Prince, Haiti, helping in a tent hospital set up at the airport.

When I arrived back in San Francisco, I wrote about my experience in Haiti on my blog and posted pictures I had taken. I also posted photos on my Facebook profile, including images of smiling children who had just been operated on, long lines of patients, and even some “fun” photos, such as a few of me letting off some steam with a brigade of Portuguese firefighters at their camp (see photo at left).

Is it more invasive just because some of us don't have a press pass?"

Now, a rumor is circulating among volunteers that we should remove any photos of our time at the hospital from Facebook and other websites, unless we had received permission to take photographs.

On one hand, it seems like a reasonable request. Some of the photographs posted by volunteers seem invasive: There are photos of an anonymous leg being cut into, an un-named mother giving birth, people who are clearly sedated, and bleary-eyed volunteers drinking beer at the UN café. They have attracted attention and criticism at the hospital, and among some of our Facebook friends.

One friend of mine, who put a strange mix of suffering, surgeries, and drunken party photos on Facebook, posted a rant defending her right to post whatever she wanted. Her logic: If CNN can film a woman giving birth, then why is it wrong for her to do the same? She pointed out she is saving lives, and had the cojones to drop everything to help in Haiti in the first place, unlike her critics back home.

This ethical debate is inspired by the ability of anyone to easily create and distribute media such as photos, videos or blog posts. Professional media have long been training their cameras and mikes on the victims of natural disasters, but now anyone can do it, too. Is it more invasive just because some of us don’t have a press pass?

Recently, a man who was rescued after being trapped for 27 days glimpsed the sky and the CNN cameras at almost the same moment. This isn’t surprising. At one point, when I was in Haiti, I was counseling a traumatized mute boy at the hospital when all of a sudden he and I we were swarmed by a U.S. news network camera crew. Their lenses were inches from the boy’s face as a doctor I had not met before talked about the boy’s needs and his “thousand-yard stare.” I remember thinking, “What this boy needs is for you to get the camera out of his face.”

Later, a reality show doctor showed up and demanded that doctors operate on an 87 year-old woman with a broken pelvis that the TV doctor had “rescued” from her home. A real doctor accused the TV doctor of exploiting a disaster for her own interests.

Perhaps this is why blogs, Facebook posts, and tweets from citizens can sometimes do a better job of putting a human face on the suffering in Haiti, and bring it home to people who may not otherwise pay attention. We’ve become desensitized to the way traditional media portray events like the recent one in Haiti; it’s possible that the authenticity contained in the accounts of non-journalists on the ground have a greater impact on folks back in the States.

Like most of those who have responded so generously to the crisis in Haiti, even the grandstanders probably had good intentions. But they can get in the way of those working to help the victims, and they can make it appear as if all of us on the ground are being insensitive, heedless of privacy, and are pumped up by our own do-goodedness.

Not surprisingly, the day after the reality TV doctor made her dramatic visit, strict media guidelines were put in place at the camp. Reporters needed to be vetted, sign in, and wear “authorized” media badges.

To Remove or Not?

So will I take all my Facebook photos down? Well, they have always only been accessible to my friends — but I did remove a few photos and stories from my blog. I will not, however, take down all my stories and photos. Even though I am returning to the hospital and don’t want to jeopardize my chances to do so, I feel certain that nothing I’ve posted is an invasion of someone’s privacy.

Then again, maybe I am simply desensitized and part of the system myself.

UPDATE (3/8/10): The above post was written after my first trip to Haiti, and since then I returned for another stint helping at the hospital. When I returned, relief workers weren’t allowed to board the plane in Miami until after we signed a declaration regarding photography: We would only take photos with permission, none of them would show someone suffering and only if they were for academic and medical purposes. This February visit was far more formal than my first visit to the tent hospital in January just weeks earlier.

I refrained from taking photos during my first day back at the tent hospital, which was not an easy task as I am someone who loves photography. Interestingly enough, I observed volunteers shooting pix, mainly on their iPhones. Later that night, a doctor showed me a photo of a patient’s foot — a case of Elephantitis — a condition that causes enlargement of certain extremities.

“This is the stuff you only see in textbooks,” the doc commented, making it clearly a legitimate educational photo. He went on to show me more photos, until he landed on one of a woman covered in surgical scrubs holding the hand of a patient in the ICU: “This one’s my favorite.” He did not realize that was me, under the surgical scrubs. Now the shoe was on the other foot, but in this case of course I did not mind. It showed me in my best condition — not sedated or suffering. I think some of us forgot that while showing us at our best we may be showing others at their most low points.

As the week went on I began taking photos — always with permission, and usually only patients who were on the upswing, with the exception of a patient who was on the brink of death who I worked very closely with. It was not for academic or medical reasons. I simply wanted to remember his kind face and his angelic eyes. The few days before that I had posted his story, using a fake name “Jean,” on my Facebook page. I was encouraged that his story moved poeple and that friends wanted to send money down to help him. Jean was happy to have his photo taken to remember our time together; he had a grace about him that I am sure I would not have in such a state.

Little did he know I was setting up a fund for him and his family. Even though Jean never said it, he was suffering. He was shot in the spine and was newly quadrapelegic. He was fighting infection and we had nearly lost him earlier that day. He and his family survived the quake, although their home did not. They felt lucky, but then an attempted carjacking left him paraliyzed.

Once back in San Francisco I spoke to one of my friends who had influence in the tent hospital. I made a general statement that there were “too many rules now.” She asked me to be specific. I was talking about photography. She had a strong retort letting me know that she did not aprove of the photos I posted on Facebook. She told me all the very obvious privacy rights of patients. If it was not me who had done it, I would be lecturing just the same. But when you are there, and it gets so personal, we tend to bend the rules, making exceptions for ourselves that we would not make for others.

After my piece published on MediaShift, a nurse I worked with wrote to me, wondering out loud if the photos she had posted on Facebook were inappropriate. I thought that they were. She went on to rationalize that she felt it was okay to be sure that the world knows what is happening there. Is it really neccesary for me to see how bloody bed sores can be on someone’s naked bottom, or actual blood dripping out of a just-amputated limb?

As someone thoughtfully commented on this site, it boils down to our own personal moral compasses. I would never think it’s okay to post such things, but for some reason this woman thinks that by us seeing blood coming out of a patient it will keep Haiti in the news and keep money coming in. Maybe she’s right and I just need to watch more of the Surgery Channel to get used to such images? Or maybe, like me, she became personally involved with these patients and wanted to tell their stories back home?

Michelle May is a San Francisco-based relief worker, traveler and school psychologist. Follow her travels on her blog.

17 responses to “Are Photos by Aid Workers an Invasion of Privacy in Haiti?”