9 Tools to Help Live-Stream Your Newsroom 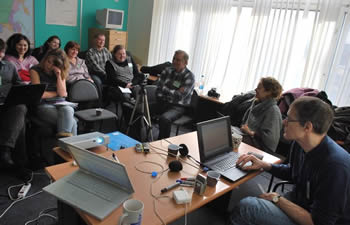 The Moscow workshop in progress

“We’d like to write blog posts, but don’t have time.”

That’s the oft-heard lament in newsrooms. More and more traditional journalists recognize the benefits of blogging and social media, but many just can’t figure out how to add them to their existing workload.

The value is that the audience will give you helpful suggestions, and practicing transparency will lead to increased credibility."

I have a solution that seems to work in our newsroom. When faced with this issue, I recommend colleagues do everything they usually do, such as have brainstorming sessions, take part in editorial meetings, do research and collect web links — except now they should do it publicly.

So now, for example, brainstorming can be done with a wiki-like tool, and notes from a meeting or background research can become a blog post. Instead of saving bookmarks as private “favorites” in a web browser, you can publish them as social bookmarks. Ideas and discussions can be expressed as blog posts or as status updates on social networks.

I call this approach “live-streaming the newsroom.” It was the subject of a three-day workshop I recently gave in Moscow. I was brought there by two Russian media NGOs: Eurasia-Media, the media training department of the New Eurasia Foundation, and the Foundation for Independent Radio Broadcasting (FNR).

Below is an overview of the tools we used and discussed during the workshop. We also put them into use to cover the “end of the line” of several Moscow subway lines (an approach that was inspired by a project by The New York Times).

All the above mentioned tools only become game changers in the newsroom if journalists stop thinking that they should only publish a nearly perfect, finished product. Newsgathering is an ongoing process. It’s great to publish perfectly crafted articles, videos and audio — but this should not stop us from streaming the production process.

It will, of course, be difficult to do this for some investigative work; but I think many projects can benefit from bringing your community into the brainstorming phase. It hardly takes any time at all.

Most of the things a journalist does to cover his or her beat can be live-streamed using the above mentioned tools, among many others. The value is that the audience will give you helpful suggestions, and practicing transparency will lead to increased credibility.

How do you integrate social media into the workflow of the newsroom? Which other tools would you use? And don’t forget that you can still add to our social media mindmap wiki!

One response to “9 Tools to Help Live-Stream Your Newsroom”