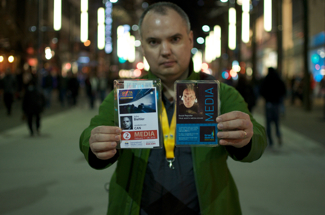 At the Winter Olympics, members of the press affiliated with official, IOC-designated media outlets have access to the Main Media Center and are given a special accreditation badge. The MMC provides workspace — as well as massages and McDonald’s — for “the approximately 2,800 accredited members of the written and photographic press,” according to organizers.

That’s been the case at many Olympics. But the Vancouver Games are notable for the alternative, unofficial media centers and accreditations that have sprung up. These groups cater specifically to independent media, citizen journalists, bloggers, and other people who seek to report and document the Games on their terms. (The Beijing Games failed to inspire a similar outpouring of citizen journalism due to restrictions placed by the Chinese organizers.)

Some of the [people wearing the TNMH badge] have been able to get past security and get into venues because security think it's official." - John Biehler

Well over 100 unofficial media folks are united under the True North Media House, a virtual media accreditation organization that’s aggregating content from bloggers and citizen journalists at the Games. The TNMH initiative also helps them coordinate and communicate with each other via a mailing list and #tnmh Twitter hashtag, while also serving as a point of aggregation for reporting and content.

If TNMH is the virtual alternative media house of the games, then the W2 Culture + Media House is the physical headquarters. Located in Vancouver’s Downtown Eastside, a neighborhood known as the poorest in Canada, it provides independent media with a free lounge and range of unofficial press conferences, as well as affordably priced access to video editing suites, camera gear, and workspaces.

People affiliated with NowPublic, CNN iReport and other media are paying roughly $300 to secure a spot at W2 for the duration of the Games. To put it into perspective, that’s roughly what Games organizers charge for two weeks of wireless Internet access at the Main Press Centre.

I visited W2 the day of the opening ceremonies and Irwin Oostindie, executive director of the W2: Community Media Arts center, told me how the Games activities fit into their usual operations, which involve helping teach media skills and techniques and offering a space for cultural events. He also explained the significance of having an alternative media center in the Downtown Eastside:

Oostindie predicted this will be the last time we see a facility like W2’s at the Olympic Games.

“We thought, ‘The Olympics are coming here, so let’s get together and create an experiment around running a physical social media center,’” he said. “It’s probably the first and last one the Olympics will have because, essentially, Beijing didn’t allow them and [I predict that] London in 2012 will embed them and monetize them. There won’t be any independent social media centers in London.”

He said the idea is not to keep traditional media and independent media separate, as they have a lot learn from each other.

In addition to providing workspaces for media from Canada, the U.S. and England, W2 is hosting press conferences from community groups and people such as the female ski jumpers who were not allowed to compete in the Games.

“We’re hosting a cluster of voices that are rather relevant to the content of the Olympics being held in Vancouver,” he said. “Playing the role of a neutral infrastructure provider is kind of interesting for us. We’re kind of a mixing point. It’s a space where the Olympic Resistance Network can come and [so can] corporate sponsors and Olympic athletes.”

As can people like Percy Lipinski. A former diplomat, the Vancouver resident is a dedicated and prolific contributor to CNN iReport. He paid to have a workspace at W2 for the Games, though he isn’t reporting the entire time. Last week I reached him in Costa Rica, where he was shooting stories that he planned to submit to iReport.

“I read about W2 in one of the local magazines in Vancouver and it appealed to me because I had applied for and received credentials [for the B.C. International Media Centre (BCIMC), which is operated by the provincial government] through iReport — and then a week before the Olympics started they said, ‘We decided you’re not really a reporter’ and denied my accreditation,” he said.

The BCIMC is a center where media without IOC accreditation can work from. The people controlling its accreditation process eventually relented and gave Lipinski his pass back. But he had already decided that W2 would be the place for him.

“For [$300] I got access to youngish, good news editors and camera people and the ability to work at the desk,” he said.

Last Wednesday, an email went out on the True North Media House email list to let people know the group would be holding an “Olympic Hockey Tweetup” the following day between 4 p.m. and 9 p.m. at a local club. “There will be an appearance by special guest Guy Kawasaki at about 8 p.m.,” the message said.

Apart from a few organized events like that one, the people sporting TNMH badges have largely roamed Vancouver on their own, or in small groups. They go where they choose (and where security lets them) and report, photograph and tweet what they see. As a result, the TNMH news feed is an eclectic mix of content. It’s also spreading far and wide, according to Dave Olson, one of the organizers.

“What we’re starting to see now is people are getting their coverage up and out and distributed well before the mainstream media,” he said.

Olson, whose day job is the marketing/community director for Twitter client HootSuite, hatched the idea for TNMH with Robert Scales, who runs Raincity Sudios and VancouverAccess2010.com, and local photographer Kris Krüg, who is contributing photo essays to MediaShift during the Games. (Krüg is also involved with W2.) You can watch the documentary With Glowing Hearts to see the history of TNMH, as well as the W2 project. Here’s an excerpt of the film’s look at TNMH:

Now that the games are up and running, Olson said it’s a matter of letting the TNMH-accredited reporters go about their business, produce content, and see what happens. One surprise so far has been Aleks, a 5-year-old Vancouver boy who’s blogging about his Games experience with the help of his dad. He proudly wears his TNMH badge wherever he goes.

“We have people who four or five days ago didn’t self-identify as social media reporters, but they had a passion for photography or making videos,” Olson said. “Once the Games were on, they realized they see stuff no one else sees. A lot of people are just stepping up and saying they want to be a part of this.”

The reports in the TNMH news feed and discussion on #TNMH bring to mind the old saying that youth is wasted on the young. It’s hard to imagine professional media are bounding around with as much joy, delight and enthusiasm. Certainly, not having an assignment editor or producer harrassing you on deadline helps keep the TNMH crew happy. But you can’t help noticing how much fun they seem to having.

John Biehler is an e-business analyst for an insurance company in Vancouver, but he’s also a self-described camera geek. He loves taking pictures and shooting video, and he shares his work on a blog and on Flickr.

Biehler booked off three weeks of vacation so he would be able to document the 2010 Vancouver Winter Olympic Games, and now spends his days and nights reporting on everything from the torch relay to tall ships and zip line rides. His videos and photos are available in a special Olympic section of his blog, but they’re also showing up in the news feed of True North Media House.

Biehler proudly wears his TNMH media accreditation badge around his neck, and is often stopped by people who ask what it means, and where he got it.

“Some of the [people wearing the badge] have been able to get past security and get into venues because security think it’s official,” he said. “They don’t know we printed them out on a home printer and went to Staples and got them laminated.”

Biehler is enjoying a unique experience because he has both a TNMH pass and an official one from the BCIMC. He is among the lucky few bloggers and folks from online media outlets granted access to the province’s media center. For the most part, he said, the professional media folks have been welcoming.

“They seem to work more hours,” he said of the pros, “and it’s been interesting talking with them about what I’m doing and what I’m working on, and comparing gear. Even if they’re working for a big company we’re similar in that we’re just trying to figure out the best way to do something.”

Olson said TNMH is more about documentation than journalism.

“But we’ve taken great pains to educate people about journalistic standards and how to tell a mixed media story,” he said. (The resources section on the website offers a wealth of useful information.)
The night we spoke, Olson was rushing off to meet a group of hockey fans from Latvia, an experience he looked forward to documenting.

“How often do you get a chance to meet someone who has come halfway around the world to your city to enjoy something that you’re also passionate about?”

To which he could have added: and then share that experience with the world.