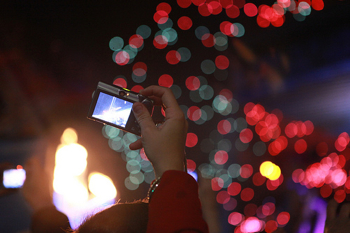 A member of the public documents the opening of German House during the 2010 Vancouver Olympic Games. Photo by Kris Krüg

It has become second nature for people to capture experiences, events and news using their phones, cameras and computers. We live in a world were journalism is an action — and citizens have stepped up to answer that call to action.

As a result, the story of the 2010 Vancouver Olympic Games is by no means limited to the version being told by official media sponsors. Social platforms like Twitter, Facebook, WordPress and Tumblr are enabling citizens and independent media to provide real-time coverage of the culture, events and community that are part of the Olympic Games. More stories are being told than ever before — and most of them have nothing to to do with the athletic events.

Kris Krüg is a photographer with Static Photography and a prominent member of the citizen and alternative media community in Vancouver. He is out in the city covering the broad spectrum of events that are occurring during the Olympics.

This is his photographic recap of citizen and alternative journalism at the Olympic Games.

One response to “Citizen, Alternative Media Converge at Olympic Games in Vancouver”