8 Lessons Journalists Can Learn From Scientists 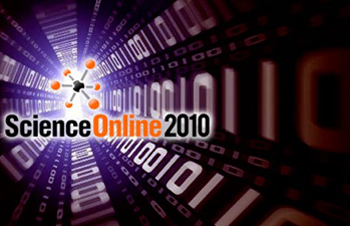 The ScienceOnline10 conference starts this Thursday, and about 275 scientists, educators and science writers from around the world will gather near Raleigh, N.C. to discuss many of the same online tools and issues that journalists are examining.

Sessions will focus on topics like “citizen scientists,” crowdsourcing, and the best iPhone apps for gathering and sharing information. The conference is sold out, but plenty of ways exist to attend ScienceOnline10 virtually.

These scientists, educators and communicators have been tackling many of the same issues that have become critical for the media industry."

For journalists, the biggest name at the conference is Anil Dash, a pioneering blogger and one of the founders of Six Apart. He’s the creator of Expert Labs, an organization designed to help connect experts with government, and will talk Saturday afternoon about Government 2.0.

The conference and its participants have many lessons for journalists, and many participants also have long histories of successful experimentation and community building. The conference has had heavy support from members of ScienceBlogs, a network of 138 science bloggers that recently announced a new partnership with National Geographic. Members of the group began experimenting with reverse publishing to print from blogs way back in 2006 with “The Science Blogging Anthology.” The anthology has been published every year since the first edition went from concept to print in about a month to coincide with the inaugural Science Bloggers Conference in early 2007.

The network of bloggers that launched this conference, in turn, grew out of BlogTogether, a community of N.C. bloggers and online communicators active since at least 2005. These scientists, educators and communicators have been tackling many of the same issues that have become critical for the media industry during the last couple of years. Their experiments and successes are worth examination. Here are eight lessons that journalists can learn from the convention and its supporters.

One session at the conference will tackle hard questions about online civility and debate, and why it matters. The session is led by Janet Stemwedel, Sheril Kirshenbaum and “Dr. Isis,” a physiologist at a major research university who blogs but fiercely guards her real identity. Discussion and links are available at the conference wiki.

2. Diversity is worth tackling.

Sessions at the conference, which is being held just before the Martin Luther King Jr. holiday, will include diversity in science and technology, reaching out to underrepresented individuals in science, and figuring out a way to reach across generations.

This conference was born as a result of relationships built through BlogTogether.org, an early, active group of bloggers loosely based in North Carolina’s Research Triangle area, and in Greensboro, N.C. Conferences created by the group have brought in champions of citizen voices such as Dan Gillmor, and have attracted support from traditional media executives like editor John Robinson of the Greensboro News and Record. An early national conference started by the group, ConvergeSouth, was the brainchild of blogger Sue Polinsky. At this conference, one session, The Importance of Meatspace, will explore the power of real-world connections.

Science bloggers, by definition, target relatively small audiences. Cognitive Daily, for example, focuses on peer-reviewed developments in cognition psychology, which could be considered a niche of a niche of a niche. The blog’s “About” page says, “The research isn’t dumbed down, but it’s explained in language that everyone can understand, with clear illustrations and references to the original research.” The blog, produced by a husband and wife duo, Dave and Greta Munger of Davidson, N.C., does seek levity. There are “Casual Friday” posts that deal with subjects like the use of curse words, annoying online restaurant menus, and emoticons. It has been consistently publishing since at least January 2005.

5. The discussion of pros vs. amateurs isn’t over.

In science, as with journalism, the role of scientists (or journalists) is still evolving. What exactly is a “citizen scientist”? How do they differ from the pros, and aren’t the pros “citizens” as well? How do science or journalism bloggers fit within the information ecosystem and, thanks to the explosion of content, whom do you trust? Where does government fit? One session at the conference will deal with citizen scientists, and longtime blogger and conference organizer Bora Zivkovic also has a roundup of the sessions focused on journalism. For further reading, check out Dan Schultz’s Idea Lab post outlining what journalists can learn from citizen scientists.

6. Can people document while they participate?

Three people involved with the great Pacific garbage patch research effort and its related media coverage will discuss the melding of real-time science, non-profit advocacy, outreach and journalism in a session, Talking Trash – Online Outreach from the Great Pacific Garbage Patch. Can someone participate in research and still report that research? Can someone be an advocate and still produce trusted information? How will society fund journalism that covers specific research? And did funding from the innovative Spot.Us project work well as a way to publish a story in the New York Times about the garbage patch? As a related issue, how can information about research reach ordinary people?

7. Networks and trust are crucial.

Links, blogrolls, citations of sources, guest blogging, and the older technique of “blogging carnivals” build trust and develop networks that pay off. Trust, reputation and “personal brands” remain crucial components in the search for information, and those elements help readers filter the deluge of data and information. The thriving ScienceBlogs site shows the power of branding and networking. But a flip side exists: How can laypeople learn critical thinking and use skeptical questioning to better evaluate sources and information? Two conference sessions deal specifically with trust: How does a journalist figure out which scientists to trust, and Trust and critical thinking.

8. Experimentation and transparency pay off.

You might expect a group of scientists to embrace experimentation. But this group in particular explores new ways of sharing information transparently, opening the process to people in other fields and locations. A concrete example: The reverse publishing of science bloggers’ posts required an element of financial risk in order to share information with a wider audience. Organizers are also using the conference wiki and social media tools like Flickr, Second Life, Twitter and Facebook to promote and share the conference in a broad way. Specific sessions deal with Open Notebook Science, and the Open Dinosaur Project, an effort to crowdsource the digitization of data.

3 responses to “8 Lessons Journalists Can Learn From Scientists”