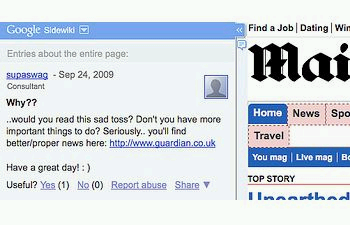 Googe Sidewiki: taking control of comments away from websites?

Journalists and news outlets are accustomed to offering comments and criticisms about others, but they’re not as used to being the subject of public comment themselves. In the online world, where technology can and does upend established relationships, journalists and online news outlets are joining the ranks of the commented-upon.

The shift has taken place due to the increased presence of commenting and feedback features on news websites, and partly thanks to the use of comment-friendly platforms such as WordPress. In these contexts, the news outlets have chosen to accept user comments, and they retain a certain amount of control over which ones appear on their site. Now, a new technology, Google’s Sidewiki annotation tool, is poised to present a challenge to website owners, including news outlets, that attempt to control the interface between their site and end users. Suddenly, they won’t have as much control over comments related to their content.

News outlets may find that the dialog on and about their sites is increasingly controlled by Google."

And that change in control might lead to some legal tussles down the road.

Google debuted Sidewiki in September. The tool permits users of the Google toolbar to write comments about any website they visit. These comments are then visible to other Sidewiki users when they navigate to the same page. But the comments are hosted by Google, rather than the website itself.

The Google Sidewiki site provides a graphic depiction of what a Sidewiki entry looks like. When the Sidewiki button on the Google toolbar is clicked, a sidebar opens to the left of the webpage and displays the comments entered by Sidewiki users.

Usually, a website’s publisher decides whether or not to provide comment functionality, and if such functionality is provided, the site’s owner retains the ability to delete unwanted comments. But a website operator has virtually no control over the Sidewiki functionality. This is something of a major shift.

Attack of the Commenters

Some websites have already been the subject of negative Sidewiki comments. In a September 24 blog post on Econsultancy, “Google Sidewiki: Brands under Attack,” the author included examples of Sidewiki comments on the Microsoft and Apple websites. Microsoft products were described as “useless” and “crap,” and Apple was slammed for “lying” and shipping products with “severe bugs.”

Another example comes from a September 24 comment on the website of the Daily Mail. A commenter named “supaswag” wrote, “Why?? … would you read this sad toss? Don’t you have more important things to do? Seriously … you’ll find better/proper news here…” The link included in the comment led to the website of a Daily Mail competitor, the Guardian.

A website owner is given few options to respond to comments like those listed above. Website owners can claim their sites through the Google Webmaster functionality, and thereby gain access to the top comment spot on Sidewiki. This means they can add whatever content they wish to the thread about their site(s). Other user comments are sorted according to a secret Google algorithm that takes into account the responses of Sidewiki users to the question of whether or not a particular comment is “useful,” among other factors.

There is a link for reporting abuse, but the link leads to a form that is available to any Sidewiki user; it does not appear that website owners themselves are given any priority when it comes to communicating concerns to Google.

Sidewiki and the Law

One of the legal issues raised by Sidewiki is whether it intrudes upon the rights of website owners to control their interface and interactions with users. A similar type of technology that comes to mind is pop-up advertisements. Web users have become accustomed to seeing pop-ups — and equally accustomed to blocking them. But several years ago, the ubiquitous and intrusive nature of pop-ups led a group of media companies to join in a litigation effort against Gator. Gator distributed technology that enabled the delivery of pop-up advertisements on websites without the permission or participation of the sites’ owners.

The media company plaintiffs, as well as other plaintiffs in similar lawsuits, took the position that the pop-up advertisements violated trademark law. The media companies were successful in obtaining a preliminary injunction, and the litigation was eventually settled favorably. The company that distributed the pop-up technology is now out of business. As a result, there was never a definitive resolution of the issues raised in that case.

The lawsuits related to trademark law were based upon the fact that the pop-up functionality was being used to deliver commercial advertising, which presents a different set of legal considerations. But what if the comments that appear next to a site via Sidewiki are non-commercial comments by users, rather than commercial messages? Legal challenges by site owners to Sidewiki may be complicated by the fact that Sidewiki facilitates all kinds of messages, both commercial and non-commercial.

Has Sidewiki Got Legs?

Sidewiki is not the first or only service of its kind. Services such as Draw Here, Fleck, Trailfire and MyStickies have offered website annotation capability for a few years, but none of these services have garnered widespread adoption. (One annotation startup, ReframeIt, claimed recently that Google appropriated its patented technology in creating Sidewiki.)

Right now, Sidewiki users appear to be relatively few, and the technology presents some barriers to widespread use. In order to see Sidewiki comments, a user must install the Google Toolbar and its enhanced features. And a user must also be logged in to a Google account in order to use the Sidewiki functionality.

But being the media giant that it is, Google may have the capacity to bring Sidewiki, and website annotation, into mainstream use. If that happens, online news outlets, along with other websites, may find that the dialog on and about their sites is increasingly controlled by Google. And that could result in some interesting legal issues for all parties.

3 responses to “Will Google Sidewiki Shift Control of Online Comments?”