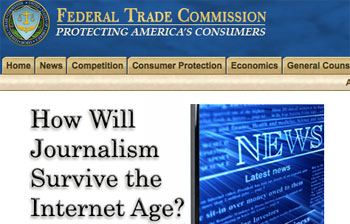 It’s been a busy season for prognosticators who examine the intersection of public policy and media. Today will be particularly hectic for them, as journalists, bloggers, public broadcasters and policy wonks pack into a session at the Federal Trade Commission to ponder, yet again, “How Will Journalism Survive the Internet Age?” (Submit your own thoughts via Twitter here).

Two weeks ago, the Future of News Summit in Minneapolis considered the fate of regional journalism. And throughout 2009, there have been countless closed-door conversations mapping out different scenarios about how policy solutions might help salvage reporting capacity.

For many, be they reporters, citizens or news media moguls, the idea of government-supported media sets off warning bells."

At these events, the public or non-profit model is often presented as an answer. The amount of serious reporting is diminishing, the argument goes, so public broadcasters should rush into the breach. In their much-discussed paper, The Reconstruction of American Journalism, Michael Schudson and Len Downie put it this way:

Public radio and television should be substantially reoriented to provide significant local news reporting in every community served by public stations and their Web sites. This requires urgent action by and reform of the Corporation for Public Broadcasting, increased congressional funding and support for public media news reporting, and changes in mission and leadership for many public stations across the country.

Despite the scope of the challenge, foundations and public broadcasters are taking these calls to action to heart. The CPB and Knight Foundation are teaming up to fund the $3 million Argo Project, which supports local reporting focused on specific topics by journalist-bloggers based at stations. Under the leadership of president and CEO Vivian Schiller, NPR has been making bold plays to build a multi-platform news network that bridges local and national news production.

As someone who is watching this shift of focus, it seems as though the move to increase resources for journalism is less a result of a top-down policy change, and more a matter of internal policy decisions on the part of the many organizations that comprise the public broadcasting system. You could even say it’s something of a grassroots movement, with scattered reporting experiments cropping up at stations around the country.

Of course, any increase in taxpayer dollars for public broadcasting might be earmarked to support even more reporters. But serious policy proposals need to go further. Simply producing additional news doesn’t address the demand side of the issue.

As we’ve been arguing at the Center for Social Media, successful Public Media 2.0 projects must directly convene publics to learn about and tackle shared problems. This means more than just handing out yet another serving of information to a surfeited audience; it’s about engaging users at every phase — planning, funding, production, distribution, conversation, curation, and mobilization — to make sure that all stakeholders’ voices are included. This ensures different perspectives are aired, and that content is interesting, relevant and accurate. As the “Instant White Paper” that was issued after the Future of News Summit noted:

The needs of the audience can no longer be taken for granted, and new and creative efforts must be devised to listen authentically to the public (not in a check-the-box fashion, which CPB President and CEO Patricia Harrison said tends to be the case), and then provide them with quality information that is both enticing and informative. “Draw me in. Engage me. Challenge me,” said longtime public radio consultant and online attendee Israel Smith, “make the radio (or whatever platform) experience as compelling as the journalism. If not, I’ll go somewhere else.” As MPR’s Chris Worthington put it, we need to “listen more to the audience” to understand what the gaps in journalism are we need to fill, and what sort of journalism they will value.

Okay, that’s a start. Listening to audiences is good; partnering with them to solve problems would be even better. But what other policy strategies might support a media system that makes this possible? Here are a few suggestions.

A more responsive, dynamic public media system is already evolving hand-in-hand with the ever-increasing availability of high-speed broadband. The FCC has been calling for its own hearings and public comments to support the creation of a national broadband plan. In response, Center for Social Media fellow Ellen Goodman, who is also a professor at Rutgers University School of Law in Camden, submitted a set of comments that outline how public media could spur broadband adoption.

To allow it to do so effectively, she suggests, Congress will need to take another look at the Public Broadcasting Act. Titled, “Digital Public Media Networks to Advance Broadband And Enrich Connected Communities,” Goodman’s comments offer up a set of new parameters for public media: she argues that it should be accessible, modular, engaging, networked, diverse, innovative, and transparent. Taken together, these new characteristics form the acronym “AMEND-IT” — a provocative suggestion that will raise eyebrows at some traditional public broadcasting institutions.

Media reformers from the Free Press have also been calling for a reboot of public broadcasting legislation. Earlier this month, executive director Josh Silver told Current, the newspaper that serves the public broadcasting sector, that the organization is lobbying the Obama administration to appoint a bi-partisan “high-level, White House-sanctioned commission” to consider “the information needs of citizens in a digitally networked democracy.” This language mirrors that of the recent Knight Commission report, which makes its own pitch for boosting funding to public media.

Candace Clement of Free Press coordinates the organization’s New Public Media campaign. She said that the first step in reinvigorating public media is broadening the definition of the sector.

“For us, public media means non-commercial media that is created by a wide variety of organizations and individuals,” she said. “The traditional conception includes NPR and PBS, but we also include community media, and local or national providers who are providing the media that commercial media won’t.”

She stressed that recent legislative campaigns are focused not only on supporting new forms of media production, but on preserving the capacity of citizens to report via older platforms, such as low-power radio and cable access stations. Such platforms are still quite valuable at the local level, especially for users who haven’t yet made it online, and don’t often see their concerns reflected in large, for-profit media.

Clement ticked off other planks in the New Public Media campaign platform, including changing how public media is funded, taking a more critical look at governance structures, increasing diversity within the sector and the content it produces, and supporting infrastructure and technology improvements that will allow public media makers to stay accessible and relevant.

“We have a system,” she said, “but it needs a lot of changes before it can do the kind of work we need it to do.”

Policy solutions to support journalism are not called out explicitly in the New Public Media campaign, but are a central focus of a related Free Press campaign, Save the News. The organization marshaled more than 2,000 citizens to respond to the FTC’s call for comment for today’s event.

For many, be they reporters, citizens or news media moguls, the idea of government-supported media sets off warning bells. Some worry that federal funding could stifle criticism, generate political conflicts of interest, or at the very least result in what Jeff Jarvis described as boring “broccoli journalism.”

Conservatives like Glenn Beck of Fox News see public media policy reform as a land grab by liberals that — somewhat paradoxically given the increasingly open media ecosystem — could muzzle free speech. Libertarians argue that government should stay out of the news business (along with everything else, thank you very much), likening it to “a welfare system for journalists.” Local communities are wrestling with questions about whether their stations’ top priorities should be news production or civic engagement.

All of this means that, as Richard Gingras, CEO of Salon Media quipped at the Minneapolis summit, for now at least, “The future of news is a future of conferences about the future of news.”

Jessica Clark directs the Future of Public Media project at American University’s Center for Social Media. There, she conducts and commissions research on media for public knowledge and action, and organizes related events like the Beyond Broadcast conference. She is also the co-author of a forthcoming book, “Beyond the Echo Chamber: Reshaping Politics Through Networked Progressive Media,” due out from the New Press in February.