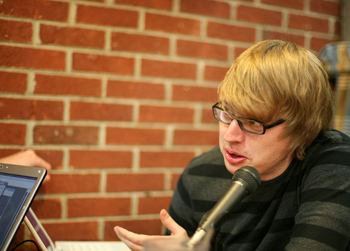 Ken Hawkins, founder of TheDigitel.com, tapes a podcast called the DigiCast at the Lowcountry BBQ Meatup at Momma Brown's BBQ in Mount Pleasant, S.C. in February 2009. Image by Chrys via Flickr.

Many news websites are working to refocus on local news, and often this means turning to automated aggregation. One hyper-local startup in Charleston, S.C., is blending links, community and visuals to try and redefine aggregation by giving it a human context.

TheDigitel.com was launched by Ken Hawkins in June 2008, and recently received its first round of venture capital funding from Palmetto Investments & Exchange Group.

Our aim is to connect, and not to re-report the news."

Hawkins and his team are now deciding where to expand next. In keeping with its community philosophy, TheDigitel has even asked readers to vote for its next destination.

Hawkins spoke about the concept of “context aggregation,” using wikis to engage readers, and other topics shortly after the funding was announced in October 2009. Here’s an edited version of my interview with him.

Can you say how much funding you received?

Hawkins: It’s not huge, but it does give us the momentum to ‘break out’ of the test market in Charleston and start expanding.

Talk about the process of finding your investors. How much control will they have?

Hawkins: The investors were pointed our way through a mutual contact at another
local company, BeliefNetworks. I still retain more than a ‘super majority’ of [TheDigitel]. However the investors bring not only cash but more of a business background, something journalists are often lacking.

Are you hoping to generate revenue from normal online ads or contextual ads? Can you or will you take donations?

Hawkins: Well, the business model at its heart is very familiar: display ads. Obviously that’s a tough market, and we do want to pursue sponsors. It allows us to have a real relationship with the area’s best businesses. Done well, it could help the businesses, the readers, and us. Done poorly, and it would just be bad.

Ultimately I really want this to be a non-profit. We’re not in this to get rich. We want folks to find the best in coverage, be it a local photographer or the local media giant.

Are you an aggregator, or are you a news organization?

Hawkins: All media outlets are aggregators either in whole or in part, depending on how broadly you define aggregation.

Our site engages in a mix of primary reporting about simpler things — ‘Band X is playing at Venue Y’ or breaking crime and traffic news — and a blend of aggregation that I’ll call ‘context aggregation.’ That means we both go digging for media sources used by other media and wire services, and [we are] offering a sort of ‘reporter’s notebook’ about who’s talking about what, and what this means in the broader scheme of things. Those are things our younger audience often doesn’t yet know.

One of the things folks seem to appreciate is that we don’t assume that you’ve read the prior story, so we stitch in relevant back links. In essence, we report on the multitude of reporting. At first, this would seem to add to information overload, but it actually helps by giving the reader more perspective.

So our aim is to connect, and not to re-report the news. Sometimes, this context aggregation is simple, and sometimes it’s much more involved. For example, we just recently did a complicated election roundup with lots of links.

What kind of traffic do you generate?

Hawkins: This month, we served up 57,242 page views, which is about on par with our usual 60,000 a month, and 21,351 visits. Only 11 percent of the traffic comes from Google. Forty percent is direct traffic, 9 percent comes from Twitter, 8 percent from Facebook, and so on.

We’ve developed a highly local market that comes to us directly instead of a Google in-and-out market. Seventy-two percent of visitors are in South Carolina and 53 percent are in the metro area.

You have no Google ads. How do you manage that?

Hawkins: One thing that separates us from most new media ventures is actually being in the community. This not only helps us with community coverage, but also gives life to more standard advertising opportunities and frees us from the low CPM rates of Google.
Ultimately, we also want to develop local ad networks that allow good local bloggers to make some real cash off page views. We have the ad tools.

When did you initially launch, and how long did it take you to prepare?

Hawkins: We spent months planning the launch on paper (I’ll say four months of casual conversation, and two of real planning). And then we spent about two months to build the Drupal-based site, which has been an ever-evolving design.

How large is your staff, and how many community contributors do you have?

Hawkins: We’re a group of three staffers writing, with about 20 occasional community contributors.

Tell us a little bit about your staffers. Does anyone ever take a vacation?

Hawkins: I’ll focus on the two that are in it for the long haul. Amanda Click was a marketing intern who stayed with us. We aim her mainly towards the soft news that is often so important to communities. She’s been with us nearly a year, and carries the food, entertainment and features beats. She’s 22.

I have more of the traditional news background, having been in papers for eight years, most recently at The Post and Courier in Charleston. I came from an infographics background and consider myself an information designer. It’s something that drove me to create the site. I’m 29.

No vacations yet. But we hope someday.

Talk about your strategy of asking Twitter users and online readers to vote on your next city. What kind of response have you had? Which cities are you considering?

Hawkins: We had about 100 responses through just two plugs on our Twitter account. We’re hoping that this will be somewhat viral, with passionate [people in different] cities getting behind the idea. We’ll eventually plug the campaign from our site and talk directly to other bloggers, but it will be a process. Right now, Charlotte has taken a dominating lead of nearly 5-to-1.

Do you have any plans to increase capacity for traditional journalism, with deeper stories and paid reporters and editors?

Hawkins: To do more ‘traditional local journalism’ is not our end goal. It’s our belief that there’s plenty of it out there, from traditional and non-traditional sources, but that folks have a hard time finding and understanding it. That said, if a reporting doomsday does come, we’re laying the foundation to be able to do traditional reporting tasks.

Your photo credits link to sources on Flickr. How much time does photo-mining take? Do you consult with Flickr users first? What kind of responses have you had from the photographers?

Hawkins: We feel it best to link to Flickr photo pages to get the photographer more exposure. We also feel this is most fair to the reader, who would probably want to see more photos.

It’s a fairly non-painful process to mine, taking about five minutes on average. We normally don’t pre-consult. But thus far we’ve received nothing but thanks for our usage of photos, particularly in the local circle.

Your open community feature allows almost a wiki-like interface. Can all your content be edited by anyone who signs up? Has that ever created problems?

Hawkins: It basically is a wiki with a gatekeeper. An editor reviews changes before they go live, and it’s only been a good thing. We get all types of contributors, from typo fixers to writers of full stories.

A big inspiration for the workflow and cost-saving necessity of this was a piece by Information Architects.

What kind of challenges have you faced?

Hawkins: Our most interesting challenge has been demonstrating how we are not a pure aggregator. For so long, the online field has been [filled with] just three types of players: blogs, traditional media, and aggregators. So it seems the natural assumption is for folks to think: ‘Which of the three are they?’ As I said, we’re a blend, which gives context. In six months to a year, I think it will be all the rage.

Andria Krewson is a freelance journalist and consultant from Charlotte, N.C. She has worked at newspapers for 27 years, focusing on design and editing of community niche publications. She blogs for her neighborhood at Under Oak, writes occasionally as a Tar Heel mom at The Daily Tar Heel and covers changing culture at Crossroads Charlotte. Twitter: underoak.