Does Gawker’s Publication of McSteamy Sex Tape Constitute Fair Use? 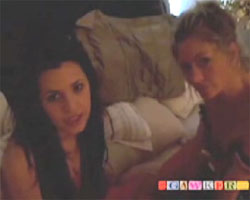 A scene from the McSteamy sex video, as published by Gawker

Editor’s Note: new information was appended to this article on Dec. 15.

It probably seemed like a fun idea at the time.

Given Dane’s popularity on the show, it was almost a forgone conclusion that the tape would somehow make its way onto the Internet, and Gawker was happy to make it happen. It published the video in August, and has since racked up over 3.25 million page views.

Hollywood sex tapes making their way to the Internet are nothing new. It has happened to Paris Hilton, Tonya Harding, and, of course, Pamela Anderson and Tommy Lee.

While lawsuits almost always follow leaked sex tapes, few cases ever go to trial. (Paris Hilton’s suit, for example, ended in a settlement that reportedly made the heiress $400,000.) Dane and Gayheart’s suit, which was filed three weeks ago in a California federal court, is surprisingly not about invasion of privacy or defamation of character, as is common when a sex tape goes public. Instead, the couple claim that Gawker’s publication of the video violates their copyright. This makes it a unique situation.

I recently described for a friend what the video did and didn’t show, and explained that as long as Gawker didn’t help steal the tape, it does not matter how they got it. After my 15-minute soliloquy, she asked, “So, who will win?”

“I give Gawker a three-point spread,” I said.

Here’s how the case of McSteamy V. Gawker breaks down, along with a look at the larger legal issues at play.

Does a Sex Tape Fall Under Fair Use?

In 1976, Congress enacted the Copyright Act, which states that a copyright holder has the exclusive right to distribute or reproduce copyrighted material. However, the law includes one big exception, which is called “fair use.” Section 107 of the Copyright Act states that a person or business can publish portions of copyrighted material so long as it is for the purposes of criticism, comment, or news reporting.

Gaby Darbyshire, a barrister and the vice president for Gawker Media, told me that the company published the video because it was “newsworthy.” But simply labeling something as news doesn’t automatically constitute “fair use.” In order to determine whether Gawker deserves the law’s exception, a court will look at four factors listed in Section 107.

First, a court will look at whether Gawker used the video for commercial purposes. Obviously, Gawker is a for-profit business, but that alone doesn’t prevent it from publishing the video.

Instead, a court will consider the purpose and character of Gawker’s use of the video. The question here is whether the website posted Dane and Gayheart’s video for news or commercial purposes. If Gawker edited the tape to suit a newsworthy purpose, the website would have given the video a meaning different than that of the original, thus making “fair use” appropriate.

Here’s the argument that Gawker will likely make: Dane, Gayheart, and Peniche made the tape because they wanted to record sexual acts. According to Darbyshire, however, Gawker posted the tape because they found some news value in the recording. Darbyshire said that seeing “Dane, his wife, and a former beauty queen who went on a reality show to be treated for sex addiction, and reportedly is a Hollywood madam,” together is newsworthy. Thus, Gawker will claim that its use of the video added a news element to a home movie.

David Ludwig, an intellectual property attorney for the law firm Dunlap, Grubb & Weaver, agrees with Darbyshire. “Newsworthiness does not limit itself to hard news, it can involve celebrities as well,” he said.

As a result you can probably score a point for Gawker on this issue.

Second, a court will examine whether Dane’s tape was published or unpublished at the time of Gawker’s use. In terms of “fair use,” the law states that “the fact that a work is unpublished shall not itself bar a finding of fair use.” However, “scooping” a copyright holder on their work does make the “fair use” exception less likely. In a 1985 decision, the Supreme Court stated that a copyright holder has the “right to control the first public appearance” of copyrighted material. Gawker’s post was the first time the public had ever seen the video, meaning that Gawker does not have much of an argument here. Call it McSteamy 1, Gawker 1.

Third, a court will look at the “amount and substantiality” of Gawker’s posting in relation to the video as a whole. Gawker posted just under four minutes of the 12-minute tape. As far as the law is concerned, the posting’s length may critically compromise Gawker’s claim to “fair use.”

In 1987, the Second Circuit Court of Appeals held, for a variety of reasons, that appropriating one-third of 17 letters written by author J.D. Salinger did not constitute “fair use” because it was more than “necessary to disseminate the facts.” Ludwig suggested that Gawker could have legally posted a screen-shot or a snippet of the video to prove that their story was true. Instead, they excerpted a third of the video. Dane 2, Gawker 1.

Fourth, a court will ask whether Gawker’s publication of the video supplanted the need for an individual to purchase a legitimate copy of the couple’s tape. This depends on what material Gawker left on the cutting room floor.

Fair Use Versus Infringement

To recap, Dane and Gayheart appear to have a valid claim against Gawker for copyright infringement. However, Gawker has a formidable defense by way of the “fair use” exception. It’s important to note that the four factors outlined above are not examined in isolation of one another. Instead, courts try to balance them against each other.

In the end, if this case goes to trial, the outcome will likely depend on what Gawker chose to cut from the video. It’s a strange reality that, in the case of sex tapes, what a news organization doesn’t publish is sometimes more important that what it does.

Update Dec. 15: California district court judge George H. Wu has ruled that Dane and Gayheart may not recover attorney’s fees or statutory damages as part of their lawsuit. Section 504 of the Copyright Act states that, in some cases, a copyright violation could come with a penalty as high as $150,000. However, Wu held that since the couple registered for a copyright on the tape after Gawker had posted it online, these statutory damages are not recoverable. Gawker first posted the tape on August 17; Dane registered for a copyright two days later.

This recent development in the case is not the end of Dane’s suit. While statutory damages may no longer be available, the couple could still be awarded actual damages if the court rules that Gawker’s use of the tape did not constitute fair use.

9 responses to “Does Gawker’s Publication of McSteamy Sex Tape Constitute Fair Use?”