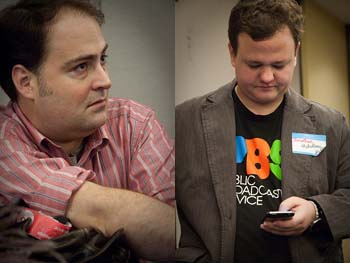 “Public Broadcasting has a future and its all about YOU,” tweeted Jonathan Coffman at the close of this weekend’s bustling Public Media Camp.

Coffman, the product manager for PBS Engage, was a key organizer of the event, along with Andy Carvin, a senior strategist at NPR’s Social Media Desk, and Joe and Peter Corbett, two brothers who run iStrategy Labs, a “digital word of mouth agency.” American University’s Center for Social Media, where I work, served as the host of the event.

"Public broadcasting needs to think of itself as an open source community." - Shane Guiter

But while the organizers did present over the course of PubCamp’s two days, the bulk of planning was left up to the 250-plus attendees. They spent each morning honing topics for dozens of sessions, from “Getting Seniors and Underserved Communities Online,” to “What the Heck is Drupal & Why Should We Care?” to “Epic #Fail,” which surveyed a range of new media projects that had dramatically tanked.

This unconference format, which creates a “blank slate” for attendees to identify shared issues, projects and learning opportunities, wasn’t the only unusual feature of the PubCamp. This represented a new approach to problem-solving in this sector.

Public broadcasting as a whole has been slow to adapt to the participatory media environment (after all, Time magazine declared “you” the Person of the Year way back in ’06). As a sign of the changing times, all three of the 10-ton gorillas — PBS, NPR, and the Corporation for Public Broadcasting — supported and endorsed this event. CPB also underwrote scholarships for attendees from 10 stations who promised to hold their own local PubCamps in the coming months.

“The year everything changed”

“People will remember 2009 as the year everything changed,” predicted NPR CEO Vivian Schiller in her opening remarks, fresh from the previous week’s NPR Digital Think-In.

Of course, top-down attitudes still creep back in from the leaders of outlets better known for producing trusted broadcasts than Wikipedia-style collaboration. At an “unpanel” moderated by MediaShift’s Mark Glaser, both John Boland and Jason Seiken of PBS faced tough questions about their arms-length attitudes toward user-generated content. This theme was picked up in a parallel session on the relationship between citizen and professional journalists. As attendee Jessie Newburn noted, this conversation revealed changing generational dynamics:

When the blogger said emphatically to the well-paid, entrenched traditional media lady who was assuming that a blogger would want to volunteer under her organization’s terms of providing content, ‘We don’t want to volunteer for you. We want to be in partnership with you.’ I knew then that the tides had shifted…GenXers have moved away from asking for attention and respect, vis-a-vis their ideas/visions/Web 2.0 activity and new problem-solving and are moving on, with or without the institutions.

This can-do vibe animated PubCamp’s sometimes chaotic and often lively sessions. Freed from the doldrums that drag down so many traditional journalism and public broadcasting conferences, innovators from across the country sat down with like-minded techies and public media enthusiasts to discuss what’s working, what’s needed, and what to do next.

Several of the emerging projects discussed at PubCamp demonstrate the sort of cross-system, cross-platform thinking that can help transform public broadcasting into Public Media 2.0:

“The big thought I came away from PubCamp with was that [public broadcasting] needs to think of itself as an open source community, and begin to work like that,” blogged Shane Guiter, who fundraises for PBS in Austin. “Why should we all spend tens of thousands of hours working on the same issues separately?”

Generating new tools, models and volunteers for under-resourced local stations can’t happen soon enough. Just this week yet another report, The Reconstruction of American Journalism, pegged public broadcasting as an important part of the solution to the news crisis.

If the local PubCamps proceed as promised, you will have an opportunity to help. Stations in Ohio, Georgia, North Carolina, Texas, Mississippi and Florida have already begun planning their camps.

The guide for future events stressed the “10 Principles of PublicMediaCamps,” including, “It’s all about strengthening public media through collaboration with the public” and “there is no audience, only participants.”

Photos of attendees and Vivian Schiller by Mark Glaser. Photo of PubCamp schedule board via Shane Guiter

Jessica Clark directs the Future of Public Media project at American University’s Center for Social Media. There, she conducts and commissions research on media for public knowledge and action, and organizes related events like the Beyond Broadcast conference. She is also the co-author of a forthcoming book, “Beyond the Echo Chamber: Reshaping Politics Through Networked Progressive Media,” due out from the New Press in December 2009.