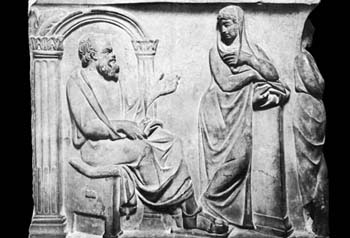 Can the Socratic method provide a model for online conversation?

How can you unlock the creativity and insights of your community? Well, you can give community members a blank canvas and hope they are inspired to paint it with ideas and contributions. You can also provide them with access to experts such as journalists or external sources for chats, discussions and other interactions. Both methods have their merits, but they often block the creativity of a community. I’d like to present a third way, which is inspired by the Socratic method.

First, let me discuss some of the advantages and drawbacks of the first two methods. The “empty canvas,” which could include hosting an unmoderated forum, often leads to chaos and unpleasant power struggles. On the other hand, you might end up being amazed by the self-organization and creativity of your community. They could take full advantage of the freedom being offered. Of course, most media sites are not a total blank canvas in that they offer articles, pictures and videos, so there is some guidance.

These chats and comments on the site are very important tools in helping the newsroom decide which stories to cover."

The other model, what I’ll call the “highly-structured” option, risks creating passivity within the community. People have to rely on your organization to invite the mayor, the prime minister or a sports hero and then offer a way for people to ask them questions. These questions are heavily moderated so there is no direct interaction. On the positive side, this model can elicit some valuable exchanges.

I believe there is a “third way” that can supplement these other methods. Basically, it is a methodology for a type of online conversation, a kind of critical collaborative thinking. I call this method “Socratic,” even though my use of the term is a wild variation on what is classically described as the Socratic method.

In my interpretation, Socrates, the ancient Greek philosopher, helped his conversation partners by asking questions. These questions unlocked the wisdom in other people, or helped them to disentangle confused thoughts. I am no Socrates, but I think that asking open questions and refraining from telling the story yourself can be an interesting way to have a group discussion. It’s also a way to help create a valuable, active community.

I have been testing this new method as part of my role as the person in charge of new media at Mediafin, a Belgian newspaper publisher. I recently convened an online meeting using CoverItLive, a live-blogging tool. I invited members of our community to join me for a discussion about a specific topic. There would be no experts on hand — just me and the people who logged on. I suggested that we discuss whether the first signs of an improving economy are an indication of full recovery?

I gave a brief introduction to the topic and invited people to give their personal take on the issues. My questions were very open and broad: what are the important leading indicators of a recovery? How is our region positioned to benefit from an eventual recovery? What are our strong and weak points?

I refrained as much as I could from giving my own take on the issues, though I sometimes failed. I mainly asked specific participants to elaborate or clarify their thoughts. My role was that of the facilitator, the person attempting to bring more out of each participant.

That was a very good question. Journalists in general are very focused on what key sources and experts think, and what the competition writes and says. They have less experience using conversations with members of an online community in their work.

However, this is rapidly changing within our organization because of the many comments we get on a daily basis on our site, and because of the live sessions. Journalists are starting to see the value.

As a result, I told the community that, yes, my colleagues are interested in the opinions expressed during the chat. I explained that these chats and comments on the site are very important tools in helping the newsroom decide which stories to cover. It also helps us determine which aspects of a developing story are most important to our community.

I admit that my description of the Socratic conversation may be a bit idealized, as the discussion itself was choppy at times and not everything went smoothly. However, people did respond energetically. There were tons of comments and the discussion was very fast-paced (some complained it was too fast). I was left with the feeling that this format liberated a lot of energy and knowledge. With that in mind, let me try and codify how other communities can incorporate the Socratic conversation into their activities.

Seven rules for a Socratic conversation

1. Avoid the blank canvas. Suggest a subject, and explain to people how the format works. Tell them that they, rather than an expert or journalist, are at the center of the exchange. It’s important to explain this well because people are not used to this conversational style and don’t know what to expect.

2. Offer some background. This can include links for recommended reading or other suggested resources. It is also a good idea to give a brief introduction before starting out — not everyone will have read or looked at your background!

4. Get specific. As the conversation progresses, you can ask people to focus on specific points from the first round. Also, don’t be afraid to delay some points for a future conversation — just make sure you tell participants what you’re doing.

5. Look at pros and cons. As you focus on specific issues, look for weak and strong points in various arguments and bring them to everyone’s attention in a constructive way.

6. Ask group for clarity. Also look for particularly interesting or confusing statements, and invite participants to elaborate or clarify. You can also invite the group to help, if necessary.

7. Summarize what you learned. Try to summarize what was learned during the session, making the achievements of the group as concrete as possible. Explain how the results will be used for a subsequent article or project.

This kind of synchronous meeting can help you identify new “opinion leaders” in your community, and do it in real-time as opposed to reading through comments and forum messages.

I also found that this structure encourages new people to speak out — people who might have been reluctant to engage in other forms of discussion. After testing this out with the community on our websites, it’s clear to me that anyone looking to achieve community engagement should consider the “Socratic conversation.”

*****
If you have any insights that can help improve this conversation style, please let me know in the comments.