Why Do Some College Newspapers Still Have No Web Presence? 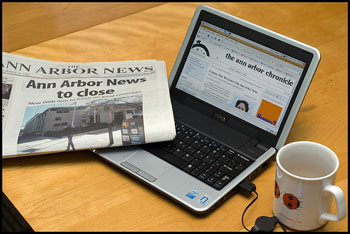 Summer’s almost over and college newspapers across the country will be cranking up to full speed soon. Likely, they’ll be getting ready for further adventures in online journalism, expanding their online presence while attempting to keep the print product financially successful.

But hard as it is to believe, there are still student newspapers around the country that have no online presence at all. At the Associated Collegiate Press Summer Workshops recently, I asked for a show of hands from students whose newspapers didn’t have websites. In two sessions, several hands were raised.

It still surprises me that any school newspaper would be without an online presence in this day and age."

I won’t say which schools these students represent, but I’ve come across the phenomenon in other presentations over the years as well. And it still surprises me that any school newspaper would be without an online presence in this day and age.

[update 8-12-09: per the comments, Bob Bergland notes a survey he conducted: “We were amazed to find that 36% of the 392 papers analyzed (random sample from the ~1,600 on the E&P directory) did not have a web presence (defined as no site, a site with no content listed as being under construction or a site which had not been updated in over six months).”]

There are two primary obstacles for getting a college newspaper online: One is relatively easy to overcome (technology), the other much harder but more crucial overall (institutional).

I spoke to one student who was working to bring the college newspaper online at a school in the Southeast U.S. This student had a lot of questions about content management systems: Which one is best? How difficult are they to install and maintain?

Honestly, the technical issue is one that can be overcome in an instant if you just want to get started. There are two fine weblog publishing platforms (out of many) which can provide a college newspaper with a place to put content online: Blogger and WordPress.com. Both will allow students to experience the joys of a content management system and putting content online. If you’ve got no budget and no technical help, this is the easiest way to get online now.

If you want a turn-key content management system with your own domain name and ability to control some of the advertising, there’s College Media Network (CMN), which will keep the back-end running while young journalists focus on the content. Some would complain about some of CMN’s advertising, but I’ve never had a problem working with the network to remove ads that, for example, might offend sensitive sensibilities on a religious campus.

A more important obstacle for some schools that still don’t have an online presence is the institutional one. When I started advising, I worked at a private college that was affiliated with a religious denomination. We had an online site when I got there in 2001, but there are still private religious institutions that keep their student newspapers from publishing online.

I have heard several justifications for this reticence, but they are all, at heart, about protecting the image of the university or college.

Make no mistake, college news is a messy business. Students are learning, and their mistakes all too often show up in print. An online presence will broadcast those mistakes to the world, so the theory goes. Also, a college that supports student press freedoms when distributed to 2,000 people on campus might not be so keen to distribute “bad news” about the campus when the whole world is watching.

There’s also the trouble with donors. When I was advising at a private school, we got several comments from donors who were outraged at some of the advertising that showed up on our student newspaper site. Personally, I thought these complaints were overblown, but I’m not in charge of development. We walked a fine line in those discussions. My argument to donors would be this: Do you want this to be a respected institution, or a backwater for propagating nonsense? If the former, then push to get students online. If the latter, then stay offline and wither.

A disservice to future journalists

A college that will not allow their student journalists to practice online journalism in a “real world” setting is abandoning its commitment to education in order to save face. And that is a tragedy not only for the college, but for the students who look to higher education to prepare them for the future.

Is your school keeping you from pressing forward in online news? Drop a comment, even anonymously. This is truly the last frontier for online journalism. Let’s see if we can pull together to get all student newspapers online.

Bryan Murley is assistant professor of new and emerging media at Eastern Illinois University, where he advises DENnews.com, the Pacemaker-winning online site for the student newspaper. He is also the director for innovation at the Center for Innovation in College Media, where he leads the weblog Innovation in College Media. He is the college media correspondent for MediaShift.

7 responses to “Why Do Some College Newspapers Still Have No Web Presence?”