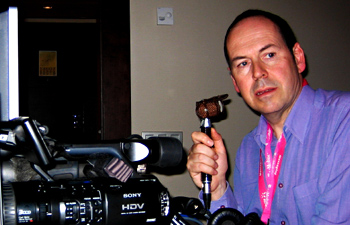 The BBC's Rory Cellan-Jones says he has been "forced to reinvent" himself. Photo by "Rorycellan":http://www.flickr.com/photos/rorycellan/ via Flickr Creative Comons.

With a new Web 2.0 service apparently springing up every week, it can be bewildering for a journalist trying to remain relevant in a digital age. Too often, new technology is seen as a burden that adds to an already packed workday. But while many journalists want to embrace new ways of reaching audiences, they flounder when it comes to knowing what to do — thinking of new media as something they can do “in addition to” traditional journalism, rather than as something that should transform the way journalism is done.

This came up during a panel at the Canadian Association of Journalists annual conference discussing the future of journalism, where I talked about the need to adopt a multimedia mindset and change the way we think about journalism, explaining our approach at the UBC Graduate School of Journalism.

Journalists will need changed culture, changed organization and an improved understanding of the modern tools of journalism.

During the Q&A part, a beat reporter spoke with clear angst about the increasing pressure she was facing. During the course of an average workday, she wrote two or three stories. In the past, she had tried her hand at blogging, video, Twitter and other multimedia efforts. What she wanted to know was: In addition to her existing job writing straight news stories, what was the one thing she should be doing?

Judging from the reaction in the room, this was a question on the mind of more than one journalist. But I am afraid that my answer may have disappointed. Instead of conjuring the magical one thing she should add to her journalistic bag of tricks, I suggested that this was the wrong question.

The question assumes that journalists can carry on with business as usual, and simply add an additional task to what they do. If only it were that simple. But there is no one digital trick to be added to a reporter’s notebook. Rather, the social, cultural and economic changes brought about by the emergence of new digital forms of communication require a rethink in the mindset and culture of journalism.

My answer to the beat reporter was that she should reassess what she does to figure out how she can best serve the audience. It could be that writing two or three stories a day is the answer. Or blogging may provide a way to develop a closer relationship with that audience. The digital revolution is less about adding multimedia tricks than it is about reinventing the role of the journalist.

Take BBC technology correspondent Rory Cellan-Jones, for example. I worked with Cellan-Jones at the BBC when he was a business TV correspondent. He has been with the BBC for 25 years but, over the past few years, he has been reborn as something more — a journalist. Cellan-Jones no longer sees himself as just a TV reporter, but rather as a journalist with audiences on TV, radio and online.

Speaking on a panel organized by The Guardian’s MediaTalk podcast, he described the impact of the reorganization of BBC News as a multimedia news operation, rather than in silos of TV, radio and online:

It has forced me to reinvent myself. I spent most of my career as a daily TV journalist serving big audiences on lunchtime news bulletins and having very little engagement with the audience. I’ve got a much more rewarding job now serving audiences online, on radio, on TV, at the same time, and having far more engagement through all these social networking tools.

Cellan-Jones now contributes to the BBC’s technology blog and has experimented with mobile blogging. On Twitter, he has more than 10,000 followers and engages with them on anything from the latest hype in technology to his passion for cricket. And, of course, he reports for TV and radio. For him, the Internet is not an add-on to his broadcast job. Rather, he has reinvented his job to take account of the shifts in journalism and, as a result, has found it a far more fulfilling profession.

The basic qualities of a good journalist — curiosity, passion, accuracy, serving the public interest — still matter. To thrive today, journalists need to figure out how they can best apply those qualities in a multimedia, networked news environment. This requires journalists to look beyond the walls of their institutional practices, beyond what the BBC’s Peter Horrocks labeled “fortress journalism” in a chapter for a book by the BBC College of Journalism entitled The Future of Journalism, available online for free as a PDF file.

Horrocks led the integration of the BBC’s TV, radio and online news into one multimedia newsroom from 2005-2009. In his chapter, he outlined his vision of the role of the journalist:

Journalists will need changed culture, changed organization and an improved understanding of the modern tools of journalism — audience insights, blogging, Twitter, multimedia production. It sounds like being pretty challenging. It’s certainly more complex than the old fortress world — of riding out to fight the enemy to the death every day. But I suspect that the public may well appreciate a journalism that puts serving their information needs at its heart, rather than one which is about organizing the world in the way that journalists prefer.

Wholesale rethinking on this scale is much harder than adding a new skill to an existing arsenal of journalistic weapons. It involves breaking down the mental walls of silo journalism that have developed over decades. But it can be done, and should be done, to deliver a journalism that serves the public in a digital age.