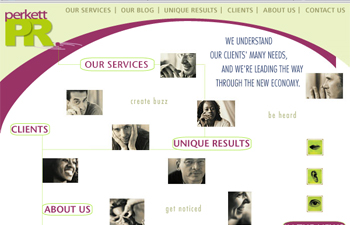 PerkettPR is one public relations company that has worked to identify and approach big influencers in the blogosphere.

Many PR agencies are hesitant to issue any guarantees on whether a particular piece of content or advertisement will “go viral,” leading millions of users to toss it around through their various social media platforms. One way that they try to achieve this is by approaching the people often most responsible for the viral spread of content online — big-name bloggers and popular social media users.

A recent piece in the New York Times detailed how PR agencies in Silicon Valley get their clients’ news in front of the key influencers who drive stories within the entire blogosphere. In one scene in the article, a publicist named Brooke Hammerling discusses how she plans to get placements for a particular client:

Instead, she decides that she will ‘whisper in the ears’ of Silicon Valley’s Who’s Who — the entrepreneurs behind tech’s hottest startups, including Jay Adelson, the chief executive of Digg; Biz Stone, co-founder of Twitter; and Jason Calacanis, the founder of Mahalo.

But how do these PR professionals identify the Who’s Who in their clients’ niches? And once they’ve identified them, how do they approach them for coverage? With nearly every major and minor industry spending more money on social media strategies, publicity professionals are scrambling to locate and develop relationships with those who they think will have the most influence in a particular field. But in a world with millions of active blogs, Twitter accounts, and social news users, how do they break through the noise to identify and persuade the key players?

Jonathan Trenn, a consultant for Abraham Harrison, a digital marketing company in the DC area, said that if he’s starting from scratch with a client he’ll use free tools like blog search engine Technorati to locate the bloggers he wants to contact. Specifically, he searches for the tags that the bloggers use with their posts, because this is an indicator of whether the person writes regularly on a particular subject.

“It’ll give you a list of blogs to look at,” he told me. “You basically start clicking through, and it’s essential that you read the blog and get to know it a bit, maybe start categorizing it or put it in a database. But essentially you want to get to know what they are about, see if they’re updated frequently.”

Technorati and other search tools allow him to then rank the blogs by authority. He said he begins with focusing on the most influential blogs. But he hastened to add that this is only a starting point, and that he can then begin clicking through these blogs’ blogrolls or even approach the bloggers directly to ask them for more recommendations.

“Late last year I was doing some work with a company called ooVoo,” he said. “They’re a competitor to Skype, only they use video. They can have six screens at once…We came up with the idea of having a ‘political day.’ We reached out to prominent political bloggers to essentially hold their own chats for a day, or a series of days. With that I wanted to make it diverse, from political philosophy to demographic, so I reached out to different types of blogs. I asked them who else I should contact. We had 15 to 18 bloggers — left, center, right, African American, Latino, what have you — and they each had their own sessions.”

Adam Ritchie, who works in brand promotion in Boston, takes a slightly different approach in deciding whom to target. He begins by identifying the competitors and other players in his clients’ industries — meaning people such as CEOs and publicity spokespersons. He then runs their names through news and blog searches to find which journalists and bloggers are already writing about them.

“So what you get from this is a list of outlets and actual articles; the writers who are writing them who are your most relevant targets because they’re already engaged in writing about that space,” he told me. “And by doing this you’ve already answered the question, ‘Why would you care?’ If you’re starting a hardware store in DC, you would look at who’s writing about Home Depot and Lowe’s, because whoever is writing about them is writing about hardware.”

When approaching bloggers, he said that he typically starts with blogs run by traditional media outlets, because these are “written by trained, seasoned reporters who usually know how to work the communications path” and who are “paid to produce good content.” He then focuses on what he calls the “indie bloggers,” whom he rates by quality of writing, frequency of updates, and how entrenched they are in other social media like Twitter and Facebook.

“For me, it’s completely qualitative,” he explained. “I want to see what they’re writing about, rather than which of them has the biggest reach in terms of eyeballs. Which of them would tell the most robust stories about this piece of news? And that’s what I care about the most. Because if it’s really good, then the bigger ones will pick it up.”

Ritchie explained that in the old PR world, the agency would simply place the news in traditional outlets and be done with it. But with the new model, once you’ve placed the story, you’ve opened a new phase of work — and that’s when the social media part begins. You then take that news story from a trusted outlet and begin trying to spread it into the blogosphere and social news sites, drawing more eyeballs to it than the publication’s typical audience.

But how do they approach these bloggers and social media users? Almost everyone I spoke to for this piece immediately agreed that most bloggers think very differently than traditional journalists; they tend to shy away from the old methods that PR people have in the past used to engage reporters. Ritchie said that he hasn’t sent out a press release in years, going so far as to say, “I don’t believe in press releases.”

Ritchie said that he sends a personal note with a “buffet of options” for the blogger — whether it’s a YouTube clip, a mainstream press article, or even an original scoop — so that he or she can choose how to engage the story.

Christine Perkett, president and founder of PerkettPR, said that bloggers often differ from journalists in that they aren’t writing about these subjects as a full-time job, meaning they will approach the story differently than would a reporter.

“I think for a lot of the niche bloggers, it’s like a second job for them so they don’t have as much time as a reporter would have to dedicate to that kind of approach,” she explained. “They don’t really regurgitate press releases, and I would say for the most part the consumer bloggers and niche bloggers have been really great; they give their opinion on the news, and that’s really what they do. I think they do write up their own take on it, but they don’t necessarily need an interview to go along with that, or they’re satisfied talking to the PR person.”

So while she might try to get an interview with a client’s CEO for a regular reporter, many bloggers aren’t really interested in that sort of thing. So she said it’s better to hand them something that’s easy for them to splice into a post, like a link to an already-written article that they can summarize and offer their own take.

One thing that PR professionals have found within social media is a tendency for badly run campaigns to backfire. If a journalist receives a bad pitch or poorly targeted press release, he’ll often just ignore it. But it’s not uncommon for a blogger to publish the press release or email on his blog, ridiculing the person or agency that sent it to him. But Perkett told me she thinks this is a good thing.

“They’ve got to be more careful,” she said,“but you know what? It’s OK, because it’s making the PR industry better. Maybe bloggers are beating us into being a better industry, because one of the traditional problems with PR agencies, and especially large PR agencies, is the whole smile-and-dial thing. Not really researching or paying attention to what writers are writing, or what bloggers are blogging, and just using the same pitch over and over. It takes time to do it the right way, and that doesn’t make a lot of money for the large firms. That’s unfortunate, but we’re being forced to change and I think it’s making us better.”