Changing the Law to Save Newspapers: Some Modest Proposals 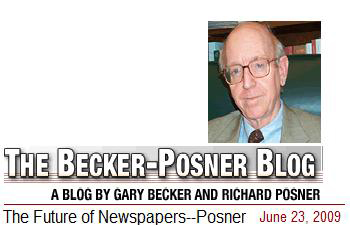 As newsroom staffs continue to shrink and newspapers go out of business at an alarming rate, the difficulty newspapers have experienced in gaining economic traction online has been blamed on blogs and websites that link to content on newspaper sites. According to some, this kind of “free riding” is responsible at least in part for the distress in which newspapers find themselves. A number of proposals have surfaced, in the U.S. and abroad, to change the law to “even the playing field” between new media and old.

It is perhaps ironic that one of the proposals to change the law to benefit newspapers comes from a judge who happens to blog. Judge Richard Posner of the U.S. Court of Appeals for the Seventh Circuit is also a professor at the University of Chicago Law School and a brilliant and prolific scholar. When Judge Posner speaks, people listen. And recently, when Judge Posner spoke, or rather, blogged, on the subject of the future of newspapers and what should be done about it, people not only listened, they talked back — loudly.

In a June 23 blog post entitled “The Future of Newspapers,” Judge Posner looked at the state of the newspaper business. True to his membership in the law and economics school of legal thought, he focused on the economic factors behind the current distress, suggesting that competition from free online news outlets is forcing newspapers into a spiral of decline. Newspapers are slashing staff to cut costs in response to shrinking advertising revenues, thereby damaging the quality of their content and further depressing demand.

Judge Posner suggested that the solution to the problem as he outlined it may be to change copyright law to prohibit linking to or paraphrasing newspaper content:

Expanding copyright law to bar online access to copyrighted materials without the copyright holder’s consent, or to bar linking to or paraphrasing copyrighted materials without the copyright holder’s consent, might be necessary to keep free riding on content financed by online newspapers from so impairing the incentive to create costly newsgathering operations that news services like Reuters and the Associated Press would become the only professional, non-governmental sources of news and opinion.

Those are the last sentences in the post, and Judge Posner doesn’t elaborate further on the issues that his suggestion poses. As commentator Eric Schonfeld noted, Judge Posner’s post does not address the issue of “fair use” or the related First Amendment issues that would be implicated by such an expansion. Although the doctrine of fair use is embodied in the federal copyright statute, it is well recognized that free speech limitations on state regulation underpin the doctrine. See, for example, Harper & Row v. Nation Enterprises, 471 U.S. 539 (1985). It is not clear how much, if at all, the statutory definition of fair use could be trimmed without running afoul of the First Amendment.

Schonfeld describes Judge Posner’s suggestion as “misguided,” and other online commentators have piled on, variously characterizing it as bizarre, extreme, unpragmatic and just plain bad.

At the moment, Judge Posner’s suggestion is merely that — a suggestion. But at least one proposal has made it into legislative form.

In May, Senator John Kerry convened a hearing on the future of journalism before the Senate Subcommittee on Communications, Technology, and the Internet.

Among other presenters, Arianna Huffington, co-founder and editor in chief of the Huffington Post, defended her enterprise and news aggregators generally. She argued that restricting access to content is the wrong approach for traditional news outlets and that news aggregators are not the sole cause of newspapers’ economic problems. Her solution is new revenue models.

“The great upheaval the news industry is going through is the result of a perfect storm of transformative technology, the advent of Craigslist, generational shifts in the way people find and consume news, and the dire impact the economic crisis has had on advertising,” she testified at the conference. “And there is no question that, as the industry moves forward and we figure out the new rules of the road, there will be — and needs to be — a great deal of experimentation with new revenue models.”

Among the topics of discussion was a proposal by Sen. Ben Cardin for legislation that would allow newspapers to transition to non-profit entities, thereby qualifying them for exemption from certain taxes. The catch is that, as non-profits, newspapers would have to refrain from endorsing political candidates. His proposal is pending as S. 673 (111th Cong., 1st Sess. 2009); it has been referred to a committee and no further action has been taken on the bill since its introduction in March.

A proposal by a pair of Washington attorneys to address the problems of newspapers would go further than either the Posner or Cardin proposals, at least in terms of scope. Bruce W. Sanford and Bruce D. Brown echoed Judge Posner’s concern about the survival of traditional journalism in a May article in the Washington Post. In Laws That Could Save Journalism, they opined that unless Congress makes changes in public policy “we will soon find ourselves with the remnants of a broken industry incapable of providing the knowledge necessary to manage life in a complex world.” To fairly place that statement and their proposals in context, it should be noted that both attorneys are former journalists with extensive experience representing traditional media clients, and Sanford is counsel to the Society of Professional Journalists.

Sanford and Brown also propose a change in copyright law, to prohibit “the taking of entire web pages by search engines.” Like Judge Posner, they don’t elaborate on that point, but presumably they are referring to the fact that when search engines “crawl” websites, they copy entire web pages to their servers in order to index the contents and provide results in response to web searches.

Search engine crawling and copying can, in most cases, be inhibited by deploying a “robots.txt” file on the content owner’s server containing directions as to what may be crawled and copied. Most search engines respect the directions set forth in a robots.txt file.

Two federal district courts have held that a content owner’s failure to deploy such a file gives rise to an “implied license,” effectively permitting the owner’s content to be crawled, copied and cached without giving rise to a claim of copyright infringement. But protecting content by the deployment of a robots.txt file is a double-edged sword, as online users are less likely to find newspaper content that is not indexed by search engines, as Sanford and Brown point out.

Echoing some of the proposals outlined at the Kerry hearings, Sanford and Brown also propose that regulatory restrictions on the ownership of media outlets be eliminated, that federal tax policy be changed to favor newspapers, and that antitrust law be changed to permit traditional news outlets to adopt collective pricing policies. But perhaps their most interesting suggestion is that the “hot news” doctrine recognized under New York law be “federalized,” that is, enacted by Congress as a federal law applicable nationwide. As we discussed in a prior post, under the “hot news” doctrine, uses of news content that are not protected under federal copyright law can be challenged under the state law of unfair competition, and the Associated Press has been successful in using the doctrine to challenge the use of its content by competitors. Federalizing the doctrine would make it easier for other traditional publishers to similarly challenge the use of their original content in circumstances not covered by the New York law.

No doubt anticipating criticism for proposing laws that would favor traditional publishers, Sanford and Brown point to a precedent: Online publishers were favored in 1996 with the enactment of Section 230 of the Communications Decency Act, which exempts online providers from defamation and other liability from content posted by third parties. The protection that Section 230 provides to online providers has generally protected them from costly judgments based on content that they have not originated.

In July, European publishers issued a call for legal assistance in the form of the Hamburg Declaration. The document calls for “strongly urgent improvements in the protection of intellectual property on the Internet.” While the Declaration itself is short on specifics, the press release accompanying the Declaration referenced the Automated Content Access Protocol, a proposed industry standard that would enable content owners to specify to search engines through metadata embedded in the content not only how their content could be crawled and copied, but also how it could be displayed in search engine results. The proposed standard has been criticized as a “robots.txt on illegal steroids.” The Declaration calls up EU regulators to “back it up,” i.e., mandate search engines to implement the standard.

As the debate rages over both the root causes of traditional journalism’s economic troubles and possible legal solutions, the online world marches on. It is impossible to say whether any of these proposals for legal change will make it to the statute books. And even more impossible to predict is whether any of these potential laws will have an effect on the upheaval caused from the shift of content from traditional to online forms.

3 responses to “Changing the Law to Save Newspapers: Some Modest Proposals”