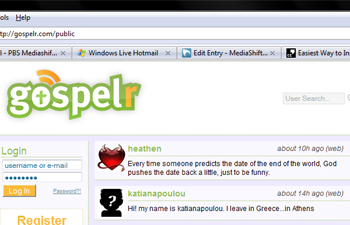 "Gospelr":http://gospelr.com/public, a side project by John Saddington, is a Christian-themed microblogging service.

It’s nothing new to see religious leaders using new media to try to energize their congregations or for religious adherents to use Internet technology to connect with others of similar faith. (Mark Glaser has written previously about Church 2.0 — the use of web 2.0 concepts to reorganize the traditionally hierarchical way that worship is conducted.) In a world where technology can connect you to friends and relatives on the other side of the planet, it’s not much of a stretch to imagine it’s also good for connecting communities of faith.

But for many religions, outreach and evangelism are an equally important part of the puzzle — and it’s here that web technology would seem to have less to offer. Social media is built on networks of friends with common interests. It’s easier than ever to communicate with more people online, but I wondered how effectively new media could be used to proselytize to people outside the faith.

There are many websites that try to harness Internet connections for missionary work, explaining how churches could use online video and Twitter feeds to catch web surfers’ attention. Andrea Useem’s Congregational Resources explains and demystifies social networking for religious leaders, while Carlos Whittaker blogs about his faith and social media at Ragamuffinsoul. Sites like these emphasize that one big obstacle to Internet evangelism is that the Internet is, at heart, a pull medium — meaning it’s often more difficult to reach a reluctant audience using the web than it is using older media such as television or radio. So while static webpages might be good for drawing in people already curious about a religion’s tenants, actually getting the attention of someone who wasn’t… that was a little more tricky without coming across as spam. That is, until the advent of social media, and its accompanying ability to build relationships online.

“Creating a web site is perhaps the most basic way to use the Internet for evangelism,” agreed Rev. Michael White, a United Methodist pastor and author of Digital Evangelism: You Can Do It, Too!. He noted that newer social networking sites offered more opportunities for outreach because they could better enable conversation than a static page.

“People of faith can use such social media as Twitter, YouTube, blogs, etc. to reach out both to ‘seekers’ (those looking for more information about religious faith) and believers alike to share the tenets of their faith, encourage deepening one’s religious faith, answering questions of doubt, and much more,” he said.

More worrying to many people of faith hoping to testify online, though, was the possibility that communicating through a computer screen could make it difficult to effectively connect with others, that the passion of their words would get lost in the translation to words on a screen.

“I think Internet communication can be both authentic and effective as a face-to-face connection, but it’s debatable whether it is as effective as a face-to-face conversation,” said White. “I believe the ability to read nonverbal language and vocal tone during verbal conversation makes a face-to-face connection more effective for evangelism than an email, an IM, a real-time chat in a chat room, or a blog, or even Facebook. Even with emoticons, it’s still possible to misunderstand another’s tone… Because I am a very straightforward person when it comes to stating my strongly held convictions, I have had to apologize more than once to someone who mistook my tone in an email as sterner than I intended.”

White noted that a simple website may be a good starting point to draw in curious visitors, but they are rarely enough to win converts by themselves. Missionaries have long understood that personal relationships are the key to winning hearts and minds. You’re less likely to listen to a stranger than to a friend, after all.

“For a long time, missionaries have been doing this,” he said, “Instead of just going somewhere and saying, ‘I’m a Christian, now convert!,’ they’ll try to create something of value to the community. Maybe they’ll start businesses or help out with farming, depending on the community. Eventually they’ll start attracting people because they have something of value to give. And as they establish relationships with people in the community, the hope is that this may eventually lead to conversations. We take the same approach.”

Saddington distributes free WordPress themes for download from his site. He said that every month thousands of visitors download his themes but that ultimately he hoped that a few of those people enticed by the prospect of free downloads might be interested enough to stick around to hear what he had to say.

Saddington explained that many people don’t see the web’s potential in evangelism because of a fundamental confusion about what evangelism is. While many see it as only the act of actively going out to recruit new converts, Saddington explained that it also referred simply to the sharing of personal stories of faith, both with fellow believers as well as non-believers. Whether that led to conversions or not, he said, was ultimately out of the evangelist’s hands — but the important thing was for people called to testify to find a way to open a dialogue.

“One of the nice things about social media is that it establishes a two-way conversation,” he said, “Historically, evangelism gets a bad rap because it looks like someone beating someone else over the head with a Bible. Instead of blaring our faith into people’s faces, we can use blogs and social media to dialogue. For example, with a blog, people can comment and start a dialogue. Social media has enabled us to tell stories faster and more effectively.”

Online conversations enabled by blogging tools can even be a more effective starting point than face-to-face speaking. Although everyone I spoke with agreed that it was no substitute for meeting in person, people were sometimes more open to speaking honestly about sensitive topics like their spiritual beliefs when they felt protected behind a screen (a situation that could be both less intimidating for the evangelist and less threatening for the evangelee).

“I’ve found that people are more willing to engage and communicate online than looking you straight in the eye,” said Anthony Coppedge, author of The Reason Your Church Must Twitter. “It takes a barrier out. It’s sometimes hard to look someone in the eye and say something but they can still type it. In that way, you can build very real and very strong relationships online.”

There exist religious-themed alternatives to most social media specifically targeting people of faith — Tangle.com provides a Christian alternative to YouTube, while Saddington’s pet project Gospelr is a Christian-themed Twitter analogue. While they may be good for uniting the faithful, some are skeptical of services that allow believers to segregate themselves from the wider world. Saddington said that both secular and religious services had their uses, but that people should keep in mind that they were unlikely to spread their faith if they confined themselves to online communities that consisted only of fellow believers.

“There’s no outreach when you’re talking to the already converted,” agreed Coppedge. He said that religious social media might be useful for parents worried about their children being exposed to inappropriate content on MySpace or Facebook, but saw little use for them otherwise.

“The focus should always be on building community,” he said, “If you limit yourself to only Christian communities, that’s not wise. Some people are afraid of using this technology, but you have to remember that technology is not inherently good or evil. It’s all in how you use it.”