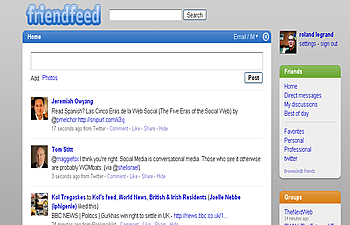 FriendFeed, where all my streams come together while enabling an endless conversation.

Online social networks are essential tools for journalists. They make it possible to build extended networks, search for story ideas, build contacts and dig up information. But even more important, they help to shake up the relationship between the individual journalist and the people formerly known as the audience.

But many journalists don’t know how to get the full benefit of online social networks such as Facebook or LinkedIn. They sign up, fill in forms, and … nothing happens. Or they have a lot of fun with friends but admit that, professionally speaking, their online network activity has little or no value. To get the full benefit of social networks, journalists have to be do more than just sign up; they have to be engaged and active within their networks. And that means they need to carefully think about what image they want to project of themselves, to a group of watchers that might include both personal friends and business colleagues.

There is one fundamental question for journalists in social networks: Who is it you want to reach?

In our newsroom workshop on social media, we talked a lot about Facebook. The main lesson of this discussion was that Facebook tries to be everything for everybody. That means that journalists can customize their pages to get the most out of them, but they should first think hard about what they want to achieve there.

There is one fundamental question for journalists in social networks: Who is it you want to reach? Or to put it another way, what kind of conversation do you want to engage in?

If your beat is covering bankers, chances are that you have to deal with a relatively conservative group of people. Maybe it is not a good idea to befriend them on Facebook in the same way as you would befriend your “real friends,” showing those funny pictures of that crazy party… But at the same time you do want to talk to these bankers in an informal, human way, without putting them off.

To help you run a page that caters to both professional and personal contacts, Facebook gives you tools to customize what you want to show to whom. These tools help you project an image of yourself that facilitates contacts. Facebook’s “privacy settings” allow you to control the access to the different components of your page: profile, search, newsfeed and wall, applications.

For every bit of information you can say who gets access: everyone, your networks and friends, friends of friends, or even specific individuals.

Whether you are on Facebook, LinkedIn, Twitter or whatever, you should invest time in your profile. LinkedIn is clearly a network for professionals, but many other networks are everything for everybody, and it is on these networks that you have to decide how you want to present yourself.

It is a bit odd to go to a bar, stay silent and almost invisible for the whole evening, and than complain that you had no interesting conversation. Yet this is exactly what happens a lot on online networks.

LinkedIn has a terrific system of questions and answers. You can ask questions to other people in your network; you can even specify the sector which you target for an answer. You can also answer other members’ questions, of course, a good way to get recognition as an expert in your field.

It is obvious there are a lot of opportunities here for journalists to ask questions or to announce that they are working on a story.

Each and every time you have a deeper contact with a source, whether it is online or in the physical world, you should try to connect also on a social network — but which network depends on your source. In that way your online friends are maybe not “real friends,” but they will be much more than just “followers”.

To start a conversation, you have to know who is out there and what kind of people there are in your sector. You will soon find out that the “degrees of separation” between you and most people in the sector you cover are very limited. You’ll discover new people who are connected to those you already follow. It is always very interesting to look on Twitter to see who that interesting new contact is following herself, to give but one example — most social networks allow you access to that kind of information.

If you feel you have a strong reputation in your sector and lots of people follow you on social networks, it could be interesting to start your own specialized page. Nothing stops you from creating a Facebook group which deals exclusively with your beat.

Linking it all together

So, instead of saying “Here we are now, entertain us,” you engage in online conversations and you even start them up. You will have a group of close contacts who you know pretty well, a group of contacts you are less familiar with, and a group of people which might be interesting but whom you hardly know them.

It is fashionable to look down on people who gather lots of followers because it seems they deal in what are called “weak ties” as opposed to the “strong ties” we have with our closest friends. Often, however, those weak ties can bring you unexpected and highly useful information and support. The “strong ties” share too much of your own background to give you radically new insights. It can be the weak ties that turn out to be very efficient.

A show of hands in the newsroom of the Pittsburgh Post-Gazette illustrates how editors and reporters are using the Facebook social netowork.

Having many followers or “friends” also helps to promote your articles, videos, pictures etc. Don’t rely exclusively on your newspaper’s marketing department!

In your sector, you are the main representative of your newspaper, radio or television station or blog. Having good online conversations is probably more important for the brand of your publisher than yet another marketing campaign.

Of course, it is also important for you as an individual journalist. It is important to behave like a one-person enterprise, because, at the end of the day, that is what you are. It helps you to survive and flourish in difficult times for the media, and it helps your publisher.

How to keep an overview of all this? Enter FriendFeed, a feed aggregator that groups almost everything together in a fast moving stream of information, and you can customize, slice and dice that information and your contact lists as you want.

Media institutions have had to grapple with the fact that social networks are knocking down the wall between journalists’ personal and professional circles. The Wall Street Journal recently issued new rules of conduct for its employees regarding social networks. I do agree with some of these rules, like the warning against misrepresenting yourself using a false name while collecting information for an article. (Although maybe there are exceptions in an investigative journalism context), but there has been some criticism of the rules. One of the most interesting reactions came from venture capitalist Fred Wilson, focusing on three rules:

Twitter, blogs, Facebook, etc. also provide the opportunity for reporters and editors to come out from behind the institutional voice of the paper — a voice that is less and less trusted — and to become human. Of course, they should mix business and pleasure.

I think this is a most profound reaction. If we journalists want to survive, we will have to learn to come out from behind our institutions and to speak in a human voice — to engage in genuine conversations.

What is your take on this? Do you feel online social networks are crucial for your job? And how should we behave on those networks, being journalists?

3 responses to “Journalists Should Customize Social Networks to Maximize Experience”