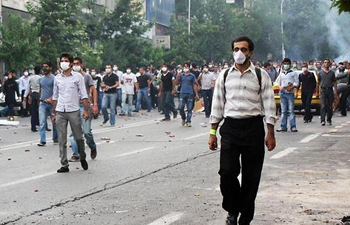 Photos of June 21 protests in Iran are being disseminated online via social media by Iranian citizen journalists. Photo collected but not taken by "Misterarasmus":http://www.flickr.com/photos/arasmus/ via Flickr.

Like many people, I have been watching this so-called “Twitter, Facebook, YouTube, [Insert New Media Application] Revolution” unfold in Iran from the comfort of my own home. Watching the dizzying and horrifying images that have emerged on the Internet has triggered a whirlwind of emotions and thoughts.

I was shocked and outraged by the death of Neda. I felt a sense of awe watching a group of women defiantly walking the streets without head coverings as if they were in a Pantene shampoo commercial.

Kudos to the brave citizen journalists of Iran who have used their cell phone cameras to finally give us a more complete picture of their country."

I often felt bewildered watching these videos, for I consider myself to be somewhat worldly, and while I always assumed there to be Iranian dissenters, I had precious little knowledge about them. It turns out I’m not the only one who was in the dark. The image that most of the world has been getting about Iran just does not match up with the one that we’ve only recently been receiving via social media. But the tools for ordinary Iranians to get their stories out have existed for a while — so why is it only now that Iranian citizen journalists are using them? And how is the work of citizen journalists in Iran changing the way the world sees their country?

What the world sees

Being a citizen of the U.S. currently based in Israel, I am generally shuttling back and forth between Iran’s two greatest enemies.

While it can be expected that Iran would cast both “Big and Little Satan” as a monolithic evil entity in its media, I doubt that either the U.S. or Israeli media do a much better job showing Iran for what it actually is: a culturally rich country with an educated populace with varying political and social views.

I find this a bit disturbing, especially in this day and age.

This formula sums up what the average Israeli knows about Iran:

Of course, Iran does a great job bolstering this viewpoint, by acting the part of a maniacal regime bested only by North Korea.

Yet in Israel, one gets the sense that the snake has finally been let out of the bag, and it’s not that big and bad and poisonous after all.

While many Israelis I’ve spoken to are using the current events to validate their claims that the Iranian government is out of its mind, the overriding sense is one of surprise that the Iranian people are saner than previously thought.

Who knew that most Iranians support women’s liberation, a more compassionate Islam, and a free press?

A month ago, most Israelis couldn’t name one Iranian besides Ahmadinejad. Now some here have actually started wearing green in solidarity with Mousavi and company. Israelis are now realizing that they actually have a lot in common with Iranians, which I imagine is true across much of the world.

The big question I have is why did it take so long?

Couldn’t these iReporters, as CNN calls citizen journalists, have uploaded anonymous stories a month or a year ago? Why did it take a fraudulent election and street riots to get the world’s attention about the repressed majority in Iran?

I suppose the answer might have to do with the “if it bleeds it leads” business model in news journalism.

Iranian bloggers have long been the only truly independent journalists Iran has to offer, yet they have been largely ignored by the Western media as either not credible or not relevant. It’s funny how quickly breaking news and street riots mitigate both of these factors.

The Iranian government, on the other hand, has always taken bloggers very seriously. According to the Committee to Protect Journalists, an independent non-profit organization, Iran is considering passing a law that would make the creation of blogs promoting “corruption, prostitution, and apostasy” punishable by death. To date, millions of websites have been blocked, and hundreds of bloggers have been arrested. In March, cultural blogger Omidreza Mirsayafi died in prison under suspicious circumstances. He was only 29.

If these intrepid citizen journalists are willing to sacrifice their lives to report from Iran, the least we can do is extend them a hand and publicize their work as much as possible, even if it’s not about violent or sexy topics.

In general, it would be nice to read and see reports from despotic regimes during times of peace, so that we can have a window into their world before the blood spills. (One good example of seeing into the lives of people in a war zone is the “Gaza Sderot” video show that I profiled on MediaShift.)

Let this be a wakeup call for the Western media that has been collectively hitting the snooze button on Iran since 1979.

It’s high time to tap into the plentiful and natural resource known as citizen journalists. The advantages are numerous: There’s no need for an expensive bureau. They’re already on the ground. Plus, they speak the language.

It should also be a stern warning to other governments that forcefully control their people and their outlets for free expression. From here on out, the relationship between press freedom and citizen journalism campaigns will be inversely proportional.

A June 21 confrontation between protesters and Basij paramilitary forces

Whether it be China, Egypt, Cuba, or Burma, totalitarian states should note the futility in stripping the powers of professional journalists, because citizen journalists have the tools, the resolve, and the tenacity to fill the void.

Kudos to the brave citizen journalists of Iran who have used their cell phone cameras to finally give us a more complete picture of their country. While this may not be the revolution many Iranians were waiting for, we will look back at the events of 2009 as a watershed of sorts for citizen journalists across the globe, who got the attention of the wider global audience.

Thank you. We’ve gotten the message. And now let the draconian regimes of the world get theirs: If you don’t change your ways, the revolution will be uploaded to the Internet, and then televised.

Iran protest photos collected but not taken by Misterarasmus via Flickr.