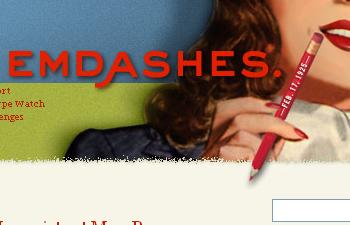 The Twitter user who writes under the handle Vanityfairer would not tell me her real name. She began following me in December after I mentioned the magazine Vanity Fair in a tweet, and for the next few months we exchanged replies and direct messages about the magazine’s content and its writers. Though she made no claims to be associated with Vanity Fair, there were debates in the blogosphere over whether she was a marketing ploy for the publication. That speculation ended after the magazine’s web editor wrote a post thanking her for her coverage:

One of them is a mysterious and fascinating (to us, anyway) character who calls herself Vanityfairer…She has been doing an amazing job of covering our work here on the site without our knowledge.

But she’s not the only fan blogger who is passionate about Conde Nast publications. There’s also New Yorkerest, a blogger whose sole purpose is to link to “the one can’t-miss piece from each issue of The New Yorker, as well as the more analytical Emdashes, a New Yorker fan site about “people, subjects, and ideas within the magazine, and events and conversations outside its pages.”

I wanted to strip away myself and just let it be just about my experiment and the content...It's about the content, not about who I am." -- Vanityfairer

What is it about these publications and their brand loyalty that fans are willing to create blogs solely devoted to them? With the recent news that CNN purchased a Twitter account started by someone who didn’t even work for the network, it’s becoming increasingly apparent that these kinds of fan bloggers are a valuable commodity, a virtually free marketing tool that pumps new readers to a media company’s news content. But how did the New Yorker and Vanity Fair create this kind of brand loyalty? And is it possible for other publications to emulate them?

Though she wouldn’t tell me her name, Vanityfairer said she is in her 30s and is a writer, though in a “completely different industry” than Vanity Fair. She became a diehard fan of the magazine about a decade ago while in grad school, attracted to its odd mixture of what she called high and low brow articles. She started the Twitter account last year in part because she wanted to imitate this eclectic variety in content, trying to mimic the voice of the magazine.

“The other reason I started it was because, frankly, Vanity Fair didn’t have a presence on Twitter,” she said. “Because I can tell you quite honestly that…had they already had a Twitter presence, I might not have gone and created the Vanityfairer account. So it really was about filling a void there.”

But Vanityfairer didn’t start the account as simply yet another outlet to link to new articles as they appeared on the magazine’s website. That kind of one-way broadcasting, she said, is antithetical to the nature of Twitter, and it annoys her when media outlets simply use their Twitter accounts as yet another feed.

She began by following journalists and famous personalities that she thought someone at Vanity Fair might follow, but it became quickly apparent that many of these people wouldn’t follow back or engage in conversation. Vanityfairer then set up several feeds searching for mentions of the magazine and soon began to find other devout fans, a network that has led to her amassing over 2,000 followers as of this writing.

So why the anonymity? Vanityfairer told me that she has been ambivalent about this decision since the first day and she constantly flirts with the idea of coming out. It’s not her nature, she said.

“I have to tell you I struggle with this all the time,” she explained. “I don’t like being anonymous, I feel like it’s so contrived and it feels silly. And I don’t mean for it to be so contrived or pretentious but really what happened was I wanted to strip away myself and just let it be just about my experiment and the content…It’s about the content, not about who I am.”

“I think it shows that we have personality, and that we have a connection with our audience,” he told me in a phone conversation. “Which is a great thing to have and that the audience takes it seriously. And you realize when you come into contact with someone like that — I’ve never met Vanityfairer and I have no idea who she is — but you realize that just because you work there doesn’t necessarily mean you have some greater claim on the publication than the fans. You’re all kind of one big entity. There’s a responsibility there for that relationship, but it’s also fantastic.”

Though Vanity Fair hadn’t been active on Twitter when Vanityfairer launched her account, the magazine now uses the micro-blogging service regularly. Since his discovery of the fan blogger shortly after joining Twitter, Hogan said he messages and replies to Vanityfairer regularly, along with other fans of the magazine.

“Obviously a lot of those people [following the Vanity Fair Twitter account] are passive,” he said. “But if you can find the people that are active and get them excited and involved, then yeah, that’s definitely going to be a good stepping stone to having things go viral, which is a lot of what it’s about online.”

Where Magazines and the Web Intersect

I spoke with Emily Gordon, founder of Emdashes and editor-in-chief of Print Magazine about the loyalty readers have for these magazines. It is this kind of devotion, she said, that has motivated dozens of fans to publish blogs celebrating it.

Gordon has had a long career working in the magazine medium, but she was also an early Internet adopter. In the early ’90s, she and a friend became regular participants in a MOO, a text-based online virtual world that was a precursor to Second Life. When blogs made their debut on the web, she knew early on that she wanted to publish one, but was hesitant to tackle topics already well covered within the blogosphere.

“But I thought, ‘what do I care enough about to write about?’” she said. “And the reason I registered the domain for Emdashes was because I worked as a copy editor for a long time, and I love punctuation. So I thought it would be a punctuation blog. But I started poking around and there were other punctuation blogs, so I immediately lost interest. I thought, ‘I don’t want to do something that someone else has done.’ So I went to lunch with a friend and said that I want to start a blog and I have a couple ideas. And I was thinking I read the New Yorker a lot, and there’s nothing on the Internet about the New Yorker basically. I mean, even the New Yorker back then barely had a web page.”

Her friend encouraged her to go through with it, and in December 2004 she began penning critical pieces about the magazine’s content. Over the next four years, other writers coalesced at the site, which began incorporating guest columns and even a daily comic.

After aggressively covering the magazine for several years, Gordon was added to the New Yorker’s Sunday press list, meaning that she’s one of the few within the media who receive an issue on Sunday, well before most subscribers. When she was promoted to editor-in-chief of Print Magazine she had much less time to write for the site. But by that time Emdashes had become a well-oiled machine, with a book editor named Martin Schneider taking over many of her editorial duties.

But it isn’t only her love for the New Yorker that inspired her to cover it closely — it’s also the legacy it has within her own family. Gordon said that her parents have an even more comprehensive knowledge of the publication since they have known it longer than she has. They have a familiarity with the magazine that she herself aspires to. In 2000, University of Delaware professor Ben Yagoda published an extensive history of the magazine titled “About Town,” in which he documents how in the mid 20th century the New Yorker became a go-to place for America’s sophisticated and well-educated. That branding, Gordon told me, lives on to this day. So much so that its fans would fight to keep it from ever going under.

Some anecdotal numbers seem to support this notion. Since David Remnick took over the magazine in 1998, it has seen a steady increase in subscribers. According to Alexa Cassanos, the New Yorker’s director of public relations, it has a subscriber renewal rate of 85%, among the highest in the magazine industry.

“Average time spent with each issue is 81 minutes, more than The Economist, Fortune, Forbes, and many, many other others,” Cassanos wrote in an email.

“It’s incredibly flattering obviously,” she said of Emdashes and other similar blogs. “I hope it speaks to the passionate readers we have.”

Like Gordon, Cassanos grew up in a home that always had issues of the magazine lying around. Also like Gordon, she long dreamed of working for the magazine.

And perhaps that is part of the true reason behind these fan communities, that our fandom of these prestigious publications — The New Yorker and Vanity Fair — represents something we all aspire to.

“The New Yorker represents the fulfillment of dreams,” Gordon said. “Not just the dreams of all the original contributors whose dream probably was like yours and mine, to work for the New Yorker, but also every individual article in the New Yorker is edited literally close to 100 times. I mean it goes through that many drafts. Every cartoonist for the New Yorker submits like 10 cartoons a week, most of which are rejected. Sometimes people go years without an acceptance. Every poem has made it through a filter of thousands of poems a week that have come through their poetry department. Everything about it is so carefully curated and tended like this incredibly precious high end richly fertilized garden that you feel as a reader of the magazine that you are participating in a community.

“That’s why generation after generation it keeps bringing in those peole who believe in a world in which not only can greatness be achieved, but it can be done in this elegant way, in a way that doesn’t compromise your sense of dignity and grace.”