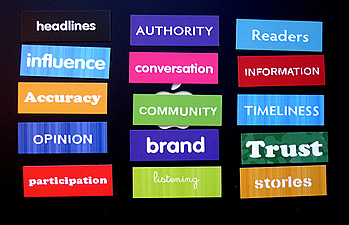 Very recently I did something weird. Normally, when moderating our online community at Mediafin, I first read the news articles before I read the comments left by community members. Feeling a bit bored, I reversed this. I started by reading the comments and tried to figure out what the articles were about. It was a weird (but rather subversive) sensation finding that it was more fun reading the site like this.

Why did I like reading the comments rather than the articles? I was asking myself that question, when I saw tweets flashing by, quoting the social media thinker Clay Shirky at the Nonprofit Technology Conference. It seems Shirky was saying that emotions are becoming more important in these times of rapid Internet communications (e.g. the fast growing popularity of micro-blogging). When things speed up, we are good at feeling fast but not thinking fast.

You are not giving up on being neutral here, but you show your passion for the subject, and you invite the community to take part in this passion."

One might think this is a bad thing. Emotions seem to be at odds with reason, and combined with the power of media they can lead to hysteria. I don’t know exactly what Shirky has to say about this, but I do remember that philosopher Martha Nussbaum argued in her book Upheavals of Thought that emotions can make valuable contributions to the moral life.

“Emotions” don’t have to mean knee-jerk, populist reactions by an uninformed mob expressing itself anonymously on forums. Emotions can refer just as well to people engaging in conversations where they do more than just argue facts — they express why they are interested in a topic, what they fear, and what they hope for.

News reports, on the contrary, are written in a disembodied style. The author seems to be absent, so that their voice does not get in the way of “what is really going on.” Of course, the audience at large knows that the author isn’t really absent just because they try to keep their own thoughts out of a story.

A journalist’s thoughts and opinion always, in some way, affect the story. At the very least, she makes choices by what she deems relevant enough to include and what format — such as a news report, an analysis, or a commentary — she decides a story should take. Other crucial choices have to do with titles, captions and illustrations.

But yet, the journalist often prefers to hide herself. The intentions are pure enough: journalists really want to communicate the facts and only the facts, without imposing their ideas, convictions and emotions. In fact, emotions are completely banned.

My take on this is highly tentative, but I am eager to know your thoughts on this matter. I think that by eschewing emotions and references to themselves, journalists cut themselves out of the conversation. Often this means that what they write is rather boring, especially when compared to the reactions of the community.

I guess that explains why I liked reading the comments rather than the articles. It might also explain why the community members often hold discussions only amongst themselves, without implicating the apparently-absent journalist.

Formulated positively, I think that journalists should not refrain from expressing themselves in their articles (I am focusing here on text news reports) when they can do so without endangering their neutral stance.

The re-appearance of the journalist

I see three ways to acknowledge emotions and the presence of the journalist in the conversation (without sacrificing the ethics of news reporting):

> Referring to emotions. I think that at least some titles on a home page should refer to emotions. Instead of writing “Stocks gain after better than expected forecasts,” one could write “Investors hope for recovery.” Instead of saying “GM shares tank after negotiations collapse” one could say “GM tanks, investors fear bankruptcy.” It would acknowledge that markets, politics, sports and so many other things are driven by emotions. I don’t think there is anything wrong with referring to those emotions. Talking about different emotions on your news home page simply makes it a more human home page.

> Talking to the community. It isn’t necessary for a journalist to hide from the community; she can speak to readers without betraying her principles. For instance, writing about rumors stating that Chrysler goes for Chapter 11, one could announce that the newsroom will cover president Barack Obama’s press conference about this issue, and invite the community to watch the videostream, while providing the link. Or one may simply remind the community members of a background story which you deem particularly relevant (maybe pointing out why it is relevant). These are very simple and straightforward interventions, but very often journalists refrain from doing even this much. They prefer putting a link to the videostream without actually saying anything to the community.

I think we can learn a lot from blogging here. Bloggers would almost certainly say they look forward to learning more about the issues at hand, while providing the link to the videostream. You are not giving up on being neutral here, but you show your passion for the subject, and you invite the community to take part in this passion.

> Another “technique” common in blogging is asking the community for an opinion. What does the reader expect will happen in the Chrysler case? Would a bankruptcy be a bad thing? Ask the reader! The writer of the story invites the reader to share what she or he thinks (or feels!).

These are normal, simple questions we all ask in a normal life context, but when writing news stories, they suddenly seem inappropriate. Is this because of the pervasive influence of news wire articles? Because of some deep philosophical convictions that a story should be a spotless mirror or window showing the reality as it is by removing all trace of the author? If we have those convictions, I think we should investigate them critically.

I am sure there are many more ways to report the news while actually speaking to your community (but without abandoning a neutral position). I’d like to ask you whether you think abandoning the disembodied style of news reporting would endanger the neutrality of the reporter. Or what other ways do you think journalists can engage in the conversation? Just let me know your take on these matters in the comments below.

8 responses to “Journalists Can Embrace Emotions and Remain Neutral”