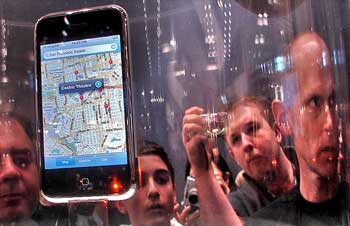 The news out of the Missouri School of Journalism two weeks ago was a little confusing.

The school announced it would be requiring all incoming freshmen journalism pre-majors to purchase an iPod Touch or iPhone. At least that was the lede in stories by the Columbia Missourian and The Maneater.

I'm the very first person to say innovation is wonderful. What I think has been done here is that we've kind of put the cart before the horse." -- Kelsey Proud, Missouri journalism student

But the “requirement” wasn’t really a “requirement,” if you read further into the Missourian article:

The requirement will not be enforced, however, and there will not be a penalty for students who chose not to buy an iPod touch or iPhone, [Associate Dean Brian] Brooks said.

“The reason we put ‘required’ on it is to help the students on financial need,” Brooks said. “If it’s required, it can be included in your financial need estimate. If we had not required it, they wouldn’t be able to do that.”

Indeed, the school’s FAQ about the new requirement calls it a requirement for “a web-enabled audio-video player”:

This requirement is best met by purchasing the Apple iPod Touch, which has all the features the Missouri School of Journalism intends to implement to achieve its academic objectives and those of its students. There are alternatives to the iPod Touch, but none that we consider equally capable…

The entrance to Missouri’s School of Journalism

The faculty of the school, which had apparently not approved the “requirement” when it was announced, voted to approve it after some heated debate.

Now, I may be reading a little too little into the phrase “web-enabled audio-video player,” but it sounds like a laptop (which the J-school already requires) would be more suited to that description than an iPod Touch or iPhone.

Perhaps they meant to use the word “mobile” or “hand-held” in that vague terminology, because that’s clearly what they are aiming for in the rest of the FAQ.

Rob Weir, director of digital development at the Columbia Missourian, explains in more detail about what the requirement might mean.

Weir seems to be in favor of the move:

Now, aside from the ‘recorded lectures’ thing, there are other ways students could use an iPhone or iPod Touch — for mobile newsgathering, for application development, to read news, etc. And teaching students to use an iPhone for newsgathering doesn’t lock them into that API any more than teaching InDesign means you have to use that for design.

[See more from Weir in an UPDATE below.]

“I’m the very first person to say innovation is wonderful,” Proud told me. “What I think has been done here is that we’ve kind of put the cart before the horse. It is good for the future of journalism that we start learning how to use mobile technologies. But, making it a requirement for freshmen who may or may not continue into the journalism school…I don’t think is appropriate.”

She notes that many incoming freshmen do not end up finishing the journalism major, and students are concerned about costs and the utility of the new hardware (as you can read in this Maneater editorial: Journalism school should drop iPhone or iPod Touch requirement).

Using iPods to attempt to better educate university students is not new. Duke was the first U.S. university to give iPods to freshmen in 2004.

Alex Klein, online editor for the Duke Chronicle, hasn’t noticed that the iPods handed out at Duke made much of an impact on the Chronicle’s online traffic — yet.

“Student (and staff/faculty) readership of our print product has remained and will remain strong, at least in the near future, no matter how popular mobile devices get,” he said. “There’s just something very collegiate about grabbing a physical newspaper to read at lunch or, more likely, during class that makes it difficult to see a future without ink-stained fingers.”

Klein thinks the iPod Touch/iPhone requirement is not the best approach for Missouri, either.

“I think it’s great to recognize that news distributors must focus on bringing their content to smaller machines,” he said. “I do not think it’s great to make mandatory the purchase of a specified, closed device that is merely part of the end user experience, not the production process. I think it’s a tough argument to make that these journalism students need iPod Touches in order to learn that point.”

Abilene Christian University was the first university to hand out iPhone/iPod Touch hardware to all incoming freshmen last year.

Cade White, assistant professor at ACU, has been pleased with the educational aspects of the iPhone on campus, but the school’s media haven’t taken advantage of the mobile platform as much yet.

After wrestling with this story for two weeks, I still don’t have a clear-cut stance on the overall topic. At Eastern Illinois University’s journalism department, we just initiated a “laptop initiative” for incoming freshmen requiring a Mac laptop and software. The justification for a laptop purchase is easier to make because it is a technology that will serve students in all their classes across the curriculum.

The requirement for a mobile device is more difficult to justify. It can be done, and the Missouri journalism school has made a reasonably strong case for their initiative.

Here are some potential advantages and disadvantages to such a requirement, as far as I can gather. If you know of others, please drop them in the comments.

• Allows students to become familiar with uses of “mobile” technology for newsgathering — Students will be able to use these devices to record interviews, send stories from the scene of a news event, and find other uses for small devices in the journalistic space.

• Allows students to become familiar with the “mobile” environment/lifestyle — Students who may have never used a smartphone will be able to understand how these devices are used and broaden their perspective on news consumption in the wired world.

• Allows faculty to develop and experiment with new ways of educational delivery — Podcasts, videocasts, applications, and other potential delivery methods may open up new avenues of learning.

• Allows in-house media platforms to experiment with different ways to deliver content via mobile technology — This requirement will allow the school to test different iPhone apps with a built-in audience, and allow students to share in that development process. That’s especially relevant at Missouri where they’ve had iPhone app development contests.

• Requirements that aren’t requirements — I understand the reasoning behind making this a “requirement,” but the double-speak is painful from a journalistic standpoint, and surely will frustrate students who may be satisfied with the mp3/mobile/whatever technology they already have.

• Locks students into a single, proprietary “mobile” platform — Apple’s iPod Touch/iPhone platform is only one of several mobile platforms competing in this space. Focusing on that platform ignores other options like Google’s Android, Windows Mobile, the Kindle or other e-reader devices, and other smartphone platforms.

• Cost — Is it appropriate to require students to purchase additional technology in this economic environment, when many are already struggling to make ends meet, stay in school and purchase obscenely priced textbooks and other requirements for college?

• Ignores future developments that may alter the balance of power in mobile technology — The iPhone/iPod Touch has the “mojo” at the moment in the mobile space. But again, four years is a long time to say one platform will dominate in the mobile universe (see Palm).

• Underutilization of technology by faculty — Additional efforts at podcasting class lectures, publishing educational content to new applications, etc. will require additional time investments from faculty. I don’t know about the workload at Missouri, but that additional time will have to come from somewhere.

For now, Missouri’s J-school seems set on moving forward with the “requirement,” despite the misgivings. And it will be years before anyone can adequately determine if it was the right decision or not. What do you think? Share your thoughts in the comments below.

UPDATE (12:33 PM EDT 5-20-09): The Columbia Missourian’s director of digital development Rob Weir adds some context via an e-mail to me. He says that the lecture-replay possibilities have potential for large classes. Students can “time-shift” and listen again to lectures while they are multi-tasking.

Besides audio, still photos and video, students could also use an iThing to text or Twitter breaking news. Our local news station, KOMU, has already had a lot of success covering breaking news with Twitter — a KOMU reporter was interviewed by multiple TV stations in Missouri in the course of reporting on tornado damage. She was tweeting en route to the story and before her on-camera reporting. It led to her not only getting exposure (which is crucial to a student reporter) but also led to her pretty important reporting getting further distribution.

You can make the argument that those functions can also be dealt with by using other mobile devices, and you’d be absolutely correct. But the iPhone or Touch also offers specific apps for consuming news, as well as a web browser that beats the heck out of anything else in being able to deal with sites that aren’t opimized for mobile browsers.

Missouri’s J-School has an iPhone app competition that will benefit from more exposure with incoming students (here’s a news release about last year’s competiton):

This year, several teams of students competed to build applications for the iPhone or Touch, and the winning teams got a chance to travel to Cupertino to present their ideas to Apple. In the process, they worked with computer science and engineering students, getting exposure to a broader set of skills than they might have merely from journalism students. And they learned entreupreneurship skills in the process, which we know are important for young journalists.

On the single platform advantages:

I get the argument that a lot of what we want to do with a Touch or an iPhone can be done with other devices. But the fact is that the Touch is free to students with a [Mac] laptop bundle, and there’s a lot to be said for having them (mostly) using the same devices. As someone who also does tech support for the Missourian, I’ll say that having a unified system architecture would save me a LOT of headaches on the integration side. (We already deal with far too many issues with negotiating between Windows, Mac and Linux servers.)

Thanks to Rob for providing some further context for the discussion.

Bryan Murley is assistant professor of new and emerging media at Eastern Illinois University, where he advises DENnews.com, the Pacemaker-winning online site for the student newspaper. He is also the director for innovation at the Center for Innovation in College Media, where he leads the weblog Innovation in College Media. He is the college media correspondent for MediaShift.

5 responses to “Is University of Missouri’s iPod Touch ‘Requirement’ Fair?”