A Brief History of AP’s Battles with News Aggregators 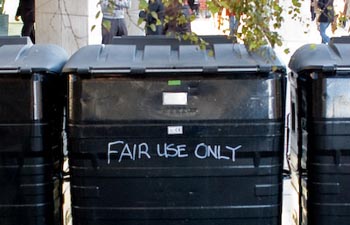 The news is information, and information wants to be free, as the saying goes. But for news organizations, the news is a product that is collected, recorded and sold for profit. And those profits are now under extreme economic pressure, threatening some news organizations with extinction. Both online and traditional news outlets are regrouping, retrenching and reconsidering their business models in order to survive in the rapidly evolving information economy.

And some news organizations are also looking to the legal system for assistance in protecting their product from the challenges presented by the proliferation of online news sites, including the copying and redistribution of their news stories by unauthorized third parties.

Questions remain over the extent to which news organizations can protect their content from unauthorized use."

What are the legal tools available to news organizations that want to protect their content? Several strands of intellectual property law and related principles must be considered in evaluating the nature of the rights asserted by news organizations when they do battle over rights to news content. And it’s best to understand past rulings and the history of litigation between wire services and news aggregators.

It’s true that you can’t, literally, copyright the news, insofar as the news consists of individual facts. It’s a bedrock principle of copyright law that copyright rights extend to the expression in a work, not to the individual facts that are conveyed. (See Feist Publications, Inc. v. Rural Tel. Service Co.) But verbatim copying of a portion of an online news article containing facts, even when it is accompanied by a link to the original source, can constitute infringement of the copyright in the author’s expression, according to the position taken by news organizations in lawsuits against online news aggregators since the early days of the commercial Internet.

The news aggregators have countered with the argument that making available an excerpt of a news story, accompanied by a link to the original source, is a “fair use” under copyright law. This is also the argument made in defense of bloggers that excerpt news stories, either with or without adding additional commentary.

Determining fair use under copyright law is not a simple task. Determination of whether a use is “fair” involves evaluating a number of non-exclusive factors enumerated in Section 107 of the Copyright Act, such as whether the use is commercial or non-commercial, how much of the underlying work has been copied, and whether the resulting use competes in the marketplace as a replacement for the original. The determination of fair use is a highly fact-sensitive inquiry that requires courts to weigh and balance numerous factors, making it difficult to predict how they might view a particular use of excerpts of and links to news stores.

It is therefore not surprising that there has yet to be a definitive ruling on the extent to which news aggregators or bloggers are protected by the fair use doctrine, despite a number of highly public disputes. For example, the parent company of the Boston Globe recently settled copyright litigation brought by GateHouse Media over the excerpting of GateHouse content on the Globe’s Boston.com website.

And in 2007, the Associated Press brought a copyright infringement lawsuit against the Moreover news aggregation service owned by Verisign. This dispute also ended with a settlement on undisclosed terms.

The Associated Press came up against the same difficulties in defining fair use when it demanded that the Drudge Retort parody website remove excerpts of and links to AP news stories. This dispute was also settled out of court, apparently when the Drudge Retort removed the excerpts. At the time the AP announced that it planned to issue guidelines outlining what it believed to be the parameters of fair use of its news content, but apparently those guidelines have never been issued.

The Center for Social Media recently released a video that tries to explain best practices for video-makers who want to repurpose copyrighted content under fair use:

One of the most prominent news aggregators is, of course, the Google News search engine. Google’s presentation of excerpts and links has been challenged by several news organizations, although those challenges brought under U.S. law have been settled. In 2006, Google settled a dispute with the AP over the use of its content on the Google News site in the face of litigation threats, agreeing to pay the AP an undisclosed licensing fee for the inclusion of AP content and also to give authorized versions of AP stories priority in search results on Google News.

But the controversy between Google and the AP has heated up against recently. According to Forbes, the AP is seeking to strike a new deal with Google that will give authorized AP content priority in general Google searches. Apparently, the AP hopes that giving its authorized content priority in searches will limit the availability of unauthorized excerpts of its news stories by burying them in search results.

Google has been sued internationally as well over aggregation of news content. In 2007, a group of Belgian newspapers obtained a copyright infringement ruling against Google for the inclusion of their content on the Google News search engine and, in 2008, the group announced that it would seek damages of as much as $77 million. That ruling may have influenced Google to settle a similar lawsuit brought by French news outlets with an agreement to pay undisclosed licensing fees.

Disputes over reuse of news content are not new, and the Associated Press has long been at the forefront when it comes to challenging rivals that use its content. In the early 20th century, the U.S. Supreme Court was faced with a case in which the AP sought to protect its news content from a rival news organization that traded on the time difference between the publication of AP stories in East Coast newspapers and the later deadlines for West Coast papers. The rival paid off AP employees to pass on early versions of AP stories destined for East Coast papers, rewrote the stories to avoid a copyright claim, and sold the resulting product to West Coast news outlets, thereby taking advantage of AP’s effort and expenditure in gathering the news.

In its landmark 1918 ruling in International News Service v. Associated Press, the Supreme Court recognized a limited, “quasi property” right in news content that was distinct from copyright law. The Court found that AP could sue its rival for the tort of misappropriation, on the theory that the rival’s conduct constituted “unfair competition in business.”

Although the Supreme Court’s ruling was subsequently criticized for both technical and substantive reasons, the hot news doctrine survived in a number of subsequent rulings, including the 1997 opinion of the Second Circuit Court of Appeals in National Basketball Association v. Motorola, Inc., where the NBA sought to restrain Motorola from offering its subscribers a service that reported scores at NBA events in near-real time.

In 2009, in The Associated Press v. All Headline News Corp., a federal district court ruled that despite its age and some criticism of its continued viability, the hot news doctrine was still “hot,” and that under New York law the AP could assert a hot news misappropriation claim against the All Headlines News company for copying and rewriting — or in some cases, copying in their entirety — AP news stories.

The Digital Millennium Copyright Act (DMCA) is part of copyright law, but it gives the owners of digital content some additional rights. In the AP’s case against All Headline News Corp., the district court also ruled that the AP could pursue a claim under the copyright management provision of the DMCA, 17 U.S.C. §1202, which prohibits the removal or alternation of “copyright management information.” The court concluded that the defendant may have violated this provision when it removed references to the AP as owner and author of the articles that it copied.

With most of the disputes over the use of excerpts of news stories settled, questions remain over the extent to which news organizations can protect their content from unauthorized use. But new controversies arise on a regular basis. The Associated Press, ever the leader in this area, has recently announced that it intends to pursue “legal and legislative actions” against parties that use but do not license its content. AP Chairman Dean Singleton stated at the annual AP meeting in April: “We can no longer stand by and watch others walk off with our work under misguided legal theories.” As financial pressure on news organizations continues and the need to protect and monetize content becomes even more pressing, such disputes are likely to continue.