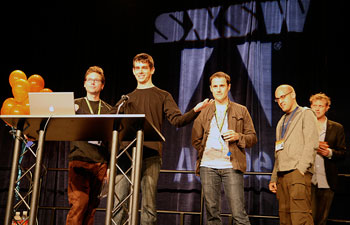 For the uninitiated, SXSW can be an overwhelming, daunting experience. But for tech-savvy patrons, technology has made the conference an immersive, engaging, interactive playground. Using wired tools, music, tech, and film fans alike can get the most out of the SXSW experience.

By using social networks and dynamic tracking, a SXSW attendee can truly maximize one of the most hectic and fun weeks of the year."

SXSW has just celebrated its 23rd year. For the first 15 or so, most people were on their own when it came to figuring out where the best parties were, where their friends were headed, or when that secret party on the pedestrian bridge was starting. Mobile web browsing was in its infancy, social networks did not have the reach they do today, and portable devices were far more limited in bandwidth and function.

The past four or five years have seen a massive boost in connectivity for festival goers, and with that comes the ability to attend SXSW as a wired individual woven into the social fabric of the conference. Dynamic websites, iPhone applications, and social networks have combined to allow a savvy user to tap into the pulse of SXSW in a real-time, interactive fashion.

The first step in preparing for a wired SXSW experience is to get involved in as many relevant online communities as you can find, as early as possible. Between networks on the roll-your-own social site Ning, local sites such as Austin360.com and Austinist.com, and the official SXSW.com website, an attendee can begin planning and getting to know other festival-goers well before the conference begins.

The value of this cannot be overstated — by forging online relationships in advance, you won’t be blindly meeting people for the first time when you arrive. By the time SXSW rolls around, you can already have a full calendar of meetings, parties, and showcases just based on the connections made via online communities.

Facebook is another tool that can be used to create a schedule. Many companies that require RSVPs for their parties use the Facebook event module to facilitate the process. This allows a user to organize all upcoming parties in one place, and access the information from any computer or web-enabled phone. Compared to the spreadsheets and text documents used by many attendees, this is a much more dynamic and accessible way to plan the week.

Social networks are critical in getting to know the people in the conference’s ecosystem, but they don’t help as much when you finally hit the pavement on Sixth Street in Austin. This is where your digital conference toolbox comes in.

The first and most obvious tool in this arsenal is the micro-blogging platform Twitter. There is no easier, more dynamic, or simply useful service for navigating SXSW than this. The challenge is knowing how to best use Twitter and related applications to maximize their bird’s eye view of the conference.

At this point, you should be so immersed in relevant social networks and local sites that you are already following the Twittter feeds of other attendees. Even if you were doing nothing more than browsing their updates via your mobile phone, you would still come across more events than you could squeeze into your schedule. However, that is only accessing one stream of information from this source.

Twitter offers a tremendous tool in its search capabilities. By searching for the right keywords, you can learn how atrocious the lines are for a party, find out how long you have to get to a venue to catch a band, or find the closest free beer. For example, I was at a dinner with some colleagues, trying to time it just right so I could head to the Perez Hilton party in time to see Thunderheist. There was no set time published, but I did know what band was on right before them. By searching Twitter (and letting it auto-refresh) for the other band’s name, I got a real-time update of when that band would hit the stage, and when they were about to finish their set. This let me stay at the dinner until the last second, then step outside to catch a cab, and still get to the party five minutes before Thunderheist hit the stage.

In addition, I fired off some @ replies to a few of the people at the party and was able to meet up with them when I got there. This is a great way to expand your network in a dynamic fashion.

Another useful Twitter-related program is Tweetdeck, which allows for custom groups. These act as filters that only show feeds of a specific set of people. I set up a group for all people I knew were attending SXSW, and this provided a concise feed of all SXSW-related activity. A number of other programs offer groups, but I find Tweetdeck to be the most flexible.

Another digital tool I found extremely useful was the SXSW 2009 Twitter Visualizer from Pepsi. This Flash application aggregated live Twitter feeds related to SXSW and plotted them on a map of downtown Austin. In addition to simply being entertaining to watch, it gave a continuously updated stream of information about who was at what club, where the lines were, and random things overheard across the conference. The end result is similar to searching Twitter, but the data comes at you via push versus pull, which can introduce you to new things that you hadn’t thought of or didn’t know about.

SonicLiving published a useful SXSW guide widget for plotting out a show schedule. The embeddable application allowed searching for bands, creating show calendars, finding other fans, and getting automatic concert updates. In addition to being accessible via a web browser, the site was optimized for iPhones to allow access on the go.

Another iPhone application called BandLoop is useful for discovering what is happening in your immediate area. The app determines your location based on GPS, then presents a map with selectable markers for nearby events. Tapping each item shows what bands are performing nearby, club info, and further details and links for the bands.

Continuing on the iPhone theme, no music fan’s pocket Mac is complete without the last.fm app. Coupled with their conference-specific SXSW Band Aid program, iPhone users can get a personalized list of suggested SXSW shows based on their last.fm account and the site’s recommendation service. This provides an excellent way to find new bands that you are likely to enjoy.

Plugging It All in

Each of these tools alone provides a deeply effective and efficient way to attend SXSW, but taking it a step further and combining them can create a festival experience with both immediate and future benefits. By using social networks, dynamic tracking, search capabilities, massive networking opportunities, and highly accessible scheduling tools, a SXSW attendee can truly maximize one of the most hectic and fun weeks of the year.

Jason Feinberg is the president and founder of On Target Media Group, an entertainment industry new media marketing and promotion company. He is responsible for business development, formulation and management of online marketing campaigns, and media relations with over 1,000 websites and media outlets. The company has served clients including Warner Bros. Records, Universal Music Enterprises, EMI, Concord Music Group, Roadrunner Records, and others with an artist roster that includes The Rentals, Thin Lizzy, Sammy Hagar, Primus, Poncho Sanchez, Ringo Starr, Chick Corea, and many more.

6 responses to “Maximizing the SXSW Experience with Social Media”