How to Teach Yourself About Social Media When J-Schools Fail 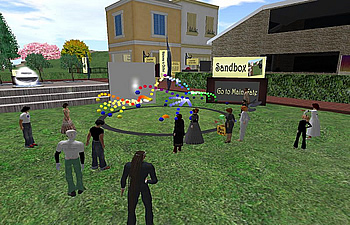 A gathering of participants in the Connectivism Course, discussing a 3D presentation of the information flow in the course. Picture taken in Second Life by "Fleep Tuque":http://www.flickr.com/photos/fleep/2868707349/in/set-72157607368558947/ via Flickr

Journalism is changing rapidly due to social media, and these changes can be bewildering as people wonder how to keep up. I recently gave a social media workshop for journalism students, and I soon realized that many students were still unaware of social media other than Facebook. They were shocked to hear about feed readers, blogs, or micro-blogging and asked how they could learn about all those developments.

It seems that we should rethink not only journalism, but also journalism education: Tomorrow’s journalists will need to take the initiative to teach themselves about rapidly changing technology. To that end, here are some ways that students can become their own teachers in regards to social media.

Tomorrow's journalists will need to take the initiative to teach themselves about rapidly changing technology."

In both the social media workshops I have organized in our own newsroom and the workshop I held for journalism students, participants were bewildered by the diversity of what we call social media: blogs, micro-blogging, vlogs, forums, wikis…

People also realize that not only are things changing rapidly but that the speed of change is also increasing. Some examples of radical change include:

> The first news websites were nothing more than frequently updated online versions of their parent newspapers. Now those same sites are vibrant communities.

> Readers do not necessarily reach the a web page by coming through the site’s home page; instead they come in through the stock quotes, through search engines, referring sites or feed readers.

ADVERTISEMENT
Journalism grads must teach themselves about social media

Colleagues and journalism students told me that they are not prepared for this. I realize my colleagues are extremely busy covering the financial crisis, and don’t have much time to study the continuous stream of innovations in social media. But I was more surprised to find that some major journalism schools, at least in Belgium, do not study social media. Students hardly know how to organize RSS feeds and have no idea how to use Twitter or Facebook in a newsroom context.

Students as well as colleagues wanted to know how they could keep up with developments in social media while not neglecting what they see as their main job: covering the news, providing insights, and facilitating discussions.

Crisis of journalism, crisis of education

Today, the importance of Big Media in our democracies is being challenged. At the same time, the role of classical schools and universities is also in question.

While educational institutions promote the idea of lifelong learning, they are not very flexible in facilitating such. This is not only a matter of inconvenient hours. It seems to me that educational institutions are focused on delivering certificates and evaluating their students. This model doesn’t make much sense in the case of adult, professionally active learners.

Such learners often don’t care about certificates. The only real test will be whether they can actually use their new knowledge and skills at their jobs and businesses. In our case, will they be better journalists? Will they be able to demonstrate results in terms of page views, unique visitors, reactions and time spent?

There are other venues now to get your news and analysis: blogs, Twitter feeds, virtual communities, social networks. Those same social media also make it possible to at least partially bypass the mainstream educational institutions. People often tell me that they learn more nowadays by writing a blog and engaging in blog conversations than that they could possibly learn in an old-school university setting.

Models to become your own teacher

The fundamental model of social media is that of collaboration. There are various ways to learn and teach by collaborating, but I would like to bring your attention to two broad categories.

> Informal networked learning simply refers to using social media to acquire skills, knowledge and connections, on an ad hoc basis: Passions and projects may change, and so will one’s position in the learning network shift. Informal networked learning allows more “lurking behavior” as one could just observe, for instance, and not contribute anything at all. Of course, it might be wise to make come contributions to engage in some conversation, but the idea is very much that of a passing traveler, who may very well leave in the morning.

A very interesting experiment in this regard was the Connectivism Course organized in 2008 and which will probably be repeated this year. According to the Wikipedia entry:

The course was free and open to anyone who wished to participate, with over 2,000 people worldwide signing up. The phrase “Massively Open Online Course” was coined to describe this open model. All course content was available through RSS feeds, and learners could participate with their choice of tools: threaded discussions in Moodle, blog posts, Second Life, and synchronous online meetings.

> Another way to learn through social media is through communities of practice. The community of practice is a group of professionals who invite apprentices to join them. The advantage for the students: They can find mentors who will not just explain technological tools, but will also introduce the students into the socio-cultural environment of the group — how journalists behave, what are their ethical principles, how journalists relate to other groups etc.

In exchange, like in all communities, a certain reciprocity is expected: students and participants should be active, at least by commenting or asking questions, exchanging ideas. The relationships are also in this case pretty informal, but there is still a sense of apprenticeship that offers more support for those wishing to enter the professional community. An absolutely interesting person to follow in this context is Howard Rheingold and his Social Media Classroom.

In the first case, just using informal networked learning, much depends on the skills and character that the individual learner has already acquired. If she is already mastering social media and has lots of experience in organizing her contacts in virtual communities, informal networked learning is a very natural thing to do. It is a matter of organizing relevant blogs in a feed reader, participating in online discussions, connecting to inspiring people using Twitter, Facebook, LinkedIn or virtual venues on Second Life.

A key difference between networked learning and communities of practice is the former’s emphasis on the individual, rather than the group. In the community of practice, the individual is important as well, but there is more of an idea of engagement toward a community, which has an importance on its own.

Our newspapers belong to a larger publishing group. I do hope to find some opportunities to encourage like-minded colleagues to start a community of social media practice. In our newsrooms, we often have journalism students come to work with us as part of their training. It would be very interesting to invite those young people into our community of practice.

Inevitably the issue will be whether the community should also open its virtual and physical doors for journalists from other, eventually competing, media groups. Would our publisher consider that “giving away” skills and knowledge to the competition, or would it be considered a collaborative model beneficial to all media participants?

This is a bit of a cliffhanger here, but I do promise to keep you informed on further developments… Please share your thoughts and ideas in the comments with your own take on these alternative ways for people to learn about social media.

Photo of journalism school grad by InSunlight via Flickr; photo of Howard Rheingold by UOC_Universitat via Flickr.