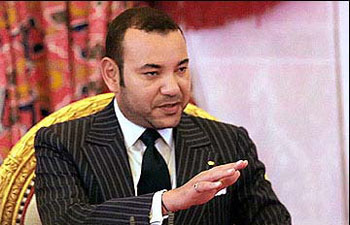 In 2008, Moroccan blogger Mohammed Erraji was arrested for insulting the king, seen above, in an article on the news website Hespress.

“When it comes to a monarchy, all reason goes away,” according to a Thai reporter quoted in a Reporters Without Borders report on free expression in Thailand published this week. He was commenting on the multiple charges of lese majeste — injury or insult to the king — brought against journalists and writers in his country, where speaking negatively about the king is viewed as tantamount to endangering national security.

Many monarchs or heads of state have a hard time dealing with criticism. Some manage to ignore it, others ensure that journalists employ self-censorship, but still others have decided to crack down on criticism, often using the charge of lese majeste. However, those seeking to silence criticism are finding themselves overwhelmed in the vast realm of communications created by today’s Internet.

All around the world, kings, princes, and despots are falling back on old laws mandating respect for their office to stifle online dissent."

Lese majeste differs from outright censorship in that it is often presented as libel, or as a personal offense against a head of State, rather than as a pure free speech issue. It is often used to silence those who express an inconvenient truth. Regular citizens as well as reporters can be prosecuted for this crime. To escape the stigma of censorship, some governments will prefer to prosecute reporters under lese majeste rather than under press laws.

The crime of lese majeste exists also in Spain, Jordan, Nepal, and the Netherlands but convictions are very rare. However, in 2007, two cartoonists with the Spanish magazine El Jueves were each fined 3,000 Euros for publishing a cartoon of the Prince of Asturias and his wife engaging in sexual intercourse. In the cartoon, the prince said: “Do you realize, if you get pregnant this will be the closest thing I’ve done to work in my whole life.” The comment referenced an announcement made by the government that it would pay Spanish couples 2,500 Euros for each new addition to the family.

A Round-Up of Repression

All around the world, kings, princes, and despots are falling back on old laws mandating respect for their office to stifle online dissent.

The clash between the authorities’ old habits and the new possibilities offered online was perfectly illustrated in Morocco in February 2008, during a widely publicized case involving Facebook. A Moroccan man, Fouad Mourtada, was arrested for pretending to be the brother of the king on the social networking site Facebook and was sentenced to three years in jail. He had insisted the fake profile was just a joke, and was released shortly after the incident when the king pardoned him. The BBC’s James Copnall in Rabat said the case shows that the royal family remains very much a taboo subject in Morocco.

The same year, Moroccan blogger Mohammed Erraji was arrested for insulting the king in an article on the news website Hespress. He was sentenced to two years in prison and fined 5,000 dirhams (US $500) at the preliminary trial after being found guilty of “disrespect for the king.” The Moroccan blogosphere, lively as ever, rallied around Erraji. An appeals court eventually rescinded his conviction, citing procedural irregularities.

Morocco’s north African neighbor, Tunisia, whose press freedom record is much worse, has shown little tolerance to criticism of the authoritarian leader President Ben Ali. Lawyer and human rights activist Mohamed Abbou was sentenced to three and a half years in prison in 2005 after being accused of posting an article on the Tunisnews website comparing the torture of political prisoners in Tunisia to that perpetrated by U.S. soldiers at the Abu Ghraib prison in Iraq.

Observers at his trial suspected the severity of the sentence was actually linked to a different article he had posted online a few days before his arrest, in which he criticized an invitation by President Ben Ali to Israeli leader Ariel Sharon to attend a UN summit in Tunis. In that article, Abbou also commented ironically on the alleged corruption within the president’s family. He was released in July 2007 after completing two-thirds of his sentence.

In Egypt, Adel Kareem Nabil Suleiman, better known by the pen name Kareem Amer, was arrested in November 2006 for articles published on his blog. Amer was known for criticizing President Mubarak’s government and top members of the country’s religious establishment. The blogger was sentenced in February 2007, to three years in prison for “inciting hatred of Islam” and one year for “insulting” the Egyptian president. He is still being held despite a huge international campaign to obtain his release.

Iranian President Ahmadinejad seems to have taken personal offense to criticism regarding his guard dogs. In 2007, Iranian officials arrested editor Reza Valizadeh, 31, over an article on the website Baznegar. Posted 10 days earlier and headlined Ahmadinejad’s Four Dogs, it detailed the exorbitant price (US $600,000) paid to obtain four guard dogs to protect the president’s office. The story, which was one of the first articles on the subject, was later picked up by the British newspaper The Guardian. Validazeh was released a few days later after his family managed to raise a 50,000 Euro bail by mortgaging their property.

There are many examples all over the world of lese majeste-style laws in action and countless Internet users have been arrested by repressive regimes that do not wish to admit to censoring anything that is considered critical, or too personal, about their rulers. These governments have either simply extended the same methods used to censor the mainstream media to the Internet or they have singled out a few bold bloggers to send a warning to other would-be Internet critics.

Coming back to Thailand, this monarchy does not engage in wide sweeping, systematic censorship to nearly the same level as some other nations, but it has still pursued the implementation of the lese majeste law to unprecedented heights. The new government that took the reins of power in December 2008 is eager to show its support for the monarchy, making it a priority to control Internet dialogue in the name of lese majeste.

In one month alone, almost 4,000 websites were blocked because of “damaging content to the monarchy.” More than half-a-dozen dissidents and writers currently have lese majeste charges pending against them. And the country’s new minister of information decided to spend about $2 million to set up an Internet filtering system, pushing the paranoia even further.

Reporters Without Borders has asked the king, who said in 2005 he was “not above criticism,” to launch a reform of lese majeste crime laws. If he does not stop the precedent being created, the new government’s zeal could transform Thailand into another Internet Enemy. This would be disappointing for a country that has in many ways been a model for press freedom in Southeast Asia. Let’s hope the king will be more offended by the abuses made by the government in his name than by what his critics are actually saying.

Whether it’s in Thailand or any other country where the crime of lese majeste exists, this charge should be reformed to prevent it from being used as a way to silence critics. It’s also up to the heads of state involved to show leniency and grant pardons to those who only expressed their opinions. The media’s duty to hold those in power accountable does not disappear just because a head of state invokes lese majeste.

Lucie Morillon is the Washington, DC, director of Reporters Without Borders, an international press freedom organization. She covers press freedom issues in the U.S. and abroad and is a spokesperson for the group. She also handles advocacy work with Congress and has appeared on CNN, ABC and has been quoted in the New York Times, Washington Post, and other publications. Reporters Without Borders strives to obtain the release of jailed journalists and cyber-dissidents and supports an independent media and the free flow of information online. Morillon is the free-speech correspondent for MediaShift.